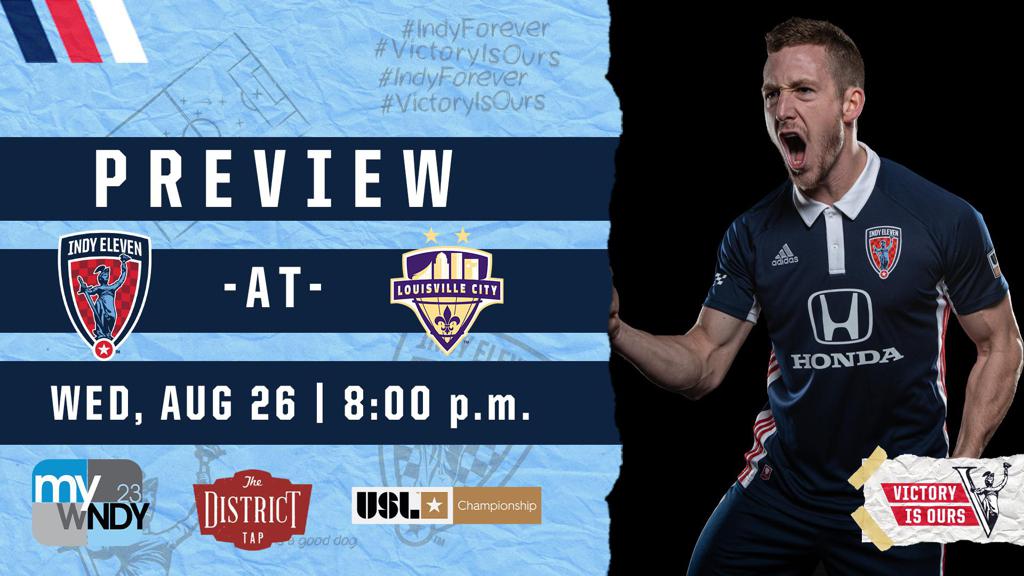 Indy Eleven will take a trip south to Lynn Family Stadium for a second time this month on Wednesday night to battle Louisville City FC in the latest chapter of the Louisville-Indianapolis Proximity Association Football Contest series. The two clubs last faced off in the Derby City on August 8, resulting in a 1-1 draw after Indy forward Tyler Pasher’s 59th minute strike neutralized Louisville’s early lead, tallied in the 3rd minute by Speedy Williams.

With three meetings on tap in as many weeks, Wednesday offers the chance for Indy to run away from its rival in Group E play, while LCFC can pull to within a game of Indy’s lead – with a game in hand.  LIPAFC Pt. 2 will be the last away game for Indy Eleven before it begins a five-game homestand that will span the month of September, kicking off with an immediate rematch against Louisville on Sept. 5.

Indy Eleven will enter Wednesday fresh off a bye week and a 1-0 home win against Group F heavyweight Pittsburgh Riverhounds SC back on Aug. 15. Indiana’s Team currently boasts the best record in Group E (6W-2L-1D, 19 pts.), and with a road record of 2W-1L-1D in 2020, Lou City’s new home will certainly not prove daunting.

Louisville City FC will enter the contest riding a two-game winning streak following a slow start to the restart of the season. After starting 2W-3L-0D to begin 2020, the Kentucky club has collected two wins and a draw since, helping it chase Indy Eleven and Saint Louis FC (4-3-2, 14 pts.) for one of the two playoff spots up for grabs from a crowded Group E.

When it comes to the most anticipated matchups of the season for Indy Eleven, it’s hard to top the fan-favorite Louisville-Indianapolis Proximity Association Football Contest. Going back to 2015, Indy Eleven has a record of 2W-4L-4D in the continuing LIPAFC rivalry in all official contests, including USL Championship regular season and postseason play and the Lamar Hunt U.S. Open Cup. Indy Eleven will look to get their first victory over Louisville since May 5, 2018, which would snap a seven-match winless streak against the 2018 & ’19 USL Championship victors.

The upcoming rendition of the series will be the second of the four scheduled games this season and the second in Louisville’s new home, Lynn Family Stadium. The first game between the two this season ended in a 1-1 draw, marking the third consecutive draw in regular season action between the sides. After this game, the next two will be on Indy’s home turf in Lucas Oil Stadium, where they have been largely unstoppable this season (4W-1L-0D).

Having first stepped in for Ayoze on July 18, defender Conner Antley will likely replace the Spaniard, who is out on a one-game suspension, again for his sixth start of the season. The 25-year-old has done well to martial the left wing in Ayoze’s place, making seven clearances, two blocks and three shots through his first seven appearances. With Antley’s pending rotation back into the starting lineup, this possibly leaves some room for defender Carl Haworth to return from injury as his counter along the right flank.

Following a one-year stint with South Georgia Tormenta FC where he earned USL League One’s Defender of the Year Award, the Georgia native has followed up his performance last year and has been an integral member of the Indy Eleven back line that has been nothing short of elite this season. He, along with his group, has conceded only seven goals in the season thus far, tied for third-least in the USL Championship. Antley will seek to continue his solid play against a Louisville offense that, while only scoring 11 times so far this season, has the firepower capable of putting up a big number on the scoreboard (Sporting KC II can confirm after LCFC dropped a season-high four goals on them last week).

Midfielder Napo Matsoso has been on fire since the first LIPAFC of 2020 on August 8. With two assists and two goals over a three-game period that also saw him earn two ‘Man of the Match’ honors, the 26-year-old will look to continue his hot streak at home against his Group E rival.

In his last outing, the afore-mentioned win over SKC, Matsoso had a phenomenal showing with a goal and assist that propelled Louisville City to a convincing – and important – victory over their in-group opponents. It will be interesting to see if the Lesotho native can continue his string of impressive performances against one of the league’s premier defenses.