Three Takeaways from the 2-1 Win vs. Sporting Kansas City II in Week 12 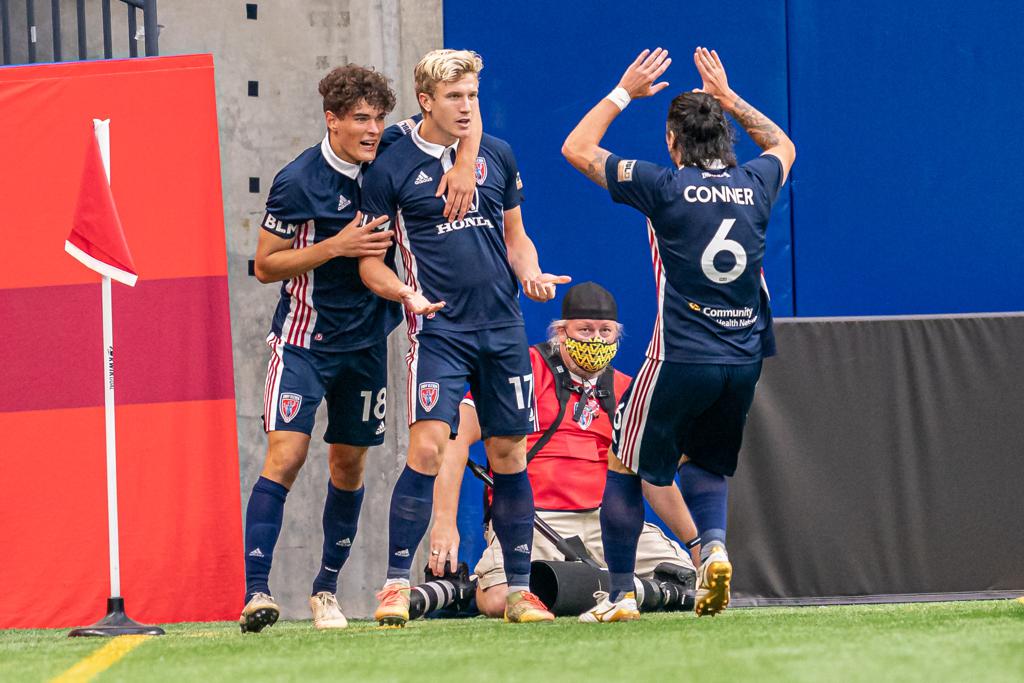 Each week in 2020, we will give our three takeaways from the performance of Indiana's Team. This week's edition comes after Indy Eleven defeated Sporting Kansas City II 2-1 in Week 12.

From Pasher to Scorers

Speaking much to his scoring ability, all of Indy’s goals since August 8 have come exclusively from Tyler Pasher. In July, Pasher was voted the USL Championship Player of the Month. At nine goals, the 26-year-old is the second highest scorers in the Eastern Conference – one goal behind Charlotte Independence frontman and former Eleven striker Dane Kelly – and is a top contender for the 2020 Golden Boot honors heading into the final stretch of the season. Again, this just speaks to how fantastic Pasher has been this season.

With Pasher out for last Wednesday’s game and competition for a USL Championship Playoff berth heating up, Eleven Head Coach Martin Rennie called upon the youthful striking duo of Nick Moon and Jeremy Rafanello to fill in for the team’s leading scorer vs. Sporting Kansas City II. Spoiler alert – they did not disappoint.

Moon’s opening goal in the 6th minute, spurred on by a beautifully lofted forward pass from Ayoze, was the first scored by someone other than Pasher in five games dating back to late-July. The 2019 USL League One All-League Second Team select also became the only person besides Pasher to find the back of the net multiple times on the season, scoring his first goal for Indiana’s Team in the dominating 4-1 victory vs. Hartford Athletic on July 29.

Moon’s goal had broken one 2020 milestone, but 20-year-old Rafanello doubled Indy’s lead in the 63rd minute when he scored his first professional goal since joining the team after participating in Indy Eleven’s open tryout in January. With two different strikers on the scoresheet and ten members of the squad finding the back of the net on the season, Indy continues to diversify its scoring portfolio.

Not only was last Wednesday the first time Indy Eleven scored more than once since July 29, it was also the first time Indiana’s Team scored multiple goals without one coming from Pasher in USL Championship play since October 16, 2019. With its stout defense, multiple goals are a recipe for success – Indy Eleven has not lost a game where it has scored 2+ goals since a 2-3 defeat at Pittsburgh Riverhounds SC on September 22, 2018.

With the rest of the team now knowing that they can score in big matchups, this might be the push that Indy has needed to reinvigorate the attack we saw early in the season – and go a long way in securing one of the two available playoff spots for Group E.

Welcome Back to the Ayoze Fan Club

This meeting will now come to order ... with 124 seconds of pure soccer zen.

You’ll note the usual cavalcade of dangerous services (from both set pieces and open play), swashbuckling dribbles, unapologetic shots from distance, lengthy switches dropped on a dime and veteran savvy to spare.

I know what you’re going to say ... “He does this every game, right?” Well, yes, but perhaps it’s because it’s been nearly a month since he’s graced the pitch that I feel the need to put together a 2-minute-plus appreciation reel to recognize his contributions. If you thought Indiana’s Team played with a bit more, shall we say, verve, in its approach on Wednesday, the return of the diminutive yet mighty Spaniard is the main reason why.

His stats on the night reflect some of what you just saw, including one assist, 83% passing accuracy, 7/11 duels won, a team-high five chances created, seven crosses (two completed, but still provided danger) and four fouls suffered (none conceded). But it’s the little things that make watching Ayoze alone worth the price of admission – and makes Indy a much more dangerous team, as they soak in his competitiveness, savviness and willingness to take positive risks.

Now that you’ve taken all that in, watch it again. You’re welcome.

Midfielder Drew Conner had an impressive showing last Wednesday when Sporting KC II came to town. The art of repetition is the key to success in most fields, including soccer, as SKC players were greeted by Conner in some way, shape or form at the start of nearly every attacking run, the former Chicago Fire homegrown’s head games continuously frustrating the visitors throughout the match.

Though repetition is one way to make your presence known, the mischief maker Conner put a stamp on his antics in the 26th minute with a cheeky fake out on Sporting’s Jake Davis to delay the restart of play:

Silliness aside, Conner’s on-field performance only added to Sporting’s headaches throughout the evening. Conner played the class clown in the best way possible, causing chaos and disrupting movement across the midfield – apparent by the bright green streak through the middle third on his heat map – ultimately resulting in the second-year signee entering 21 duels (11 won) during his 90-minute shift. Additionally, the 26-year-old tallied five tackles on the night, four of which were back-to-back slide tackles on two different players in both 45-minute stanzas:

With just four games remaining this season, including an important tilt against Louisville City FC, Conner’s brand of chaos will be a key component to Rennie’s lineup as Indy Eleven seeks to clinch a 2020 USL Championship Playoff berth.