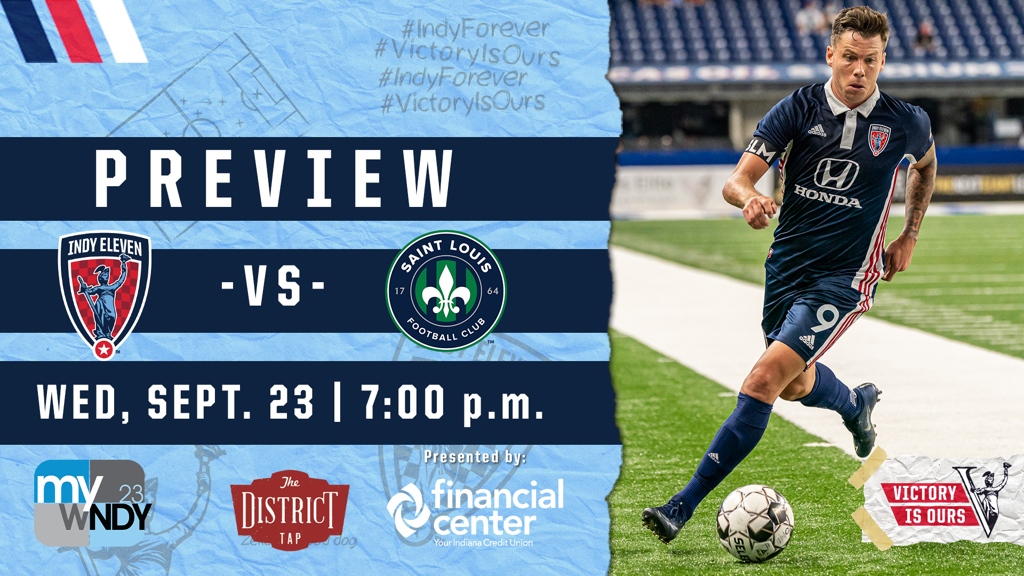 With the season winding down, Indy Eleven will look to create separation between itself and visiting Saint Louis FC in the chase for a playoff spot in Group E when they match up Wednesday at Lucas Oil Stadium. Indy will look to bounce back and earn a much-needed three points after falling to Louisville City FC last Wednesday in the last of the four-game series between the I-65 rivals, a result that made LouCity’s first place lead nearly insurmountable  – and setting up a fierce two-horse race between Indy and STL for the group’s second postseason berth.

That means there is plenty to play for on Wednesday in a game thick with playoff implications. Indy currently sits in second place on the Group E table with 22 points, with Saint Louis (21 points) right on its heels. With two of their three remaining regular season games taking place between each other – including an Oct. 3 season finale – it’s clear a postseason berth will log miles on I-70 across the next two weeks.

After falling short in two of its last three matchups against Group E opponents at home, Indy will look to bounce back and defend Lucas Oil Stadium as they host a Saint Louis FC team who has come out victorious  twice in its last three games – including a 3-2 win gained at the death versus Sporting Kansas City II over the weekend.

The all-time series between the Group E rivals has been split down the middle, with both teams taking two victories from the four games played dating back to 2019. In every game played between the two, the home team has always come out on top, with neither team being able to come away with a point as a visitor.

Indy Eleven started its 2020 ledger against Saint Louis FC – and its post-quarantine restart of the 2020 regular season – on July 11 at Lucas Oil Stadium by posting a 2-0 win on the strength of second-half goals by Tyler Pasher and Neveal Hackshaw. STLFC got its revenge at West Community Stadium on July 26, with Tyler Blackwood’s tally midway through the first half standing tall for a 1-0 win, despite Indy Eleven outshooting the home side 20-2 on the day.

In his first season with Indy Eleven following a six-year stint with Ottawa Fury FC, Haworth has, when healthy, planted himself firmly in Head Coach Martin Rennie’s first XI as the go-to on the right flank. After suffering a leg injury in mid-July that forced him to miss six weeks of action, the ex-Ottawa captain has recovered to start each of the team’s last four games.

Haworth has prided his game into making opportunities for his teammates and pushing the pace. The Canadian has two assists on the season, making him one of five Eleven players with a pair of helpers. Perhaps more importantly, even after missing five games he has the most crosses of anybody on the team with 29, providing a dangerous presence that forces defenses to pay attention to him on or off the ball all the way down the right sideline.

Playing against a Saint Louis team that has conceded eight goals while compiling a 1W-3L-1D record in five away affairs, look for Haworth to run at and disrupt the opposing defense, create opportunities for teammates, and provide a deadly right-footed option on set-piece opportunities.

Wharton has been leading the pack for STLFC this season – literally. His 1,100 minutes logged this season is the most on the team, stemming from starting nods in 12 of his 13 appearances.

All those minutes he’s playing are being used in a very efficient manner. His 87.4% passing accuracy (first on the team) and 68.1% long pass accuracy (second on the team) has allowed him to have team-leading four assists and 21 created opportunities on the year, all crucial to his club’s offensive success thus far.