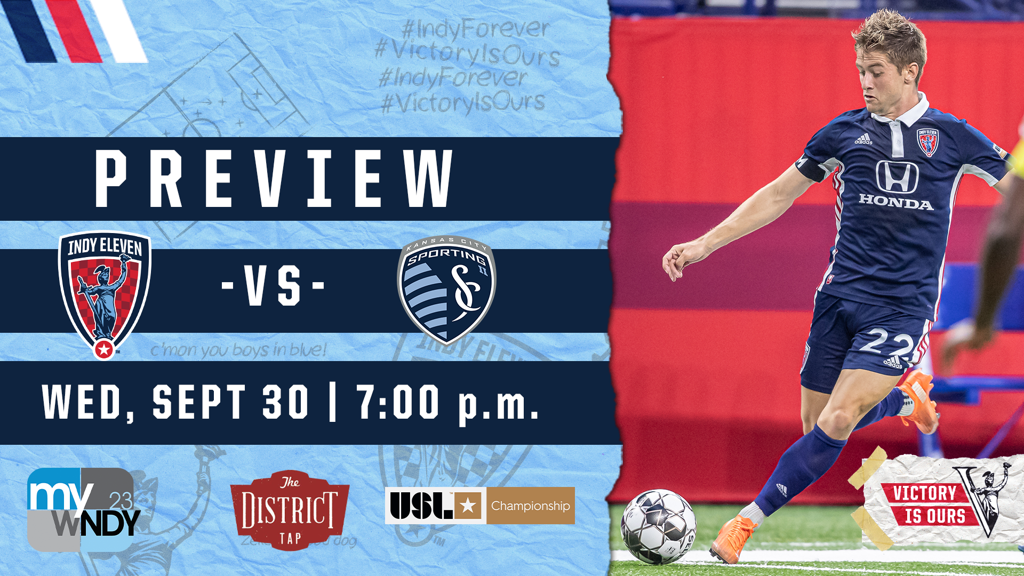 Indy Eleven can officially punch its ticket to the USL Championship Playoffs this Wednesday when it hosts Sporting Kansas City II for the fourth and final time this season. A win would put Indy Eleven (2nd, 23 pts.) four points clear of Saint Louis FC (3rd, 22 pts.), leaving the latter unable to overtake Indy for the second seed in Group E heading into the final weekend of the regular season.

Sporting Kansas City II was officially eliminated from playoff contention on September 19 after a heartbreaking 3-2 loss at Saint Louis. With nothing left to lose, Sporting KC II will look to play spoiler, as a win or a draw for the visitors could turn Saturday’s regular season finale between Indy and Saint Louis into a must-watch affair.

This match caps off a five-game homestand and will be the regular season home finale at Lucas Oil Stadium for Indiana’s Team. So far this season, Indy Eleven has a home record of 5W-3L-1D, with a 1-2L-1D record during the current home stint, with the lone victory coming from a 2-1 win over Sporting Kansas City II.

Indy Eleven will look to improve upon its 4W-1L-0D record against Sporting Kansas City II, a series that began last year after the “artist formerly known as Swope Park Rangers” jumped to the USL Championship’s Eastern Conference.

Indy kicked off the first of four home matches against SKCII on July 18 in a thrilling 2-1 win against the visitors. Indy forward Tyler Pasher opened the scoring – his fourth goal in three games – at the edge of the first half, but it was long into the second stanza before SKC’s Wilson Harris leveled the game. Eleven captain Paddy Barrett stepped up and put the game-winning goal into the net just after the hour mark. Their second meeting on August 1 marked a historic win for Sporting KC II, as their shock 1-0 upset powered by Daniel Barbir’s 70th minute tally snapped Indy Eleven’s 28-game home unbeaten streak and 11-game home winning streak. Indy got its revenge the following game, posting another 2-1 win on September 9, this time Nick Moon finding the back of the net for the second time this season and forward Jeremy Rafanello notching his first professional goal in the second half.

Lindley has been a game-changer for the Indy midfield in recent weeks. The Carmel native has been a staple for Head Coach Martin Rennie’s starting lineup in the second half of the season, starting in five of the last six games for his squad.

Lindley was a nuisance to the Saint Louis defense last time out, making sure he was being as difficult to contain as he could be. While the likes of Moon and Pasher were tasked with leading Indy’s attack, it was on Lindley to play creator, as he spent majority of the night buzzing just outside STL’s 18-yard box, creating two chances for his teammate and placing two of his own shots on target.

Going against a Sporting Kansas City II team that has conceded 27 goals this year, look for Lindley to carry the momentum from his last outing into Wednesday night to open up and create more opportunities.

Barbir has been a key player in SKCII Head Coach Paulo Nagamura’s defensive build this season, having made 13 of 14 possible appearances so far this season, 11 of which in his team’s starting lineup. The 22-year-old from Allentown, Pa. has been a leader in the backline, currently ranking top three among his teammates in clearances (2nd, 49), block (1st, 10), interceptions (3rd, 20), aerial duels (3rd, 32), and aerial duels won (2nd, 15).

Although he prefers to showcase his talents on the defensive side of the field, Daniel Barbir has been able to demonstrate his scoring abilities this season, netting two goals on four shots on the year, one of which was the game-winning goal against Indy Eleven on August 1. While Wilson Harris remains the main scoring threat for Sporting KC II, it will be a team effort to limit Barbir’s movement throughout the evening.