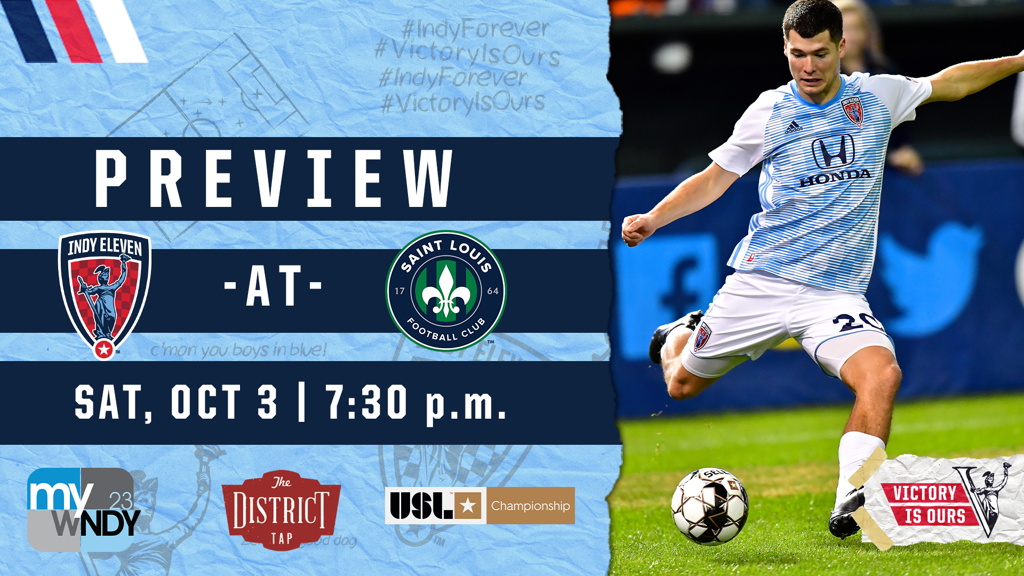 A postseason berth is on the line as Indy Eleven travels west to Saint Louis FC in its 2020 USL Championship Regular Season finale this Saturday. With Indy currently in second place in Group E (23 pts.) and STL sitting right behind in the standings (22 pts.), a draw or victory will be needed for Indiana’s Team to clinch the group’s second seed and the team’s third playoff berth in as many season.

The Missouri side is currently riding a two-game winless streak, a statistic that will have to change if it wants to continue playing after October 3. Sitting in third place, just one point behind Indy Eleven, Saint Louis needs all three points out of Saturday’s affair to advance to the playoffs. Any other result will see Saint Louis permanently end its USL Championship run after six season as the organization announced on August 25 it would cease operations at the conclusion of the 2020 season.

The series history between the I-70 sharers has seen both sides evenly split regular season points since its 2019 berth at 2W-2L-1D, with both clubs registering wins when they have homefield advantage.

Indy Eleven started its 2020 ledger against Saint Louis FC – and its post-quarantine restart of the 2020 regular season – on July 11 at Lucas Oil Stadium by posting a 2-0 win on the strength of second half goals by Tyler Pasher and Neveal Hackshaw. STLFC got its revenge at West Community Stadium on July 26, with Tyler Blackwood’s tally midway through the first half being good enough for a 1-0 win, despite Indy Eleven outshooting the home side 20-2 on the day. In the last outing at Lucas Oil Stadium on September 23, STLFC’s Russell Cicerone secured the lead in a chippy affair that saw the visitors end the night with nine players on the pitch, but a second-half equalizer off Hackshaw’s head brought both teams level into the final whistle.

Both teams close out the season against each other in this Saturday’s regular season finale in the Gateway to the West that will see one team lock in its place in the 2020 USL Championship Playoffs.

Now in his third season with Indy Eleven, Ouimette has firmly established himself into Head Coach Martin Rennie’s backline. The Repentigny, Quebec native has started all 14 games he’s appeared in this season, tied with ‘keeper Evan Newton and Hackshaw for second most minutes played this season at 1,260, trailing behind only last year’s “Ironman,” Tyler Gibson (1,295).

So far this year, the Canadian has been a thorn on every opposing attack’s side, placing top three in all major defensive categories for Indy Eleven – clearances (2nd, 35), blocks (2nd, 9) and interceptions (3rd, 17). Moreover, Ouimette leads the team in duels won (93), aerial duels (87), aerial duels won (58) and tied with midfielder Drew Conner for more tackles won (17).

In his last game against Saint Louis, Ouimette won 10 of the 12 duels he was involved in, in addition to winning five of his six aerial duels. The 28-year-old has a knack for blocking opposing traffic, capitalizing on opportunities to regain possession that often kickstart counterattacking runs into the opponent’s half. Look for the eight-year veteran to handle business in the defending third Saturday evening as he and the rest of Indiana’s Team fight for a postseason run.

Cicerone has debatably been the most dependable player for Saint Louis FC Head Coach Steve Trittschuh’s attack this season, playing in all 15 contests played this season –  starting in 14 of them – and clocking in the second most minutes played among his teammates at 1,256.

Cicerone has been the bane of Saint Louis’ opponents all season. Mostly lurking around the upper right corner of opponent’s 18-yard boxes, Cicerone spends his game antagonizing defenders with an offensive onslaught. The second-year midfielder currently leads his team in shots (34) and shots on target (18), and is tied with forward Tyler Blackwood atop the scoring table with five goals. Although he hasn’t been able to assist on any goals, Cicerone leads his side in chances created (24), adding another layer of frustration for opposing defenders to carefully monitor.

Last time he played against Indy Eleven, Cicerone’s 50th minute goal was enough for STLFC to come out of Lucas Oil Stadium with a point in a 1-1 draw on September 23. With Saint Louis now in a “winner takes all” scenario heading into the final weekend of the regular season, Indy defenders will need to keep level heads to minimize Ciceroni’s attacking opportunities.