In Conjunction with Club’s Newest Corporate Partnership, Fans Can Vote on Style, Name & Can Design for New Beverage 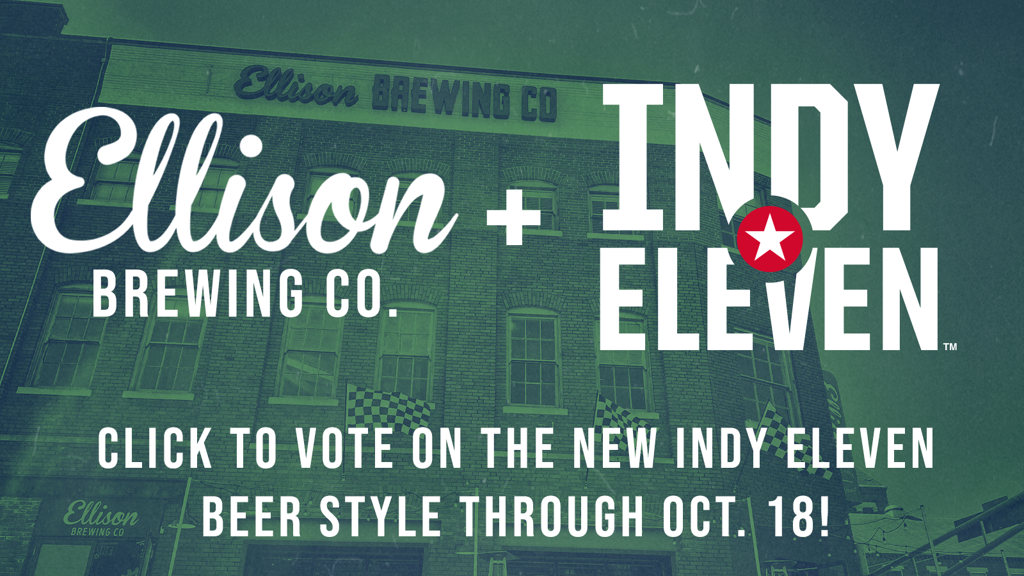 Few things go together quite like beer and soccer, which is why Indy Eleven is excited to team up with Ellison Brewing Co. on a corporate partnership that features the Indianapolis and Lansing, Mich.-based brewer as the newest Craft Beer Partner of Indiana’s Team.

To celebrate the partnership, Ellison Brewing Co. will be adding a new Indy Eleven-inspired beer to their lineup of quality craft beers being served at their production taproom and restaurant at 501 S. Madison Avenue, practically in the shadows of Indy Eleven’s home of Lucas Oil Stadium.

“Indy Eleven is excited to partner with a great local business in Ellison Brewing Co. We are particularly thrilled to launch the campaign behind the creation of a beer our fans can truly call their own, as they will be involved in the process from start to finish,” said Dan Dripps, Indy Eleven Manager, Corporate Partnerships. “Having the beer brewed only a couple blocks away from our home stadium gives this collaboration a neighborhood feel, which will make giving our fans a drinkable beer they can enjoy all season long at Lucas Oil Stadium in 2021 even more special.”

“Ellison Brewing Co. is happy and proud to partner with Indy Eleven, and to bring its fans a custom beer that they deserve ahead of next season,” said Aaron Hanson, Ellison Brewing Co. Owner and Brewer. “Using Eleven fans to source the style, label design, and first batch brewing for a beer that will be made two blocks from their stadium is a fantastic experience for everyone involved. We at Ellison Brewing are excited for the 2021 season!”

Soccer fans and beer lovers (and the sizeable cross-section of both) can have their say regarding various aspects of the new brew, as Indy Eleven and Ellison will conduct polling beginning immediately to capture preferences for the beverage’s style, name, and can design via indyeleven.com/Ellison.

The persons whom submit the winning name and can design will receive a prize package including a four-pack of the new beverage, co-branded “Eleven + Ellison” pint glasses, and additional items.

Ellison Brewing will plan to have the final collaboration libation available for purchase in its taproom in mid-December, allowing the opportunity to gift four-packs of the new brew to the soccer and beer lovers in your life!

For more information on Ellison Brewing Co. – including menus for its award-winning beers and exceptional cuisine – visit ellisonbrewingindy.com.