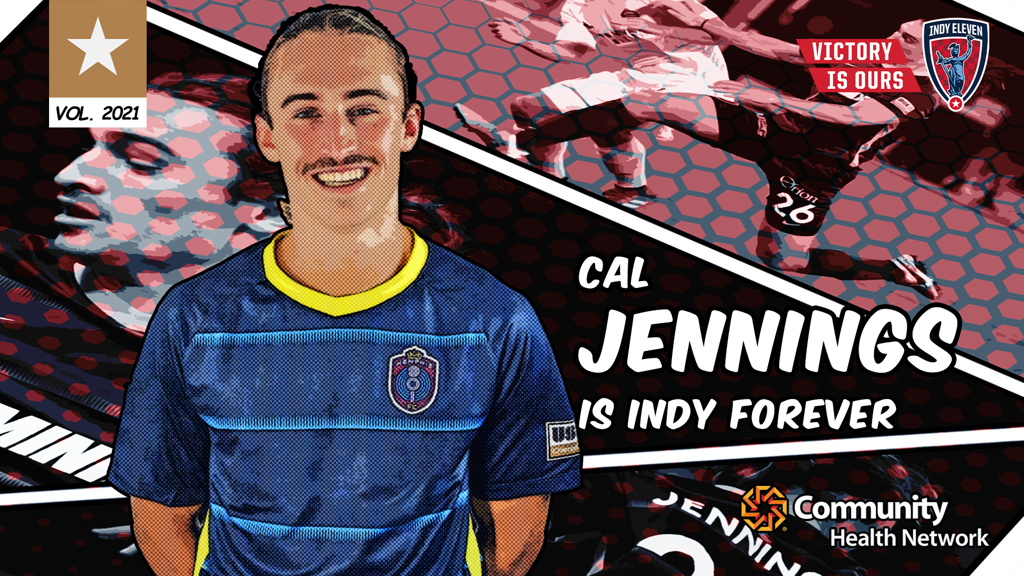 Indy Eleven started to address its offensive attack with the club’s first new signing of the offseason in forward Cal Jennings. Terms of the contract that brings last season’s leading scorer from Memphis 901 FC and one of college soccer’s most prolific goal scorers in recent years to Indiana’s Team will not be disclosed.

“I'm extremely excited to get started with Indy Eleven. From the professionalism of the club to the quality of the people I've met so far within the organization I'm sure this will be a great fit,” said Jennings. “I'm looking forward to interacting with the fans and serving this club and my teammates to the best of my ability.”

Fans can hear more from the new Eleven striker when Jennings joins host Greg Rakestraw on this weekend’s edition of Soccer Saturday, airing live on 107.5/93.5 The Fan Saturday morning at 9:00 a.m.

Jennings is now the tenth player solidified on the Indy Eleven roster ahead of the 2021 season, joining nine carryovers from last year’s squad:

Discussions with additional players from last season’s squad are ongoing, as are new player acquisitions. The club will make more roster transactions official in the coming weeks and into early 2021.

The 23-year-old Jennings notched nine goals and one assist across his 14 appearances (five starts) during his rookie season with Memphis 901 FC in 2020. The center forward earned a move into the starting XI late in the season and more than proved his worth once there, scoring eight times in Memphis’ final four games. Three of those four matches saw the Atlanta native notch multiple goals, including a season-ending hat trick against post-season bound Birmingham Legion FC in their Oct. 3 season finale that earned him the league’s Player of the Week honor for Week 15.

“We are excited to bring Cal Jennings to Indy Eleven. He is a natural goal scorer with a fantastic goal scoring record,” said Indy Eleven Head Coach Martin Rennie. “Finding dynamic attacking players has been a key focus of our offseason recruitment plans, so we are very pleased to bring one of the most exciting young players in the USL to our club.”

Jennings enjoyed a standout collegiate career at the University of Central Florida from 2016-19, compiling 46 goals and 16 assists across 64 appearances. Jennings’ 20 goals as a junior in 2018 were the second most in the NCAA and an American Athletic Conference (AAC) single-season record, which he followed by scoring a national co-leading 18 goals in his senior season in 2019.  ­­His impressive offensive output helped him earn the AAC Offensive Player of the Year Award in 2019 and All-AAC First-Team and United Soccer Coaches First Team All-American nods and a spot as a MAC Hermann Trophy semifinalist in both 2018 and 2019. Jennings was drafted in the first round (17th overall) of January’s 2020 MLS SuperDraft before beginning his professional career by signing with Memphis 901 FC in July.

To keep track of Indy Eleven’s roster as its fourth campaign in the USL Championship approaches, visit indyeleven.com/2021-roster.

Want to watch Cal and the rest of the Boys in Blue in action in 2021? Limited edition Holiday Gift Packs featuring ticket vouchers and $25 deposits for 2021 Season Ticket Memberships are now available! Learn more and secure seats for next season by visiting indyeleven.com/tickets or calling 317-685-1100.