Get to Know: Cal Jennings 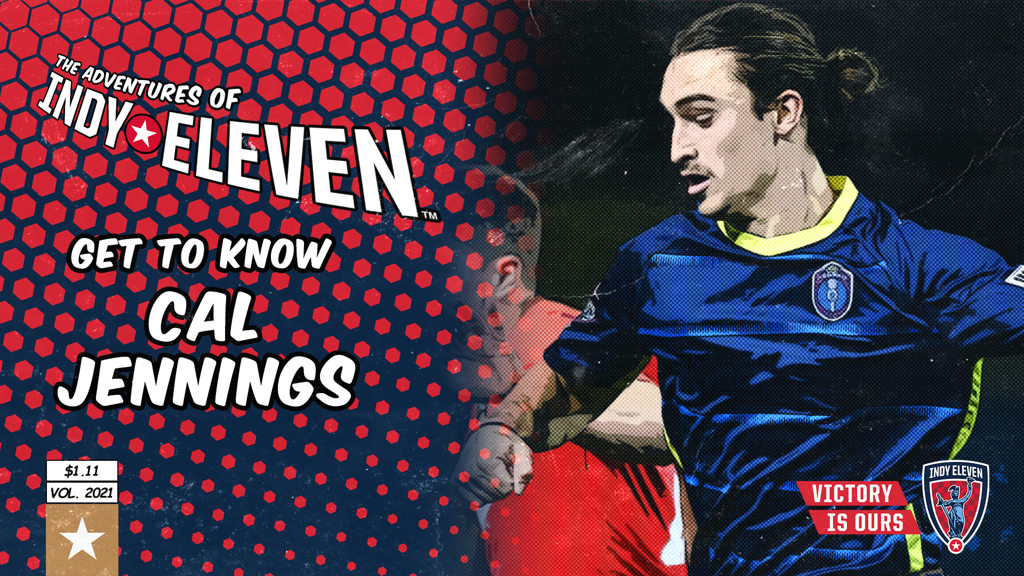 Want to know more about our latest signings? Throughout the offseason, we'll be asking all of our new Boys in Blue 11 questions to help you get to know them before we kick off the 2021 USL Championship season. Sit back and check out the Q&A below to get to know Georgia native Cal Jennings.

CJ: “Oh, man! I eat all day long, so I’m going to have to think about this for a little bit. I like a good trail mix. That’s not a junk food, but whether it’s with granola, different nuts, M&M’s or something, I like that a lot. Junk food…I would say Chik-fil-a. Chik-fil-a is considered junk food. I’d say a good Chik-fil-a sandwich.”

CJ: “Oh my goodness. You’re hitting me with the hard ones. Let me think about that. So, I’m a big Marvel fan. I like all of the Avengers and I’ve liked all of the different Marvel movies they’ve come out with. I would say 'Avengers: Infinity War', that’s a recent one that I really like.”

CJ: “Well, Indy Eleven, of course. That’s the one that I’m playing for. Outside of Indy Eleven – so, I’m one of those people that roots for the underdog for the most part. I don’t necessarily have a favorite team, but I loved when Leicester City FC won the Premier League in 2015-16. I was all in. I was a bandwagon fan for it because I obviously didn’t grow up a Leicester fan, but I like the whole idea of a Cinderella story – somebody that isn’t necessarily supposed to win, but they succeed and do well.”

CJ: “I would’ve liked to have dinner with Martin Luther King Jr., to meet and have a conversation with him. For obvious reasons, but also because he seemed like someone who was really grounded in who he is in his faith. Also, genuinely sharing love with others. Even those who didn’t treat him well, those who were against him, he responded in love all the time. That’s somebody I would love to meet.”

CJ: “I’m not actually one that listens to too much before games. I like music, but I’m not one that needs music to pump me up. But some of the genres I like, I like country music – I’m from Georgia, so that might be a given. I also got into Afrobeat in college because my roommate was from Ghana. Stonebwoy is an artist you may have never heard of, but one that I like to listen to.”

CJ: “I heard one recently. This isn’t really a superpower, but to be able to have at a short notice the statistics of everything I’ve done in my life. Not necessarily related to sports, but a grand list of statistics would be funny to have.”

CJ: “Okay, here’s something. It’s not something that no one else knows, but a lot of people wouldn’t know this. I use it as an icebreaker when I’m in a group and need one. I didn’t eat a peanut butter & jelly sandwich until I was 21 [years-old] in college. So, that’s my icebreaker. The reason being is that my brother is allergic to peanut butter. I looked up to my older brother growing up, so I would tell people I’m allergic to peanut butter. I didn’t want to try it and then I got to college and I was like ‘I really like PB&J sandwiches.’ That’s a snack that I go to.”

CJ: “I think in the soccer would – and I don’t necessarily agree with this because he’s a big dude – Zlatan Ibrahimovic. I get that just with the mustache and the long hair. I’ve actually gotten Matthew McConaughey a couple times, but I don’t know if I necessarily see that. I don’t know, we’ll see. Maybe we’ll give the fans a chance to roast me and see if I have a celebrity lookalike.”

CJ: “I’m excited to get to know the team, to build relationships with my teammates. To go in day in and day out trying to get better and to bring success to Indy this year, where ultimately, we want to win a championship. That’s everyone’s goal going into it, but Indy seems like the perfect place to do so.”