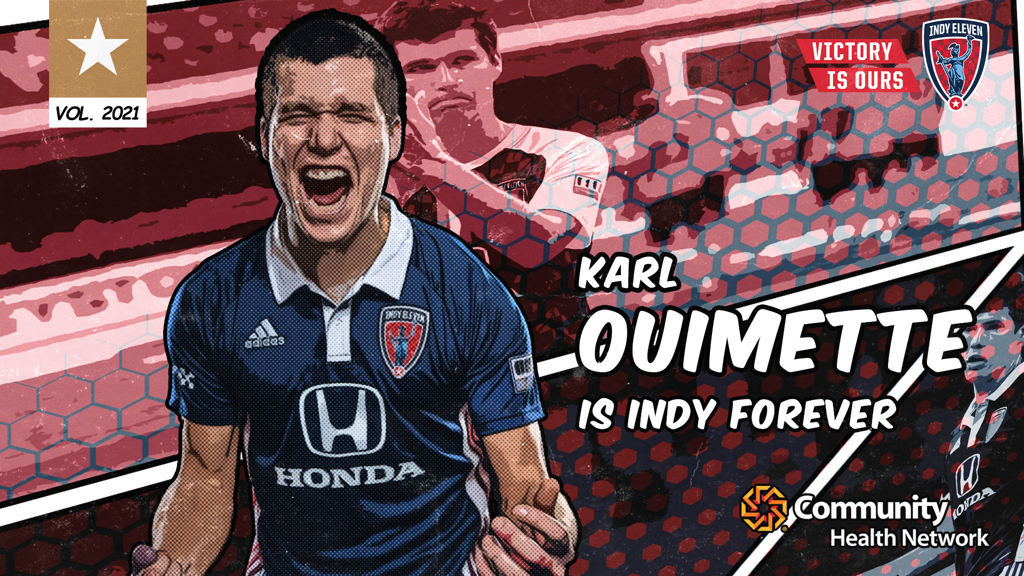 Indy Eleven’s first player transaction of the 2021 calendar year marked the return a familiar face to Indiana’s Team via the re-signing of defender Karl Ouimette. Terms of the contract keeping the veteran center back a member of the Boys in Blue will not be disclosed.

The 28-year-old Ouimette joins goalkeeper Jordan Farr, midfielder Ayoze, and forward Tyler Pasher as the longest-tenured players on the Indy Eleven roster, with the quartet preparing for their fourth seasons in Indianapolis. Ouimette is also one of ten players from last year’s squad confirmed to return to the 2021 roster, which currently stands at 12 signings:

Discussions with additional players are ongoing, and the club will make more roster transactions official in the coming days and weeks. To keep track of Indy Eleven’s roster as its fourth campaign in the USL Championship approaches, visit >indyeleven.com/2021-roster.

“To all the fans and members of the organization, I’m beyond excited to come back for my fourth year with the club,” Ouimette exclaimed. “Indy has become my home away from home, and I cannot wait to get this season started and to give it my all.”

One of the most dependable members of the Eleven’s “USL era” since 2018, Ouimette continued to provide steady play as a member of Head Coach Martin Rennie’s three-man backline in 2020, when he started 15 of the team’s 16 regular season games and finished tied for second with 1,350 minutes played. The native of Repentigny, Quebec, finished at or near the top of every defensive category for the squad last season, registering 65 of 94 aerial duels won (both 1st), 105 duels won (1st), 38 clearances (2nd), nine blocks (2nd), 20 interceptions (2nd), and 18 of 27 tackles won (both 2nd).

“Karl has been a pivotal contributor to our defense and our team culture, and we are thrilled to bring him back as a part of our core group for 2021,” said Rennie, who has coached Ouimette for all three of their seasons in Indy from 2018-20. “He has proved to be one of the most dependable players in the USL Championship in recent years, and his familiarity within the squad should make him as vital to our success as ever next season.”

No player has made more appearances in USL Championship action for Indy Eleven than Ouimette, who has scored six goals and notched two assists (both in 2020) across his 77 regular season and postseason games with the Boys in Blue. For more on Ouimette’s nine-year professional career to date, including his “caps” for the Canadian Men’s and Youth National Teams, click here to visit his indyeleven.com bio page.

Fans can hear more from Ouimette & Rennie when they join host Greg Rakestraw on this weekend’s edition of Soccer Saturday, airing live on 107.5/93.5 The Fan at 9:00 a.m. and available for download shortly afterwards on most popular podcast platforms.

Want to watch Karl and the rest of the Boys in Blue in action in 2021? For just a $25 per seat deposit, 2021 Season Ticket Memberships can be yours! Learn more and secure seats for this season by visiting indyeleven.com/tickets or calling 317-685-1100.