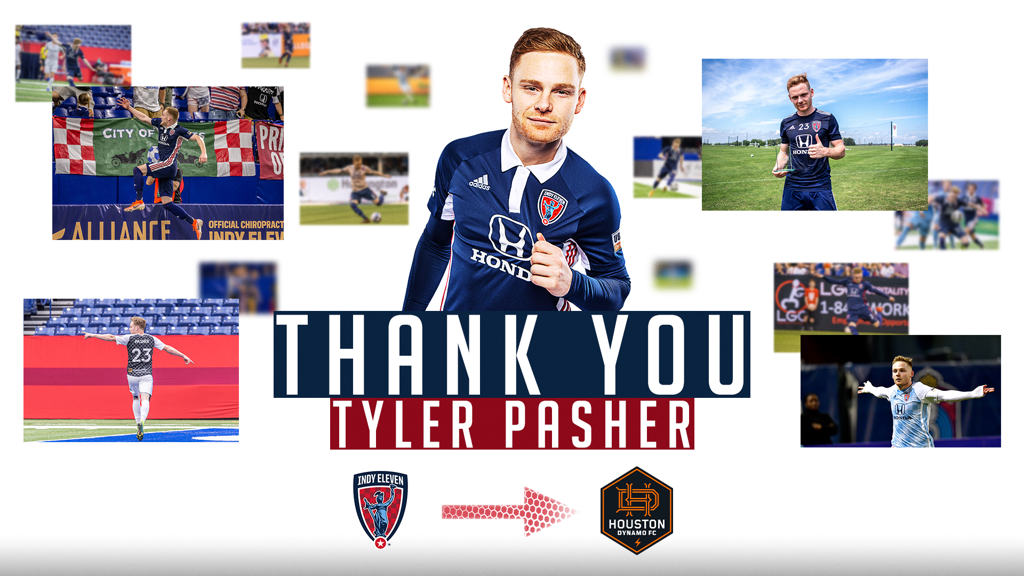 Indy Eleven has announced a transfer agreement with Houston Dynamo FC of Major League Soccer that sent forward Tyler Pasher to the Texan side, effective immediately. Terms of the agreement resulting in Pasher’s return to MLS following three seasons with Indiana’s Team will not be released, per club policy.

“We are very pleased that Tyler has the opportunity to play in Major League Soccer with Houston Dynamo FC. He has produced some great moments of individual brilliance over the last few seasons and I’m sure our fans will wish him well as he moves forward in his career,” expressed Indy Eleven Head Coach Martin Rennie. “It has been great to see Tyler develop as a player during his time here in Indy and I want to personally thank him for his significant contribution to the team.”

Pasher joined Indy Eleven in the build up to its 2018 season after suiting up for MLS side Sporting Kansas City and its USL Championship affiliate, then known as Swope Park Rangers, across the 2016-17 seasons. Following an injury-shortened 2018 slate with Indiana’s Team, the converted outside back flourished after moving into the team’s attack in 2019, registering 13 goals and four assists during a campaign that culminated with him scoring in the USL Championship Playoffs Eastern Conference Final.

The 26-year-old striker picked up where he left off in 2020, as he sat atop the league’s scoring chart for much of the season before ultimately finishing with 10 goals and a pair of assists in just 15 games. Pasher’s performances last year earned him plenty of accolades, including July’s USL Championship Player of the Month award, a #1 spot on ESPN SportsCenter’s “Top Ten”, and placement on the Championship’s All-League Second Team alongside teammate Neveal Hackshaw.

“Thank you to all the fans, staff and my teammates for a wonderful three years. Everyone in the Indy Eleven organization helped me get through a challenging time in my career, and that really boosted me and got me to this point,” explained Pasher. “Indy Eleven gave me the opportunity to really express my ability and to find out who the player is that I want to be, and the player that I could be. I will always be ‘Indy Forever.’”

In all, the native of Elmira, Ontario, tallied 24 goals and seven assists across his 60 games in USL Championship regular season and postseason action on behalf of Indiana’s Team. His 24 goals place second on the club’s career scoring chart behind only Eamon Zayed’s 27-goal output from 2016-17.

With today’s transaction, the roster of players committed for Indy Eleven’s 2021 season currently stands at 13 members:

Indy Eleven 2021 Season Ticket Memberships are now available and can be saved for just a $25 per seat deposit! Secure tickets for every game this season and learn more about exclusive savings and benefits by visiting indyeleven.com/tickets or calling 317-685-1100.