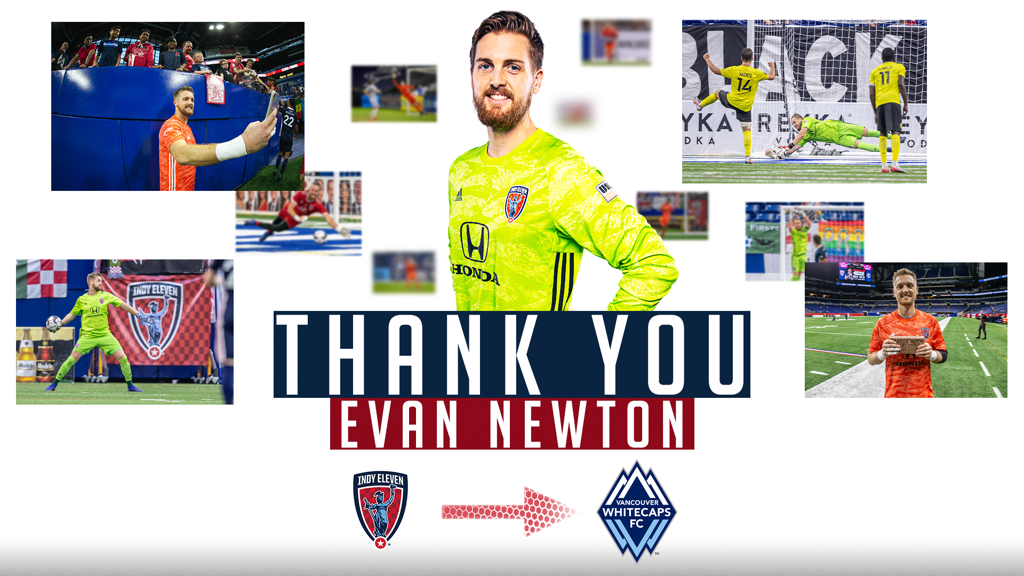 Terms of the transfer that sees Newton head west after two seasons with Indiana’s Team will not be released, per club policy. Newton becomes the second Indy Eleven player in recent weeks to transfer to an MLS club, following on the heels of Tyler Pasher’s move to Houston Dynamo on Jan. 14.

“I really want to thank all the players, staff, front office and especially the fans for the last two years of my journey here in Indy,” said Newton. “We’ve had some awesome accomplishments together, and I really hope the club continues to progress as one of the top clubs in the USL Championship. It’s been a pleasure being a part of such a great organization, and I’m truly grateful for all the growth and support they’ve given me throughout my time here.”

While Indy Eleven had re-signed Newton to a new contract last November, the veteran goalkeeper’s play with Indiana’s Team made it no surprise that he would earn interest from Major League Soccer sides. During the last two USL Championship campaigns with Indiana’s Team, the league’s 2018 Golden Glove winner (as a member of FC Cincinnati) compiled a record of 21W-15L-6D, a 1.03 goals against average, and 12 shutouts across 42 appearances (all starts).

“It has been great to get to know Evan and his family over the last two years in Indianapolis.  I want to thank him for his contribution to the Indy Eleven,” said Indy Eleven Head Coach Martin Rennie. “He has done an excellent job for the team and I wish him well with the opportunity he now has in front of him.”

Newton departs the ranks of the USL Championship as its career leader in both shutouts (50) and saves (478). The Virginia Beach native compiled his impressive numbers while backstopping some of the league’s premier squads over the last decade, including Tampa Bay Rowdies (2011), Sacramento Republic FC (2016-17), FC Cincinnati (2018), and the Eleven (2019-20). Newton’s addition to an MLS roster comes almost exactly ten years after his professional career kicked off by being selected in the first round of the 2011 MLS Supplemental Draft by the Houston Dynamo.

While the Newton transfer brings Indy Eleven’s number of signed players to 13, an additional signing within the next 24 hours will bump that number back up to 14. The roster as it currently stands is as follows:

Want to watch the Boys in Blue in action in 2021? Indy Eleven Season Ticket Memberships are now available and can be saved for just a $25 per seat deposit! Secure tickets for every home game this season and learn more about exclusive savings and benefits by visiting indyeleven.com/tickets or calling 317-685-1100.