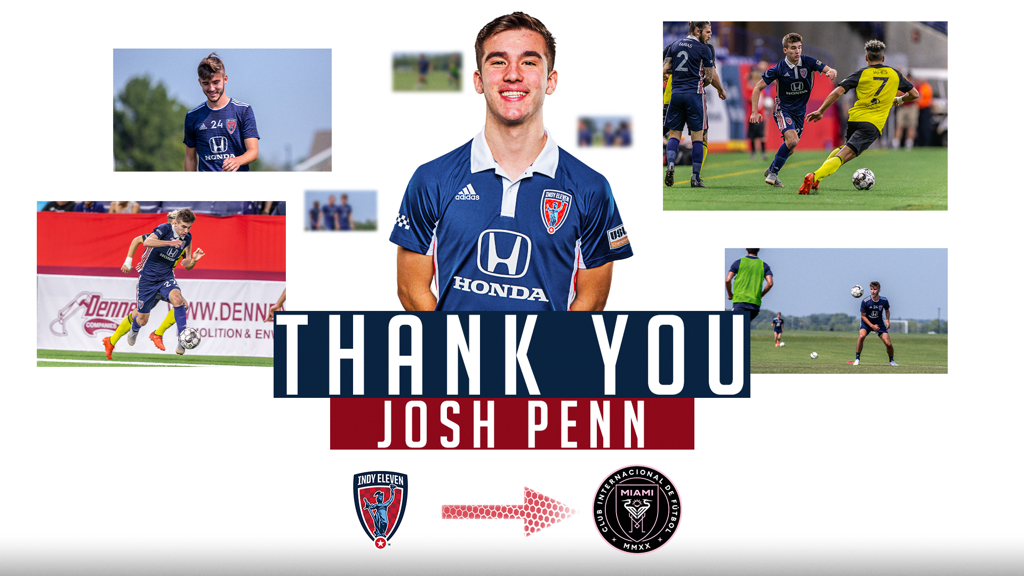 Indy Eleven today announced a transfer deal with Inter Miami CF that will see forward Josh Penn join the Major League Soccer side, effective immediately. Terms of the agreement that sent the promising 20-year-old striker to the South Floridian squad will not be released, per club policy.

Penn followed forward Tyler Pasher (Houston Dynamo FC) and goalkeeper Evan Newton (Vancouver Whitecaps FC) as members of Indiana’s Team who have joined the ranks of Major League Soccer via transfers over the last month. Inter Miami secured the MLS player rights to Penn after selecting him in the first round (10th overall) of the 2021 MLS SuperDraft on January 21.

“Josh has been a pleasure to work with in the time he has been with us,” said Indy Eleven Head Coach Martin Rennie. “He is a player with a lot of talent and an excellent work ethic. We look forward to watching his progress and wish him well as his career develops.”

After blazing a trail as Indy Eleven’s first USL Academy contract signing during the 2019 preseason, Penn also became the first Academy product to sign with Indiana’s Team as a professional when he re-joined the squad last August. While he did not suit up across the second half of the Eleven’s shortened 2020 season, Penn started two of his five appearances in 2019, the then-18-year-old taking a pair of shots across his 157 minutes of USL Championship regular season action.

“Indy Eleven will always have a special place in my heart. The staff took a chance on me when I was a teenager and gave me a taste of the professional game at an early age. The players there were so welcoming and truly helped me develop throughout me time there,” stated Penn. “Lastly, the fans and supporters made me feel at home from the moment I got there. Indy Eleven truly is a special place and organization. I can’t thank everyone at the club enough for what they’ve given me.”

In between stints with the Boys in Blue, Penn enjoyed a successful freshman season at Indiana University in fall 2019. His six goals and two assists helped the Hoosiers to the Big Ten regular season and postseason tournament titles, and earned the native of Naperville, Ill., selections to the All-Big Ten Second Team and the All-Big Ten Freshman Team.

Indy Eleven’s roster now stands at 16 players, with at least two more player additions set to be made official in the coming days. To see the squad as it currently stands, visit the 2021 Roster page at indyeleven.com.

Want to watch the Boys in Blue when they return to IUPUI’s Carroll Stadium in 2021? A limited number of Season Ticket Memberships are now available and can be secured starting at just $170 by visiting indyeleven.com/tickets or calling 317-685-1100.