Get to Know: Nicky Law 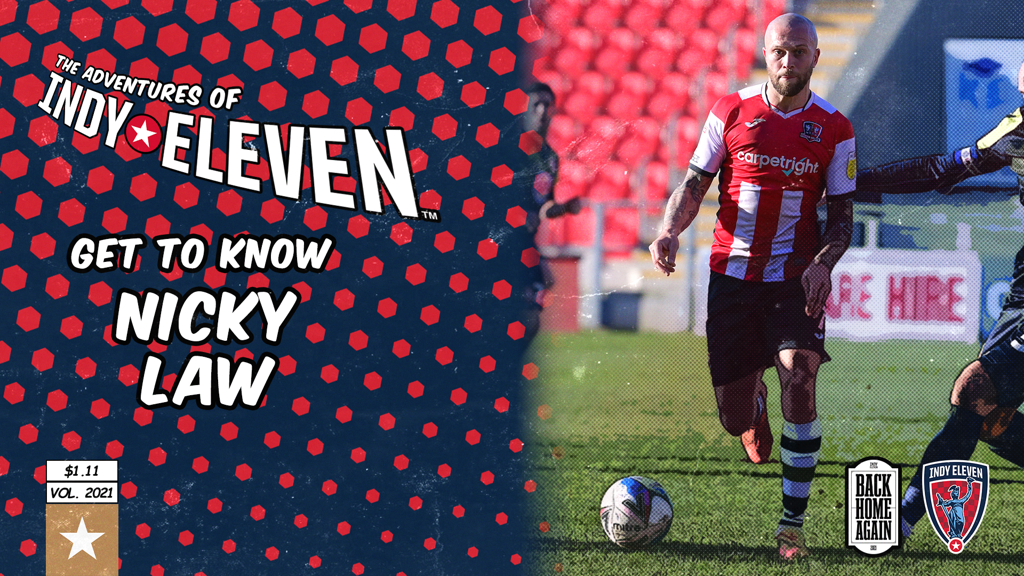 Want to know more about our latest signings? Throughout the offseason, we'll be asking all of our new Boys in Blue 11 questions to help you get to know them before we kick off the 2021 USL Championship season. Sit back and check out the Q&A below to get to know English football veteran Nicky Law.

NL: “There are a few that I probably shouldn’t be saying are my favorite snack [laugh]. I’ve got quite a sweet tooth – I like sweets.”

NL: “Ah, that’s tough. I like a comedy. I love ‘The Hangover’ series. If ‘The Hangover’ comes on – One, Two or Three – I have to watch it, I can’t turn it over. I like ‘Wedding Crashers’ as well, but if I had to choose one, I’d probably choose the first Hangover in Vegas. Like I said, if it’s on, I can’t turn it over. I must’ve watched it 15-20 times now. It gets me every time. I can’t stop laughing.”

NL: “Oh, Manchester United. The first-ever game my dad took me to was United away at [Nottingham] Forest – I was only five or six-years-old. Yeah, they won 4-nil and that was it, I’ve been United ever since then. I’ve had some good times, but as you know we’ve had five or six tough years now supporting Man United. It’s getting a little bit better now.”

NL: “There are loads to choose from Man United for myself, personally, but my favorite was always Eric Cantona. He was kind of the ‘main man’ when I first started going to watch and support [Manchester United]. Just loved everything about him obviously as a player, but he had that aura about him off the field as well."

"I’ve always said my idol was Eric Cantona, but as a midfield player I also really like Paul Scholes and Roy Keane. I remember when I was at Sheffield United that my first start was against Man United. It was my debut and I played against Paul Scholes. One of the biggest things that I look back on in my career now is playing against him. I have to admit that I didn’t get too close to him that day.”

NL: “Yeah, that’s tough. There are a few. I think an obvious one would be Eric Cantona, but a little bit more out there would be Tiger Woods. I love golf, I love American sport and he’s obviously right up there with everyone and anyone in the world. I’d imagine he has some stories to tell at the dinner table, if they’re PG enough [laughs]. I watched a great documentary recently about his comeback and everything he’s been through. I think that’d be a pretty cool meal.

NL: “I’m quite varied with the kind of music I like. I don’t know what it’s like over there, but over here there’s kind of a designated DJ who puts all the music on for everyone. It’s never been myself, really – I’ve always been one of the other lads."

"But for myself, I’m into R&B, hip-hop, things like that. I like Drake. I’m pretty versatile - I’ll listen to any genre, really. If I like the song I’ll listen to it before a game.”

NL: “I’ve always said flying. Or maybe…no, flying, really. To just go anywhere you want when you want. Do some stuff to some people I guess from high up if you don’t like them [laughs].”

NL: “My favorite TV show ever, they don’t really do anything now and I hope they do another in the future, is ‘Entourage’. Maybe integrate myself into that group. I love Johnny Drama and Ari Gold, they’re two of my favorite characters. If I could get a guest appearance on that show, that would be my favorite.”

NL: “I’m not sure. Maybe people at Indy Eleven don’t know this now, but everywhere I go people end up saying how laid back I am. I’m pretty chilled out. You wouldn’t know it at the moment, but I’m pretty chill and laid back, hopefully in a good way. My partner, Amy, doesn’t love it so much [laughs], but I hope most people grow to like it. I’m pretty easy going and I hope that’ll settle me in over there.”

NL: “When I was younger, I had a lot more hair than I have now. I used to have short, curly hair and people said I looked like Spencer Pratt from ‘The Hills’. One person since I shaved my hair off said to my mom that I looked like Jason Statham. I don’t know if that’s true or not, but someone did say that, and I think that’s about as far as it got with myself. I get a lot of bald jokes over here, but the Jason Statham one I was quite pleased with.”

NL: “First, I’m really excited to just get over there. It’s a completely new thing for me. It’s something I’ve thought that the longer my career went on I maybe missed the boat on something; I didn’t think I was going to get the chance to go abroad and try something new. So definitely that culture change, and it’s a country I love. I’ve gone on holiday there nearly every year since I’ve been going away, really.

“I think I’m excited to see how far we can go this year. Speaking with Martin [Rennie] and other people, we’re looking to go all the way this year and the squad we’re putting together certainly resembles that target. For myself, just to come a play for the team and hopefully go all the way, to meet the fans and play in front of the crowd. I’ve heard so much about the atmosphere that the Indy Eleven fans bring. I can’t wait to get out there and get going.”