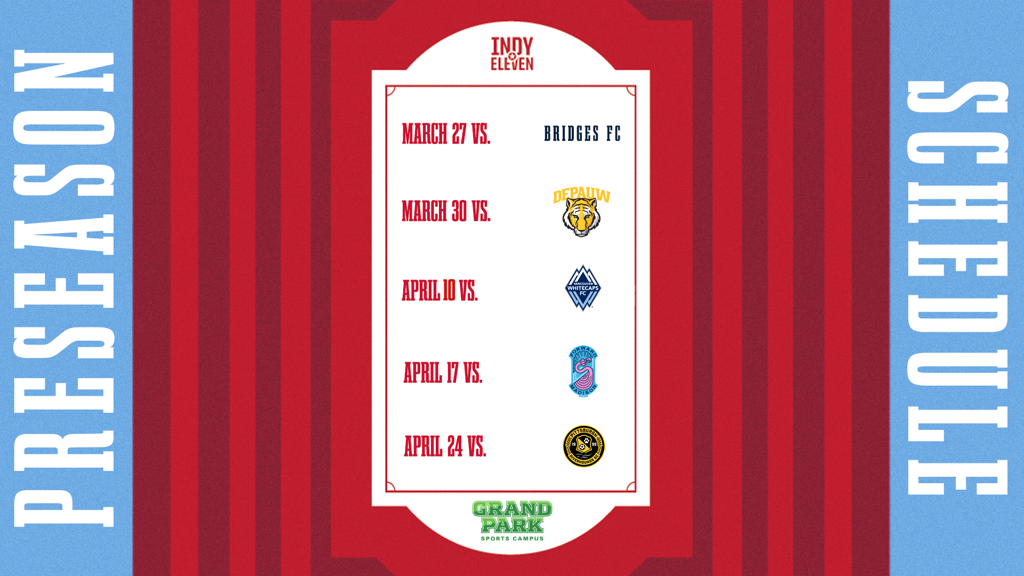 INDIANAPOLIS – Coming off the heels of Tuesday’s opening spring exhibition contest against Detroit City FC, Indy Eleven today announced an additional five friendlies that will round out the squad’s preseason calendar.

Most of Indy Eleven’s preseason exhibitions will be held at its training home at Grand Park in Westfield. However, the highlight of the slate will take place in Bridgeview, Ill., on Saturday, April 10, when it meets Major League Soccer side Vancouver Whitecaps FC at SeatGeek Stadium in a contest that could see Indiana’s Team face off against ex-Eleven goalkeeper Evan Newton.

All preseason games are subject to League approval and will require all opposing teams to adhere to the league’s COVID safety guidelines and return-to-play protocols.

Out of an abundance of caution for players and team staffs, all planned exhibition contests will be closed to the public and take place at Grand Park, unless otherwise noted. Dates and locations of the following matches are subject to change:

* match subject to sanctioning and approval from Canada Soccer and U.S. Soccer

Indy Eleven will provide live updates for fans during most contests via its @IndyElevenLive Twitter feed, presented by Central Indiana Honda Dealers.

“After enduring a much longer offseason than normal, this may be our club’s most anticipated preseason yet for everyone involved,” said Indy Eleven Head Coach Martin Rennie. “We are excited to integrate several important newcomers with a strong returning core. The way the exhibitions lay out, we believe we’ll be peaking when the regular season gets underway on May 1st.”

The preseason calendar will ramp up to Indy Eleven’s fourth season of play in the USL Championship, and eighth overall, which includes a move back to IUPUI’s Michael A. Carroll Stadium for all home regular season contests. The USL Championship announced on Tuesday that Indy Eleven will host its home opener on Saturday, May 8, against FC Tulsa, one week after its regular season debut on May 1 at Birmingham Legion FC.

Want to watch the Boys in Blue take on their USL Championship Central Division foes at “The Mike” throughout 2021 – including both home LIPAFC rivalry showdowns against Louisville City FC? A limited number of Season Ticket Memberships at Carroll Stadium remain available and can be secured starting at just $170 by visiting indyeleven.com/tickets or calling 317-685-1100.