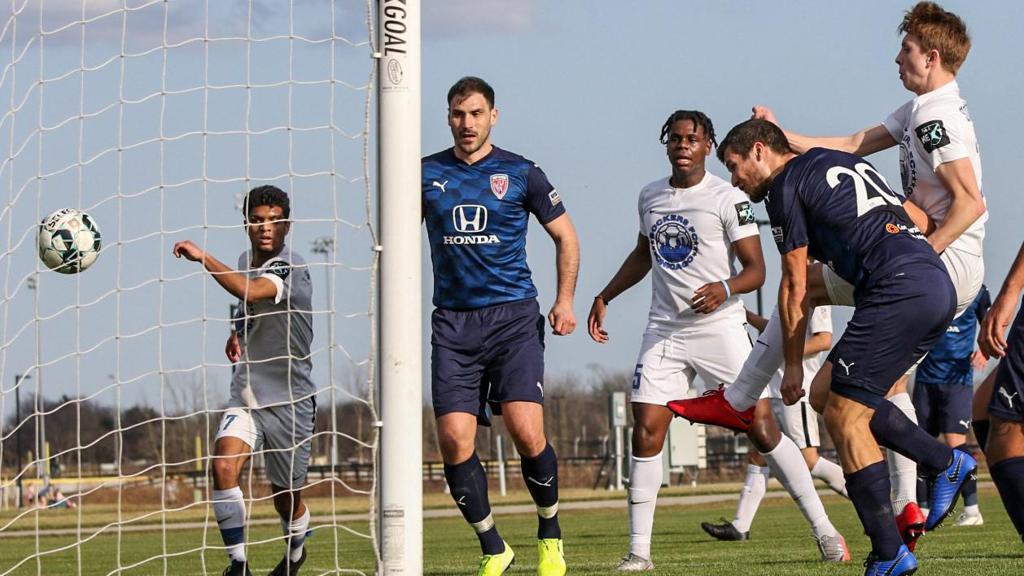 WESTFIELD, Ind. (Saturday, March 27, 2020) – Indy Eleven continued its preseason slate today at Grand Park by posting a 5-0 win over Illinois side Bridges FC. Ayoze continued his hot start to 2021 with a first half tally, defender Karl Ouimette added his first of the preseason in the second half, and a pair of guest players scored on either side of the interval, scores joined by a Bridges own goal to benefit the Boys in Blue.

Indy Eleven nearly went up top ten minutes in through forward Manuel Arteaga, who latched onto midfielder Rece Buckmaster’s right flank cross near the penalty area, only to see his shot spin off the base of the left post and over the endline.

That chance sparked an active five minutes that saw Indy bag the opening stanza’s two tallies in quick succession. The scoring binge began in the 12th minute, when Buckmaster forced a turnover and began a cycle of central passes towards the arc, where one of Indy’s pair of guest midfielders in the half bent a low shot inside the right post to put Indiana’s Team up 1-0.

At the quarter hour mark it was Ayoze picking up where he left off in Tuesday’s exhibition opener to double the advantage. The Bridges FC ‘keeper did well to keep out Indy’s initial shot on the chance, but the rebound fell to the onrushing Spanish midfielder, who made no mistake with a low, first-time effort from 12 yards to put Indy up 2-0. The goal was Ayoze’s third of the early spring season, adding to his pair of finishes and assist in 45 minutes of action earlier in the week against Detroit FC.

Ayoze would play a factor on the defensive end as well, sliding in at the edge of the area in the 37th minute to end Bridges’ best offensive foray of the half. Some half chances from Indy over the final half hour would mark the best of the rest of the action in the first half, which ended with Indiana’s Team maintaining its 2-0 lead.

Indy’s start to the second half unfolded the same way as the first, with a pair of goals in the quarter hour. Just minutes after forward Gordon Wild nearly saw a cross from the left endline knocked in for an own goal, a second cross by the ex-LA Galaxy performer in the 50th minute indeed deflected off a Bridges FC defender inside the six and into goal to push the Indy lead to 3-0.

In the 57th minute, midfielder Nicky Law’s cross off a short corner found defender Ouimette at the far post, and his deflected effort leaked its way through heavy traffic and into goal for the Eleven’s fourth of the evening.

The 69th minute saw Indy’s best finish from the run of play, beginning with a ball down the right sideline that Nick Moon tracked down and carried towards the endline. The midfielder’s laser of a cross found the head of Indy’s onrushing guest center forward, who headed home in stride from close range to move the score to 5-0.

Eleven netminder Jordan Farr didn’t have much to do on the day, but when his number was called in the 71st minute he came up big, making a kick save to repel a low shot destined for the right post. The remainder of the match played out uneventfully, with Indiana’s Team closing out the shutout in comfortable fashion.

Indy Eleven will continue its preseason slate this Tuesday, March 30, back at Grand Park against DePauw University, the third of six scheduled exhibition contests leading up to the squad’s USL Championship opener on May 1 at Birmingham Legion FC. A week later on May 8, Indiana’s Team will make its official return back to IUPUI’s Carroll Stadium by welcoming FC Tulsa to “The Mike” – a match you can secure seats at by becoming an Indy Eleven Season Ticket Member, details for which can be found at IndyEleven.com.