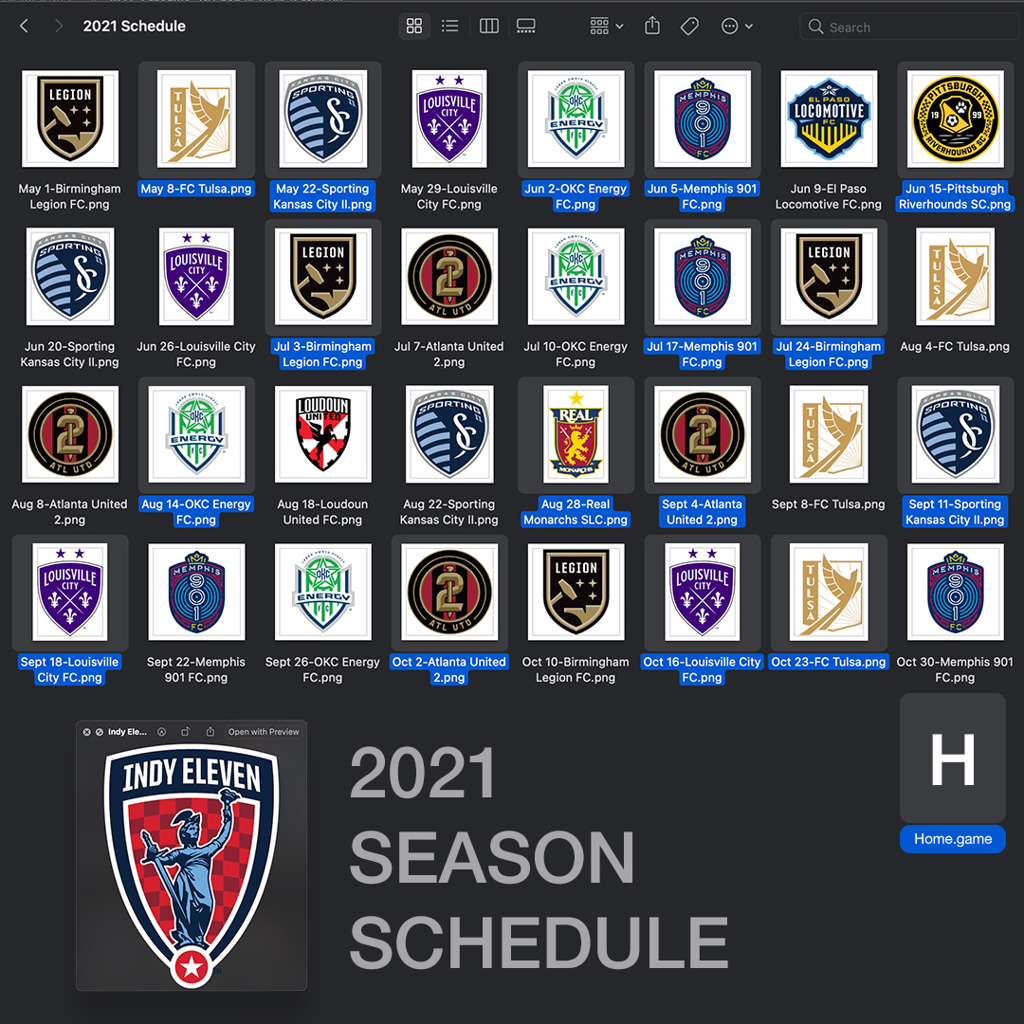 TAMPA/INDIANAPOLIS (Tuesday, March 30, 2021) – Indy Eleven has learned the full 32-game slate that will comprise the club’s 2021 USL Championship regular season schedule, released today as part of the league’s 496-match calendar for its 11th season of action.

The squad’s fourth season in the Championship – and eighth year of play overall – will include 16 home dates back at its original home of IUPUI Michael A. Carroll Stadium, including 14 match days on Saturdays. The full Indy Eleven 2021 schedule can be found at indyeleven.com/2021-schedule, and a one-page printable PDF version can be downloaded here.

As of now, the only way to secure your spot at Carroll Stadium in 2021 is with an Indy Eleven Season Ticket Membership, starting as low as $170 for a 17-game package. Availability is limited, so learn more and purchase a membership today by visiting indyeleven.com/tickets or calling 317-685-1100. Information on additional ticketing options for 2021 games at Carroll Stadium will be made available soon.

“We are excited that our move back to Carroll Stadium has provided fans with more Saturday home dates in 2021 than in any previous season,” said Indy Eleven President and Chief Executive Officer Greg Stremlaw. “The balance of home and away dates across the six-month calendar should set the organization up for success both on the field and in the stands, and we cannot wait to get the season underway in May.”

Most home games will kick off at 7:00 p.m. ET kickoff, and every contest at “The Mike” and four additional away matches will be broadcast locally live and over-the-air between Indy Eleven’s Official Broadcast Partners, WISH-TV and MyINDY-TV 23. Additional details regarding the local broadcast schedule will be released in the coming weeks.

As announced by the Championship last week, Indy Eleven will begin its regular season on Saturday, May 1, at Birmingham Legion FC, followed by its home opener one week later on Saturday, May 8, against FC Tulsa.

Indy Eleven’s second home date on Saturday, May 22, will mark the club’s third annual Racing Indy Night, celebrating Indiana’s racing culture and the 105th running of the Indianapolis 500 the following weekend. Updates on additional promotional nights at “The Mike” will be released in the coming weeks.

The two remaining inter-division contests also fall close on the calendar, a trip to Loudoun United FC on August 18 followed by a visit from 2019 USL Championship winner Real Monarchs SLC on August 28.

Indiana’s Team will renew acquaintances with archrival Louisville City FC on the wrong side of the Ohio River early in the season, their Memorial Day weekend showdown on Saturday, May 29, followed by another prime “away day” date at Lynn Family Stadium on Saturday, June 26. Indy Eleven will play host to its two Louisville-Indianapolis Proximity Association Football Contest showdowns in the latter third of the season on September 18 and October 16.

Visit USLChampionship.com for more storylines surrounding this year’s regular season calendar, and check out the league’s Schedule page for the month-by-month listing of games involving all 31 participant clubs.