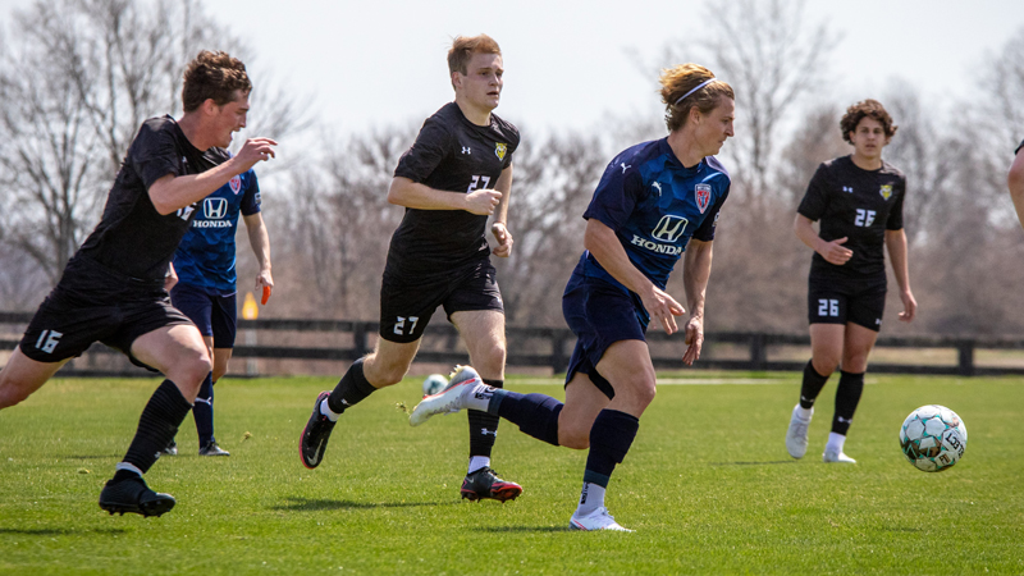 WESTFIELD, Ind. (Tuesday, March 30, 2020) – Indy Eleven raced out to an early lead and never looked back en route to posting a 6-0 exhibition win over NCAA opposition DePauw University this afternoon at Grand Park.

In its third win in as many outings to begin its spring training slate, Indy Eleven used two first half goals apiece from newcomer forwards Manuel Arteaga and Gordon Wild to set the pace. Midfielder Nicky Law contributed his first goal of the preseason in the second half, while one of Indy’s guest forwards in its preseason camp finished off the day’s scoring.

The Boys in Blue dominated possession to open the match, but they had only half chances to show for their efforts until the 12th minute. That’s when Wild took possession of a loose ball near the arc before carrying towards the penalty spot and firing low and left to move the scoreboard.

Less than two minutes later Indy Eleven doubled its early advantage, a chance generated when midfielder Gershon Koffie’s deft ball over the top found Ayoze in the left side of the Tigers area. The Spanish midfield maestro had the option to shoot but instead squared across the six to an unmarked Arteaga for a tap in finish, giving Indy a 2-0 lead and the Venezuelan striker his second goal of the preseason.

Ayoze went looking for a goal of his own in the 20th minute but missed just wide, and Arteaga was inches away from his second in the 25th minute, only to see his bending free kick from 25 yards bounce off the left post and the DePauw goalkeeper before going over the endline.

Arteaga indeed got his brace in the 28th minute, as he cleaned up the rebound of a saved shot off the foot of an Indy guest striker from deep within the six-yard box. A minute later it was Wild matching Arteaga, the German forward using the considerable southernly wind at his back to catch the Tigers’ netminder off his line from roughly 35 yards.

The changing of sides allowed DePauw to enjoy the benefits of the wind and a little more possession to begin the second half, but the one-way traffic the Eleven established in the first half ultimately returned. However, the first clear-cut chance of the second stanza for either side came in the 65th minute on a Tigers counterattack, a blast from 30 yards coming near Eleven goalkeeper Bobby Edwards’ right post but ultimately bouncing wide.

It was Law getting the first goal of the second half for Indiana’s Team in the 67th minute, the Englishman accepting a short layoff from a guest forward in the area before slotting low through traffic from 12 yards. A minute later it was Law returning the favor immediately, his cross finding the same guest player for a finish of his own to push the Eleven lead to 6-0.

Indy Eleven will focus on its collective self over the next two weeks before returning to exhibition action on Saturday, April 10, with a friendly against MLS side Vancouver Whitecaps FC - and former goalkeeper Evan Newton - at SeatGeek Stadium in Bridgeview, Ill. (closed to public).

Just over one month remains in the Indy Eleven preseason, which continues to build towards the club’s 2021 USL Championship opener at Birmingham Legion FC on May 1, followed a week later on Saturday, May 8, by its home opener against FC Tulsa. Currently, the only way to save a spot for the team’s return to IUPUI’s Michael A. Carroll Stadium is by becoming an Indy Eleven Season Ticket Member. Learn more about packages starting at only $170 for 17 games and secure one of the limited memberships remaining by calling 317-685-1100 or visiting the Tickets section of indyeleven.com.