From the Court to the Pitch

Thrill of March Madness Nostalgic for Buckmaster, Cochran and Farr 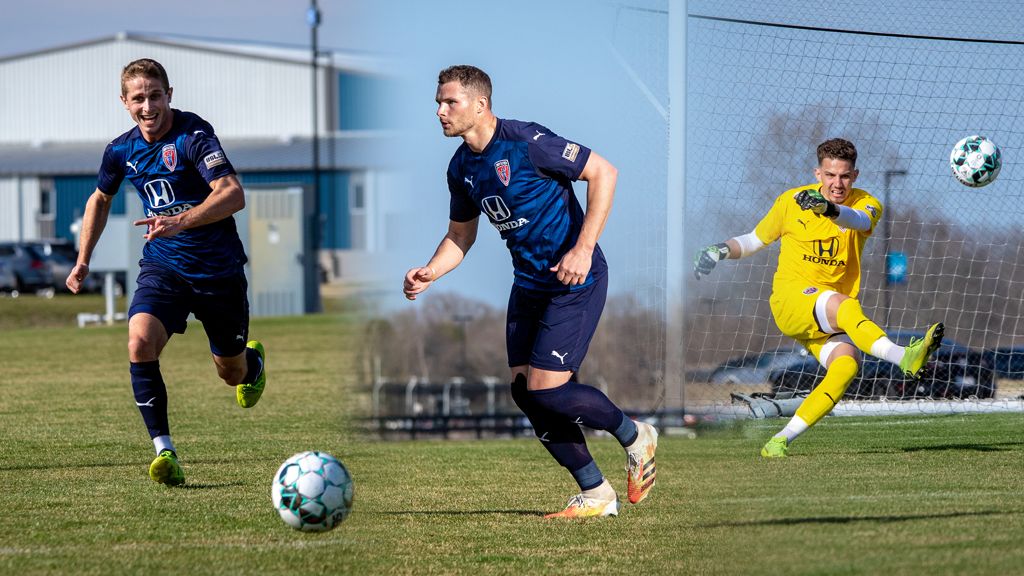 The lore of college basketball in Indiana is bigger than any game itself. Bobby Knight and the infamous chair toss of 1985, the longstanding Indiana University-Purdue University rivalry, the 1986 film Hoosiers – these moments and more are cemented in the ever-growing history of basketball in the state. That history has made an impact on the country, as well as many of the Boys in Blue.

A Hoosier born and raised, Auburn native and recently signed defender Rece Buckmaster was indoctrinated into the love of basketball at birth. The 24-year-old spent his youth dribbling down courts and represented his hometown teams, that is, until high school. Buckmaster had a difficult decision to make: stick with Hoosier traditions or pursue his passion for soccer. In the end, soccer won out.

Choosing soccer over basketball was an important moment for Buckmaster. He found early success as went on to win two high school state championships with his Canterberry teammates, as well as picking up minutes with Westfield-based Indiana Fire Academy before being recruited for Todd Yeagley’s IU Men’s Soccer squad. Buckmaster credits much of that success to the skills he picked up during his days on the court.

“I feel like I read [soccer] a lot better because I played basketball,” Buckmaster said.

During his time at IU, Buckmaster fondly can recall playing basketball as a way to bond with his soccer teammates, often sneaking into Assembly Hall after class to play a pick-up game. It was nostalgic.

Though Buckmaster now spends his days dribbling on a pitch, shooting hoops continues to serve as a way to spend quality time with his family and reflect on his roots.

“Growing up, it was always basketball and soccer for me. My dad played basketball in high school too and went to state a couple times. I loved playing basketball and I just fell in love with the sport. I still play to this day.”

Though he was born a couple of states over, defender A.J. Cochran still feels a bit of Hoosier Hysteria once basketball takes over the headlines. The St. Louis native watched his uncle Steve Cochran, who is now the Director of Player Personnel for the University of Illinois Women's Basketball team, coach college basketball for most of his life. As an adolescent, he enjoyed traveling with his family to packed stadiums to watch the teams his uncle took to victory.

“I remember it pretty well,” Cochran said. “It was always a blast to go to those games and see my uncle and get to spend time with my family.”

It can be difficult for a seven-year-old to make it through four quarters, so Cochran found entertainment in visiting the concession stands or shooting hoops with his cousins in the auxiliary gym.

Cochran’s love of basketball has not faded, but much like Buckmaster, his passion for soccer has gotten him to where he is today.

“They’re very, very similar for me, soccer and basketball,” Cochran said. “I found enjoyment in the defensive side of the game. For some reason, basketball was what I really got excited for, going to practice, at the time, even more than soccer.”

Unlike his teammates, goalkeeper Jordan Farr made every effort to keep his love for basketball alight all the way throughout his high school career.

“Senior year came around and all of my closest friends were playing so I said, ‘what the heck, let’s go for it.’ Ended up playing all of about three minutes total throughout the whole season and almost won a state championship riding the pine,” Farr recalled fondly.

Farr still plays often during his offseason in what he dubbed “barn ball”: 3-on-3 half-court basketball in an old barn in his hometown of Salem, Ore.

When March Madness was at its peak, Farr usually remembers watching the 2016 Villanova vs. North Carolina NCAA National Championship game. That game in particular piqued his interest in the tournament. He may have disrupted his Corban University classmates during the night class he was attending while watching it, but his passion for the game could not be stopped.

“As history goes, [Kris] Jenkins from Nova pulls up and nails a game-winning three [-point shot]. All my buddies in the back row of class go ballistic in the most ‘quiet and respectful way’. We got a firm talking to from the advanced-in-years professor and finished the class 15 minutes early,” Farr said. “I left that night class ready to run through a brick wall, heart beating frantically from excitement. Big March Madness guy ever since!”

With March Madness now over and the focus around the Circle City shifting back to local sports,  Buckmaster, Cochran and Farr will continue to look back at the lessons they learned from basketball as they prepare for the start of the 2021 USL Championship season.

Want to watch Indiana’s Team throughout the 2021 season at Carroll Stadium, beginning May 8 vs. FC Tulsa? A limited number of Season Ticket Memberships remain available and can be secured starting at just $170 by visiting indyeleven.com/tickets or calling 317-685-1100.