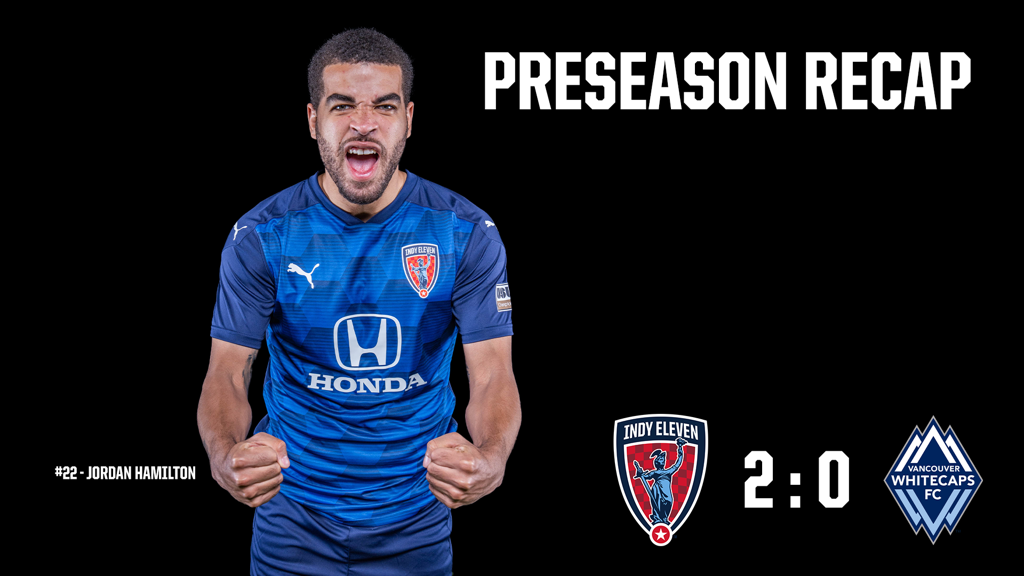 BRIDGEVIEW, Ill. – Indy Eleven used a pair of goals by forward Jordan Hamilton and a number of key saves from goalkeeper Jordan Farr to post a 2-0 win over MLS side Vancouver Whitecaps FC. The 65-minute affair was contested at SeatGeek Stadium in Bridgeview, Ill.

The neutral site affair was a game with familiar faces to both fan bases. Indy Elven Head Coach Martin Rennie was the sideline boss of the British Columbian club throughout 2011-2013, when the first Canadian team in MLS history reached the Playoffs while also winning a Cascadia Cup. The stay of new Eleven midfielder Gershon Koffie in Vancouver was twice as long, the Ghanian’s tenure starting in 2012 with two seasons under Rennie’s watch and lasting into the 2016 campaign.

On the opposite bench, longtime NASL and USL Championship coach Marc Dos Santos brought goalkeeper Evan Newton into the MLS ranks via transfer in late January, this after seeing up close what the number one between the posts for Indiana’s Team the last two seasons could do en route to becoming the Championship’s career leader in shutouts and saves.

In the 4th minute, it was a beautiful turn by Hamilton that turned the scoreboard first.  Midfielder Nick Moon began the play with a shoulder tackle before playing a nifty 1-2 with the newest member of the Eleven, Cammy Smith, just right of the area. Moon's first-time cross was accepted by Hamilton as he spun centrally, freeing a half-yard of space. The Scarborough, Ontario-native left nothing to chance from just eight yards out, firing hard to beat Newton and put Indy up in the early going.

The Eleven continued to push the pace, the ninth minute seeing Smith put a low shot on frame that took a fortunate deflection right into the arms of Newton. Two minutes later the ex-Eleven ‘keeper was at it again, making a big stop on Koffie, who found a recycled corner from Ayoze land at his feet in the heart of the penalty area.

The tide of the match turned in Vancouver’s favor for the next ten minutes, Farr making a routine save in the 12th minute and a much larger one a minute later, when he went low and looked big to stop Theo Bair’s close-range effort. The resulting corner provided more danger for Whitecaps FC, but defender Gianfranco Facchineri headed over from 10 yards.

The 17th minute saw Farr make back-to-back saves, the first on a nice diving effort to his left to parry diagonally and away from dangerous traffic. The next minute saw him cut down a chance on the left endline, the Oregonian sliding in sternly – but fairly – to tackle away.

Indy took back the wheel with two big chances down the right flank around the 23rd minute, both involving Moon. The first again saw Newton forced into a save, this time by the Scotsman Smith, whose shot marked the final big chance of the first 30 minutes.

The Eleven earned the first chance of the second half with a jailbreak out of tight space that turned a Vancouver set piece chance into a 2-v-2 counter with Smith on the ball. His chip for Hamilton’s central run was just a hair heavy and gathered by Newton.

However, Hamilton’s second was inevitable, and he bagged his brace in the 40th on a play that began with Moon fighting hard to earn a throw-in on the right sideline. His snappy restart caught Vancouver off guard, allowing midfielder Aboubacar Sissoko to clip a short ball for his fellow Canadian to finish inside the right post from about 15 yards.

Vancouver nearly got one back in the 43rd minute as Damiano Pecile put Kamron Habibullah into the left channel on a counter, but after looking to the far post he drug his near effort just outside the woodwork. On the 50th minute Smith got Moon involved again on the right side, but his cross to the six for Indy’s trialist forward was nodded out for a corner on a pivotal intervention by a Vancouver defender.

The final quarter-hour until was relatively quiet until the game’s final attack in the 65th minute, when Sissoko’s chip unlocked a trio of defenders for Smith, whose shot from 25 yards whistled just high.

Only three weeks remain in the Indy Eleven preseason, which winds down with exhibitions the next two Saturdays against Forward Madison FC of USL League One and fellow Championship side Pittsburgh Riverhounds SC.

Those friendlies will help Indy Eleven build towards the club’s 2021 USL Championship opener at Birmingham Legion FC on May 1, followed a week later on Saturday, May 8, by its home opener against FC Tulsa. Currently, the only way to save a spot for the team’s return to IUPUI’s Michael A. Carroll Stadium is by becoming an Indy Eleven Season Ticket Member. Learn more out packages starting at only $170 for 17 games and secure one of the limited memberships remaining by calling 317-685-1100 or visiting the Tickets section of indyeleven.com.