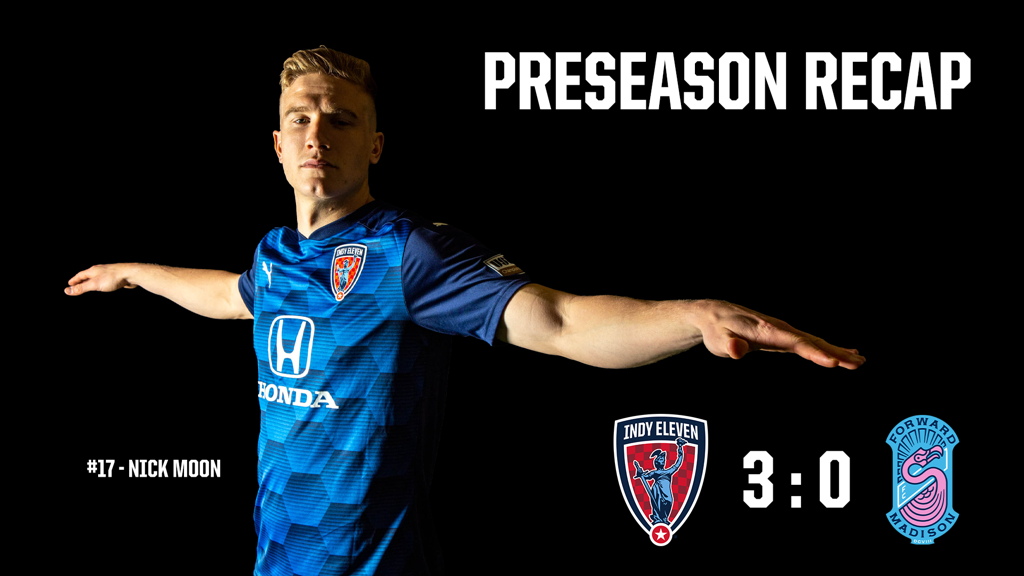 INDIANAPOLIS – Indy Eleven used second-half goals from forwards Nick Moon, Manuel Arteaga, and Jordan Hamilton to run away to a 3-0 victory over USL League One side Forward Madison FC in preseason exhibition action this afternoon at IUPUI’s Michael A. Carroll Stadium.

Arteaga signaled his attacking intent not too long after the opening whistle, his heavy effort from 25 yards taking a deflection before testing Madison goalkeeper Phil Breno at his left post. While the game began with both squads able to move the ball effectively into the final third, quality chances did not result. The next truly dangerous look came again from Arteaga in the 35th minute, the Venezuelan fighting through two defenders near the spot to take a solid poke that met the chest on an onrushing Breno well out of his goal.

Forward Madison would work into some chances as the half progressed, most notably in the 42nd minute when Mike Vang cut right across the top of the area and fired a low effort that forced Eleven netminder Jordan Farr into his first save of the day. A minute later, Indy midfielder Ayoze worked well with Hamilton to set up the Canadian striker from 20 yards out, but his effort went high, and the rest of the half played out to remain scoreless at the break.

The second half would be a different story, with much of that due to the insertion of Moon on the right side of Indy’s attacking line. The third-year pro moved the scoreboard just five minutes into the stanza, when he got on the end of Nicky Law’s flick off a corner kick, Moon poking home from the edge of the six to move Indiana’s Team ahead.

It was Arteaga finally breaking through in the 65th minute, set up by a well-driven cross from the left flank by the newest member of the Boys in Blue, halftime substitute winger Patrick Seagrist. Arteaga accepted the ball with his chest before touching past a defender and finishing low and inside the far left post to double the Indy advantage.

Moon did the heavy lifting five minutes later to finish off the scoring, his lengthy run to the right endline ending with a cutback ball that made it through Forward Madison traffic and deep inside the six. A couple of Boys in Blue were near, but it was Hamilton getting it to the finish line, heading the ball – and himself – into goal for a 3-0 advantage.

Moon would have the last best chance of the match in the 82nd minute, turning and firing a shot from 15 yards out that forced Breno into one more low save. The Indy striker was also at the root of an ejection a minute later, his suffering of a foul as he rushed towards goal resulting in a red card shown to Forward trialist Noah Robinson, although the visitors were allowed to finish the friendly with 11 men on the pitch.

Indy Eleven will finish off its preseason one week from today back at Carroll Stadium in another closed-door friendly, this time against fellow USL Championship side Pittsburgh Riverhounds SC. Fans can follow the action via the team’s @IndyElevenLive Twitter feed, presented by Central Indiana Honda Dealers.

That contest will end the build up to the squad’s USL Championship opener, taking place Saturday, May 1, at Birmingham Legion FC (7:30 p.m. kickoff, live on ESPN+). A week later on May 8, Indiana’s Team will make its official return back to “The Mike” by welcoming FC Tulsa – a 7:00 p.m. kickoff fans can secure seats for by becoming an Indy Eleven Season Ticket Member, details for which can be found at IndyEleven.com.