Early Second Half Goals Cancel Out in Eleven’s Preseason Finale 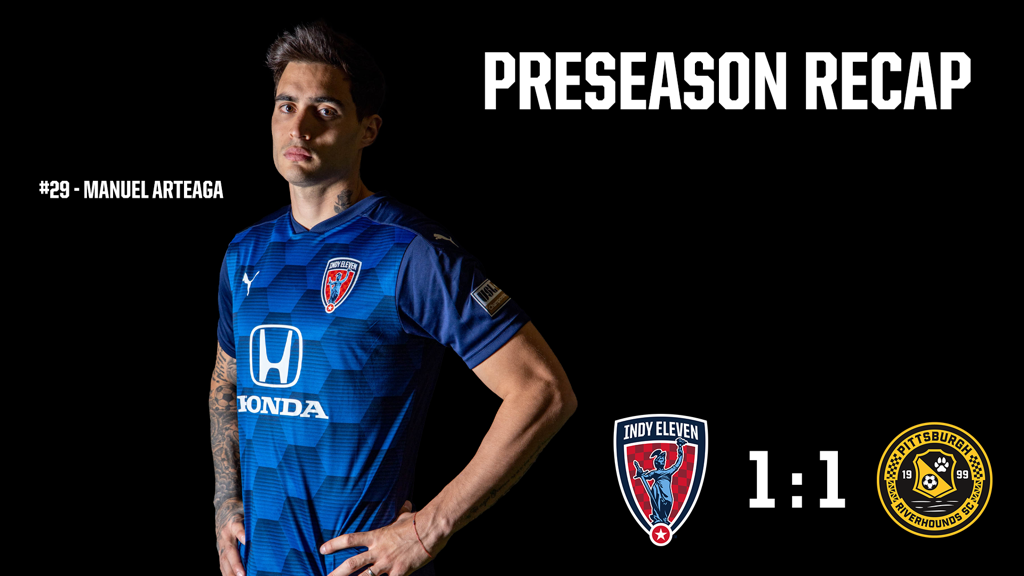 Indy Eleven would take the lead early in the second half through Venezuelan forward Manuel Arteaga, only to see Riverhounds striker Russell Cicerone even up minutes later. The closed-door scrimmage marked the Eleven’s final exhibition of the 2021 preseason.

The games will start to count next Saturday, May 1, when Indy Eleven will face Birmingham Legion FC in both sides’ USL Championship regular season opener (7:30 p.m. ET kickoff, live on ESPN+). A week later on May 8, Indiana’s Team will make its official return back at “The Mike” by welcoming FC Tulsa – a 7:00 p.m. kickoff fans can secure seats for by becoming an Indy Eleven Season Ticket Member, details for which can be found at IndyEleven.com. Fans that cannot make it to Carroll Stadium for the home opener can follow along live on MyINDY-TV 23, ESPN+, and Exitos Radio 94.3 FM/exitos943.com (Spanish audio broadcast).

The first half was a rugged affair, with Pittsburgh coming out on the front foot when it came to possession and chances in the first 20 minutes. Cicerone had two chances to put the visitors up around the 7th minute, but Indy Eleven goalkeeper Jordan Farr did well to beat the onrushing striker to a low cross on the first chance, while Cicerone nodded a far post header high on an ensuing corner kick a minute later. Farr was also on the spot in the 18th minute, alertly coming off his line to beat Alex Dixon to a dangerous through ball in the top of the Indy penalty area.

It was Arteaga helping to create the first quality chance for Indy with a stern shoulder challenge to win the ball and a wide distribution to midfielder Rece Buckmaster. The IU product’s dangerous cross met the head of fellow winger Patrick Seagrist at the far-left post, but from his near angle all he could do was center for an Eleven runner that couldn’t arrive in time.

In first half stoppage time it was forward Jordan Hamilton looking to create for himself after winning a ball in the midfield, but his lengthy run ended with a high attempt from 25 yards, which itself ended the first half.

If the first half was timid, the second started off torrid, with Arteaga putting the Boys in Blue up less than three minutes in. It was a hustle play by halftime substitute Nick Moon that kept the play alive on the right endline, where he played short into the area for midfielder Cammy Smith. The Scotsman’s crafty flick on found Arteaga 1-v-1 against ‘Hounds goalkeeper Jake Leeker, and the Venezuelan left nothing to chance by slamming home from five yards out to put Indy up 1-0 in the 48th minute.

The lead would be short lived, however, as the Riverhounds leveled in the 51st minute through Cicerone, who got on the end of Alex Dixon’s short cross from their right endline and fired a first-touch finish from nine yards to level quickly for the visitors.

The 57th minute saw the Eleven earn a penalty kick through Hamilton, who was taken down at the top of the area after he tried to split two defenders to reach a well-played give-and-go return from Smith. While Hamilton would take the kick himself, Leeker rose to the challenge, diving low and left to stop the initial penalty and beating Hamilton to the rebound to end the chance for Indy.

The final half hour would see plenty of subs for both sides but few in the way of quality chances. Indiana’s Team earned a couple of dangerous free kick opportunities in the 30-yard range down the stretch, the most promising coming on Arteaga’s direct blast in the 81st minute that was nodded away by a defender deep inside the area. Moon earned one last quality look in the 88th minute by winning a tackle 25 yards out and finding midfielder Nicky Law open in space, but the Englishman’s shot from distance sailed high.