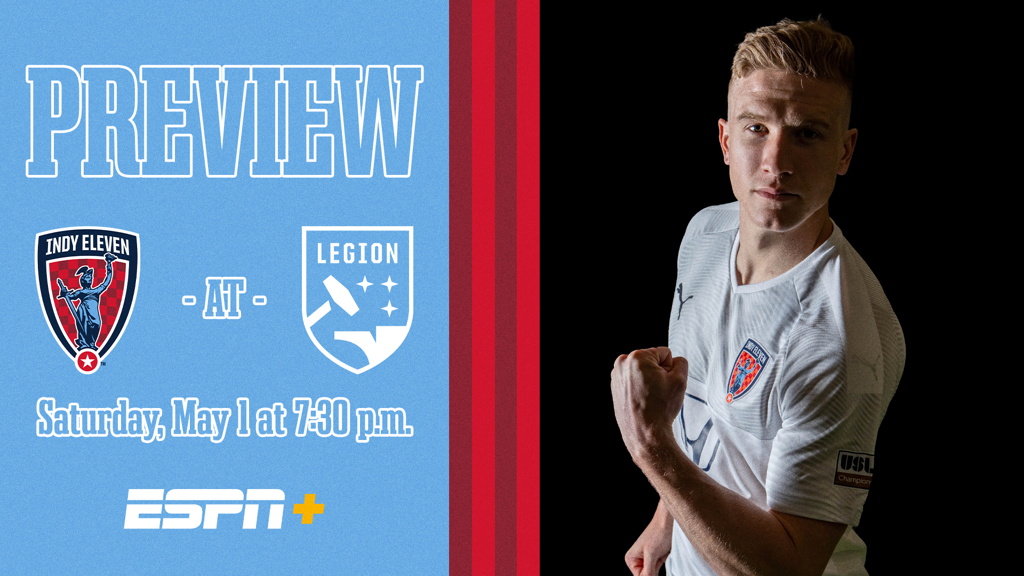 The dawn of Indy Eleven’s eighth season will break this weekend in the heart of Alabama, where Indiana’s Team will take on Birmingham Legion FC as both teams begin their “Central Conference Era” at BBVA Field. The first of 32 USL Championship regular season affairs will break the chain of 210 days without a game in official competition, ending the longest hiatus between games in Indy Eleven’s growing history.

With that much time off, it is needless to say that Head Coach Martin Rennie is not the only one itching to see what the new-look Eleven have in store – though he’ll certainly be the most interested observer. The Scottish skipper led a roster overhaul that features 16 new Boys in Blue added to 10 returnees – with only six of those familiar faces seeing minutes in Championship action for Indy in 2020.

Those that return will be looking to quickly expunge the memories of last year’s grueling finish, the squad’s 7W-7L-2D record and 25 points ultimately falling just short of qualifying for one of two postseason bids from a Group E that arguably was the Championship’s “Group of Death” in 2020. Meanwhile, Birmingham didn’t exactly cover themselves in glory either, but their earlier body of work stood tall enough to overcome a 1W-4L-1D mark down the stretch run of the regular season. The Hammers’ first USL Championship Playoff berth did not last long, however, ending their first time out with a 4-2 loss in the Eastern Conference Quarterfinals to eventual conference victor Tampa Bay Rowdies.

Indy Eleven’s 2021 preseason left plenty of room for optimism, with an impressive 2-0 showing against a young outfit from MLS side Vancouver Whitecaps FC, a thorough 3-0 trouncing of USL League One side Forward Madison FC, and a 1-1 draw against fellow Championship foe Pittsburgh Riverhounds SC to close things out last weekend. The preseason featured plenty of goals from the new forward tandem of MLS veteran Jordan Hamilton and Venezuelan newcomer Manuel Arteaga, both of whom will look to make up for the departure of two-time defending Eleven scoring leader Tyler Pasher (currently showing out for Houston Dynamo FC after his offseason transfer to the MLS side).

The club’s “fountain of youth” – midfielder and newly-named captain Ayoze – also showed he has plenty left in the tank during his preseason performances, while third-year pro Nick Moon also provided plenty of spark mostly from the right flank.

In goal, it looks as if fourth year Eleven performer Jordan Farr will earn the number one spot between the posts over newcomer Bobby Edwards. In front of him, there will be plenty of competition for spots on Rennie’s three-man backline, a corps stacked with talent that includes two-time All-USL performer Neveal Hackshaw, vice-captain Karl Ouimette, another one-time All-USL honoree in A.J. Cochran, 15-year Austrian leagues veteran Nedeljko Malic and former Butler University standout Jared Timmer.

Meanwhile, Birmingham enters 2021 having added serious fuel to its attacking fire in the person of defending USL Championship Golden Boot winner Junior Flemmings (15 goals in 2020), the Jamaican set to play alongside two of the league’s other top scorers from 2020 in forward and fellow countryman Neco Brett (9 goals, T-9th) and Brazilian playmaker Bruno Lapa (8 goals, T-11th).

Alex Crognale, who enjoyed a cup of coffee with Indy Eleven in 2019 on loan from Columbus Crew, was Birmingham’s Defender of the Year in his first season with the squad in 2020 and will look to anchor the Legion backline that added ex-STLFC standout Phanuel Kavita in the offseason. Rennie will see another familiar face in Daigo Kobiyashi, the 38-year-old midfield stalwart now in his third season in Birmingham; he was under Rennie’s charge with Vancouver Whitecaps FC in 2013, the first of the Japanese legend’s five MLS campaigns. Behind everyone will be Matt Van Oekel, the 34-year-old goalkeeper who will be familiar to Eleven fans – although he could be pressed for time this season by Valparaiso native Trevor Spangenberg.

With both of 2020’s originally scheduled meetings cancelled after the COVID 19 pandemic caused an early season re-shuffle into groups, the series history consists of their 2019 contests, both won by the home sides.

Indy Eleven impressed in the first meeting on June 26, 2019, a comprehensive 3-0 win at Lucas Oil Stadium that featured a five-save shutout by Jordan Farr and tallies by Tyler Pasher (7’) and Thomas Enevoldsen (90+1’) bookending Mathieu Laurent’s own goal (44’). Legion FC got the better of Indy in the return match at BBVA Field on Sept. 20, Brian Wright’s 39th minute goal proving enough in a 1-0 triumph over an Eleven squad that finished with 10 men after Drew Conner’s 53rd minute red card.

Saturday’s game marks the first of four 2021 matchups, the series continuing with a pair of meetings in the Circle City three weeks apart on July 3 and July 24 and concluding back in Alabama on Oct. 10.

Even with all of the shiny new toys to play with in regards to the Eleven’s bevy of offseason additions, Moon’s preseason showings earns him the pole position in this space. The former All-USL League One performer showed flashes of his potential at forward during his first campaign with the Eleven in 2020, but early returns from 2021 seem to indicate he’ll provide more danger facilitating from out wide, be it from the midfield or top-line positions.

When the competition stiffened over the last three spring exhibitions, the 24-year-old had a hand in five of the squad’s six goals (a goal, two assists and two hustle players resulting in “hockey assists”), helping to make the case for his inclusion in Rennie’s first XI selection this weekend. With Pasher’s production needing to be replaced, don’t be surprised to see Moon fill his fair share of that void alongside Hamilton, Arteaga, and Gordon Wild.

While Matt Van Oekel was the original option because, well, it seems like we’ve been playing against him for forever, the more we looked into it the more the spotlight shone on Lapa. The 23-year-old burst onto the Championship scene during his rookie campaign in 2020, starting all 17 matches for Birmingham after a decorated collegiate career at Wake Forest University.

Including Legion FC’s playoff match, he went on to lead the team in chances created (35) and in shots (26), tie for the team lead in assists (5), and finish second in goals (8). The midfielder finished the season as one of only two players in the Championship to tally at least eight goals and five assists – the other being reigning league MVP, Solomon Asante of Phoenix Rising FC. For all the firepower the Jamaicans Neco Brett and Junior Flemmings bring to the front line, Lapa deserves at least as much attention – and you can bet he’ll get plenty of it from the Eleven midfield collective in an attempt to cut off his dangerous service.