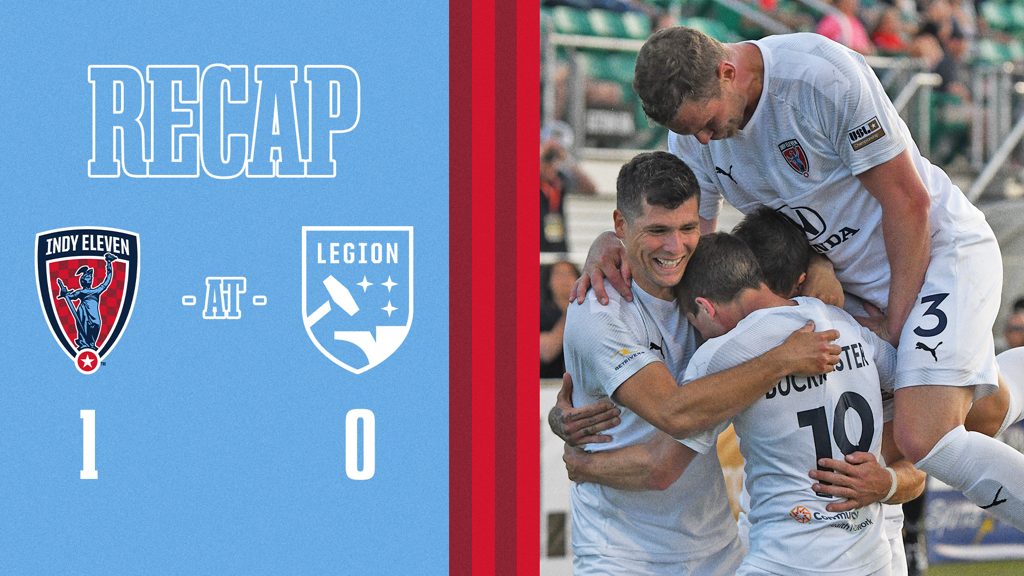 BIRMINGHAM (Saturday, May 1, 2021) – Indy Eleven started its 2021 USL Championship season on a high note with a 1-0 win at Birmingham Legion FC after a 28th minute poacher’s goal from forward Manuel Arteaga in his team debut. The result raised Indy’s record against the Legion all-time to 2W-1L-0D, with tonight’s season opener marking the first competition between the two teams since Sept. 20, 2019 at BBVA Field.

The game’s lone goal came after one of many driving runs from recently acquired defender Patrick Seagrist’s cross to forward Cammy Smith. The Scotsman’s shot forced a point-blank save from Birmingham ‘keeper – and long-time Indy opponent – Matt Van Oekel, but the rebound was followed up and tapped in by the Venezuelan from near the penalty spot.

“It feels great, it’s been seven months since we’ve played a game so it’s really nice to get the win. There were quite a few good performances from all of the players and everyone had to work hard and fight hard,” said Indy Eleven Head Coach Martin Rennie. “It was a really hard first game because Birmingham Legion (FC) are a really tough team and it was their home opener. It was quite a difficult field as well, but we got a great result.”

The game’s first chance came in the 14th minute when Legion forward J.J. Williams was able to latch upon a loose ball after a short clearance fell near the top of Indy Eleven’s box, but he beamed his shot wide into the side netting.

Legion FC’s Alex Crognale was on the delivering end of the home side’s next chance four minutes later, a corner kick from Bruno Lapa rebounding off the former Eleven defender’s head and towards ‘keeper Jordan Farr, who gathered the ball without issue.

Though Legion was heavy-handed on the attack, it was Indy that managed to break the stalemate. In his USL Championship debut, it was the Inter Miami CF loanee Seagrist that unlocked the defense on the play, his well-weighted ball putting Nicky Law to the endline. Law’s centering pass found Smith inside the BHM penalty area, and while his initial shot was parried away into a crowd of players, Arteaga broke through the pack to find the scoresheet on his debut off the bounce.

Farr was called into action again in the 36th minute after Nico Brett volleyed a shot from outside of the box, but the Salem, Ore.-native halted the last dangerous attempt of the first stanza. Though Birmingham led possession 54- 46, it was Indiana’s Team that led heading into the break.

High tensions led to the start of scrappy affairs at the beginning of the second half began, with Birmingham’s Anderson Asiedu earning the first yellow card of the evening in the 61st minute.

Indy’s defense was on the back foot for most of the second half, and while the Legion FC sent in multiple crosses all were handled well by the Eleven’s back line. During one late barrage of crosses Williams made contact with Indy captain Karl Ouimette inside the area, and upon not drawing a point to the spot his lash-out reaction against the Canadian defender resulted in a straight red card for the forward in the 87th minute. The accumulation of events led to the fourth official signaling for five minutes of stoppage time, but neither side saw any additional looks at goal as Indy claimed all three points at the sound of the final whistle.

“They all did well. It was a good team performance defensively; we had a good shape. A.J. [Cochran] won a lot of good headers, and I also think that helps a lot if a team is playing long balls. They had J.J. Williams who is a threat. but A.J. won those battles and that helps us,” explained Rennie. “The players from the front worked very hard to that shut down the opportunities and in the end that was a good clean sheet. Not too many chances given up, but I thought Jordan Farr did well with all the things he had to do including kicking on a difficult surface.”

Indy Eleven will look to start an early winning streak in its home opener at Michael A. Carroll Stadium against FC Tulsa, the team returning to its original home next Saturday, May 8. For the time being, the only way for fans to secure tickets to the 7:00 p.m. kickoff is by becoming an Indy Eleven Season Ticket Member, details for which can be found at IndyEleven.com. Fans that cannot make it to Carroll Stadium for the home opener can follow along live on MyINDY-TV 23, ESPN+, and Exitos Radio 94.3 FM/exitos943.com (Spanish audio broadcast).