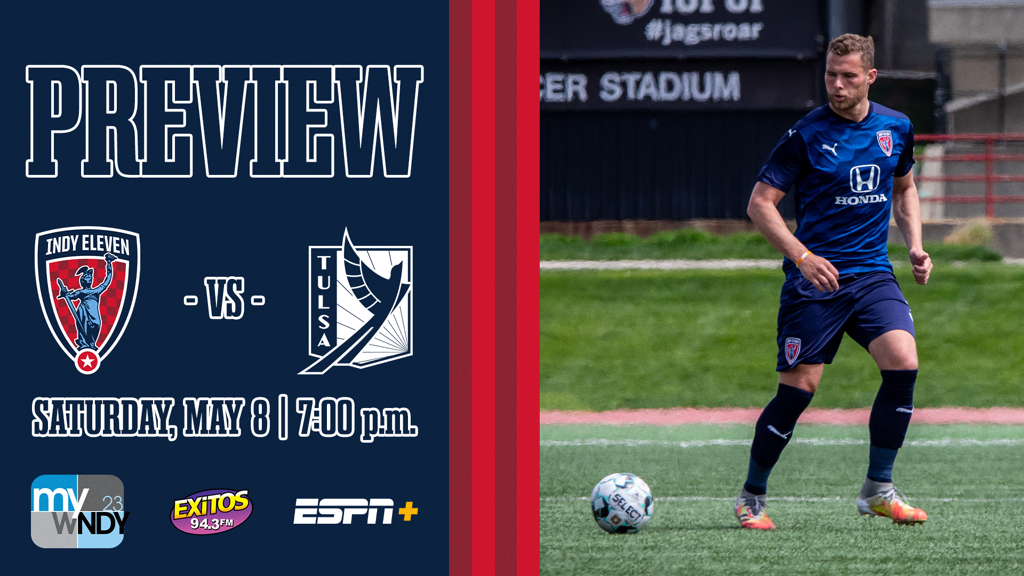 It’s “Back Home Again” for Indy Eleven this Saturday, when the Boys in Blue make their official return to IUPUI Michael A. Carroll Stadium for their 2021 USL Championship home opener. FC Tulsa will serve as the opposition for Indy Eleven’s first regular season game back at “The Mike” since the end of the 2017 season – although Indiana’s Team is not foreign to the field during its USL Championship era, having played a pair of playoff games at the venue during its run to the 2019 USL Championship Playoffs Eastern Conference Final.

Saturday’s affair appears to be a good early test, as FC Tulsa is the lone of the four Championship squads with two games under their belt to have taken the full six points from them, courtesy of wins over regional rivals and Central Division foes OKC Energy FC (3-1 W on April 24) and Sporting Kansas City II (2-0 W on May 1). Indy Eleven could do the same with a victory on Saturday after starting off on the right foot in last weekend’s gritty (in more ways than one) 1-0 triumph at Birmingham Legion FC.

For Indy Eleven, it was defense carrying the day, with fourth-year goalkeeper Jordan Farr beginning his tenure as the Eleven’s #1 between the posts (literally and figuratively) with a three-save shutout. In front of him, newcomer A.J. Cochran (more on him below) had a Team-of-the-Week “honorable mention” caliber performance in his debut in the center of Head Coach Martin Rennie’s traditional three-man backline, but it was truly a team performance from back to front on the defensive side of the ball, a collective effort the Scottish sideline boss appreciated after the opening win.

That defense will get put to the test Saturday evening, with Tulsa putting up five goals and 11 shots on target across its opening two games. The Tulsa attacking portfolio is diversified – forward Dario Suarez has hit home in each contest and Joaquin Rivas bagged a brace in the opener, while Jorge Corrales has a couple of assists and Rodrigo da Costa (more below) has registered a goal and assist.

While it is too early to tag this a “fight for Central Division supremacy,” it will serve as a fair measuring stick for a pair of clubs with high expectations in 2021, and perhaps a sign of what will be more powerful as this season goes on – the “unstoppable force” of Tulsa’s offense or the “immoveable object” that is the Indy defense.

With FC Tulsa – born as the USL Championship’s modern edition of the Tulsa Roughnecks from 2015-19 – residing in the Western Conference until the 2021 season, Saturday will mark the first meeting of the two squads. Since there’s no history between the two sides, we’ll share some fun facts instead ...

So, how much can be gleamed from 90 minutes contested in a glorified sand trap, you ask? Well, that depends ... but we think we can take away more from the defensive side of last weekend’s opening win in Birmingham, which is why we’ll pick out Cochran, the lone newcomer on the three-man backline deployed by Martin Rennie in the victory. The 2019 All-USL Second Team defender commanded the final third, tying Gershon Koffie for the team lead with four tackles and leading the way solo by winning nine of the 10 duels entered (including all five aerial challenges) and collecting seven clearances and five interceptions. Rennie pointed out the importance of Cochran neutralizing the physical presence of JJ Williams, but the St. Louis native will have his hands full in a different fashion this weekend with a shiftier collection of front line talent that FC Tulsa will throw at the Boys in Blue.

While Head Coach Michael Nsien may list the talented native of Rio de Janiero as his lone striker, do not get fooled into thinking da Costa is a one-trick pony. The product of Florida National University (and a member of the Florida Soccer Soldiers amateur side before they were “U.S. Open Cup cool”) has become one of Tulsa’s most prolific offensive talents in club history after only two years of play, entering the season as the Oklahoma side’s career leader in assists (15) and its third-leading scorer (13).

He’s shown no sign of slowing down either, bagging a 14th minute game-winner last weekend against Sporting KC II and assisting on Suarez’s insurance tally 11 minutes later, completing three key passes, suffering a team-high four fouls won, and putting both of his shots in the early season on frame in 151 minutes of action. He’s the proverbial straw that stirs Tulsa’s drink, and he’ll get plenty of attention from Cochran & Co. come Saturday night at The Mike. 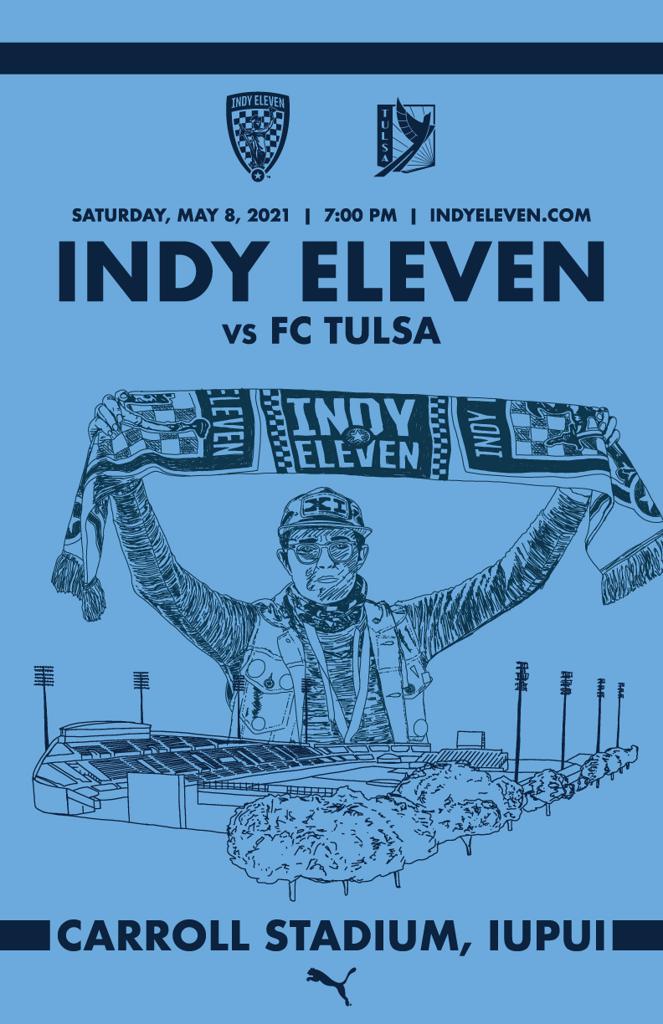 Thanks to longtime volunteer designer and Indy Eleven supporter Zach McNulty for putting together the first Gameday Poster of 2021, an homage to the evening's Blue Out and return to The Mike! 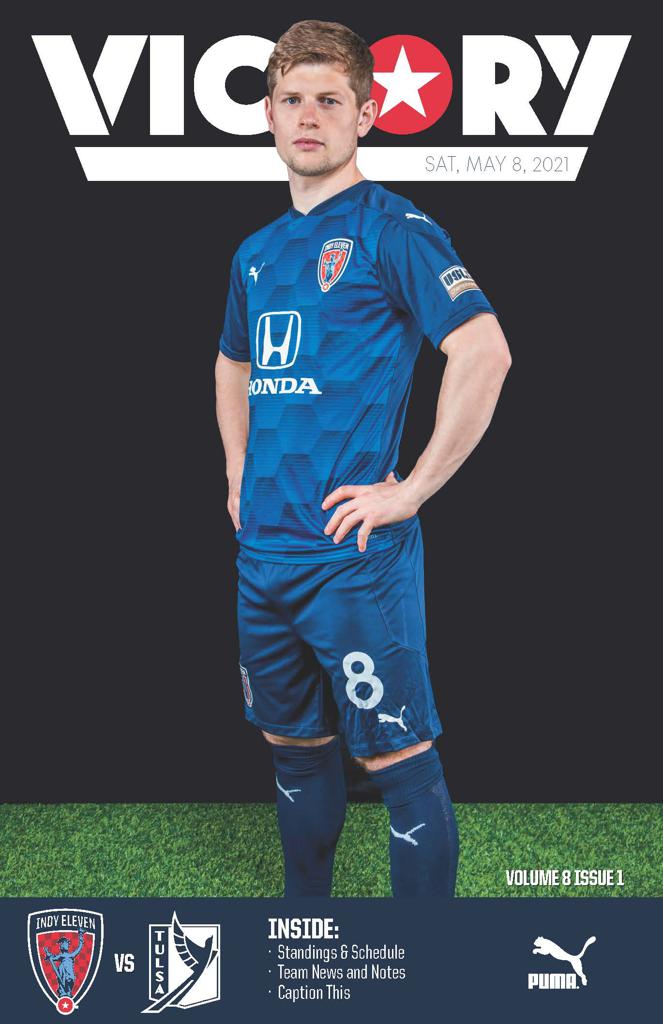 Get a sneak peek at Saturday's Official Gameday Program!