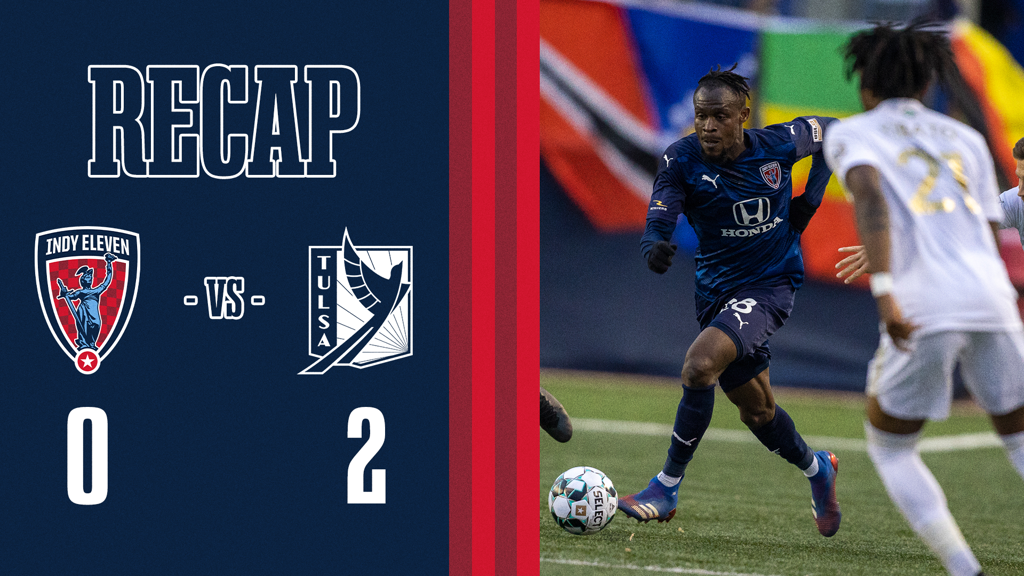 INDIANAPOLIS – Indy Eleven saw a promising start turn to disappointment in its return to IUPUI’s Michael A. Carroll Stadium, as a pair of second half goals by FC Tulsa midfielder Joaquin Rivas led to a 0-2 defeat in its 2021 home opener.

“Our preseason was very good and our first away game last weekend was very good and we had a really good week of training, the guys were very focused and on top of things, so coming into tonight I was expecting a good performance and a good result, but we didn’t get it,” explained Indy Eleven Head Coach Martin Rennie. “We have to learn lessons from the mistakes that we made. We have two weeks of training until we play again to do that. There wasn’t too much in the game tonight, but obviously we are expecting to win at home and that’s something that we’ve got to get going pretty quickly.”

A pair of set pieces for both teams were left wanting in the first ten minutes, and the first dangerous look of the match fell to the Eleven and another one near the quarter hour when Nicky Law’s cleared corner kick made it only as far to the edge of the area. That’s where midfielder Aboubacar Sissoko latched onto it, only to drag his solid effort wide of the left post.

In the 22nd minute it was Indy forward Manuel Arteaga being gifted a turnover by FC Tulsa at just about the same spot, and with the same result on the shot. The Indy pressure continued in the 25th minute, when Sissoko was again on top of a cleared header, his redirect towards goal finding the head of defender Neveal Hackshaw, who couldn’t steer it on frame from the edge of the six-yard box.

The 35th minute saw Nick Moon spring into action for Indy, as the winger found a sliver of space in the right side of the area to fire off a short-angle blast that beat Tulsa ‘keeper Sean Lewis but slammed off the base of the near post. The half expired with Indy holding a 5-1 advantage in shots, but none of those chances tested either netminder in the scoreless first 45.

The second half sprung to life in the 53rd minute, when Moon’s cross to the back post found a streaking Patrick Seagrist, who tried to flash a header across the box only to have Lewis bat it out of harm’s way. On the other end a through ball deep into the Indy area nearly found a pair of Tulsa runners, but Eleven goalkeeper Jordan Farr was quick to rush off his line and slide in to thwart the chance.

Tulsa knicked the opener against the run of play in the 62nd minute when captain Bradley Bourgeois’ cross from the right flank found the head of Joaquin Rivas near the spot. The Tulsa midfielder’s header snuck just past a diving Farr and inside the left post to move the scoreboard for the visitors first.

“Up until that point I thought the game was going decent against a team that has started the season well and is obviously a good team. And then I think the response to the goal was not quite as good as I would have liked,” said Rennie. “I think we were a little frantic in our play and giving the ball away a bit much and not putting them under enough pressure.”

Rennie inserted Ayoze and Gordon Wild with 20 minutes left in an attempt to spark the Eleven attack, with Wild first asserting himself in the 75th minute with a lengthy run up the middle of the field that ended with a deflected shot that bounced to Lewis.

Kembo Kibato tried to double the advantage for Tulsa from distance in the 79th minute, but Farr was on the spot to grab the chance on this line. However, a minute later Tulsa was set up for their second via a point to the spot, called when Indy defender A.J. Cochran was deemed to have taken down Jerome Kiesewetter inside the area. It was Rivas stepping up and roofing the penalty kick to secure his second brace in three games to start the season and give Tulsa a 2-0 lead.

Indy earned a PK of their own in the 88th minute when a floated cross in the area hit the outstretched hand of Modou Jadama. However, Ayoze’s attempt from the spot banged the crossbar and bounced out of danger to take the wind out of Indy’s comeback sails.

Indy Eleven will enjoy an early bye week before returning to action at Carroll Stadium on Saturday, May 22, when the Boys in Blue will play host to Sporting Kansas City II. Ticket information for the 7:00 p.m. ET kickoff will be updated as soon as possible, but Indy Eleven Season Ticket Members are confirmed to have access to “The Mike” for the match. For those who cannot make it “Back Home Again,” fans can follow along live on MyINDY-TV 23, ESPN+, and Exitos Radio 94.3 FM/exitos943.com (Spanish audio broadcast).