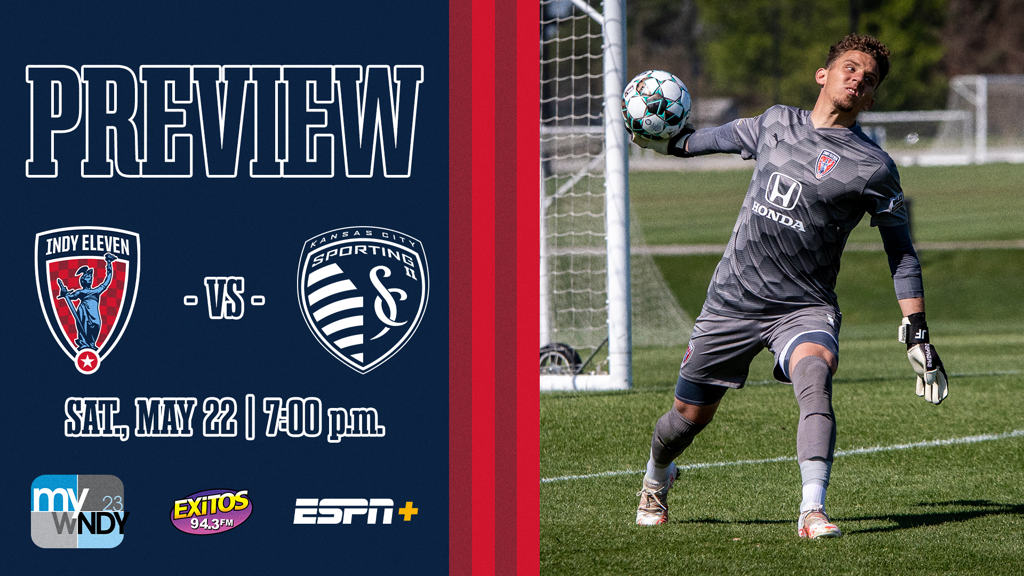 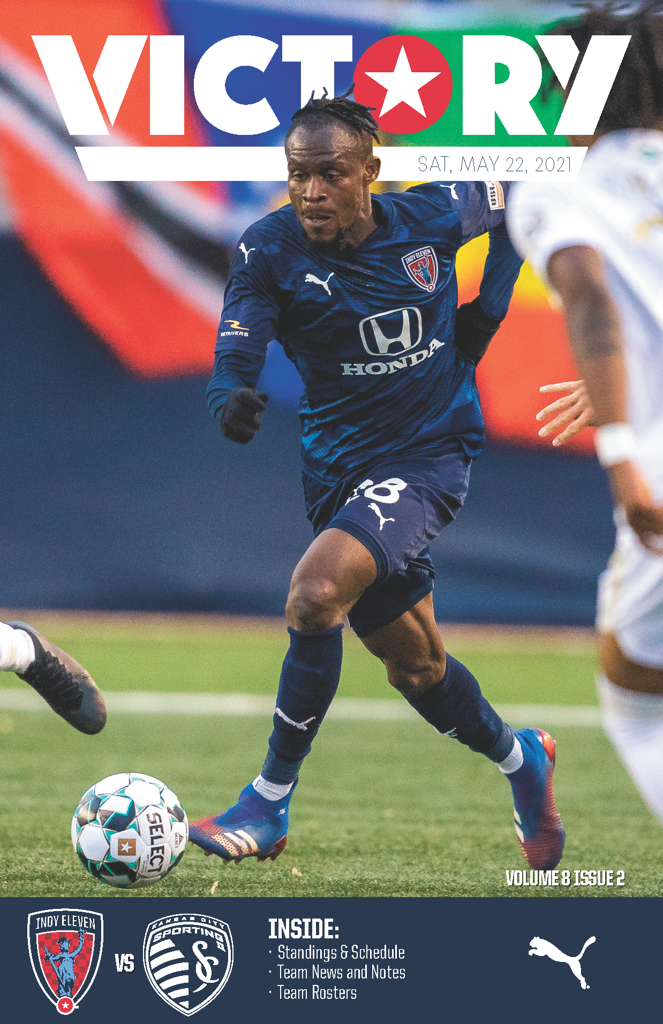 Get a Sneak Peek at Saturday's VICTORY Gameday Program 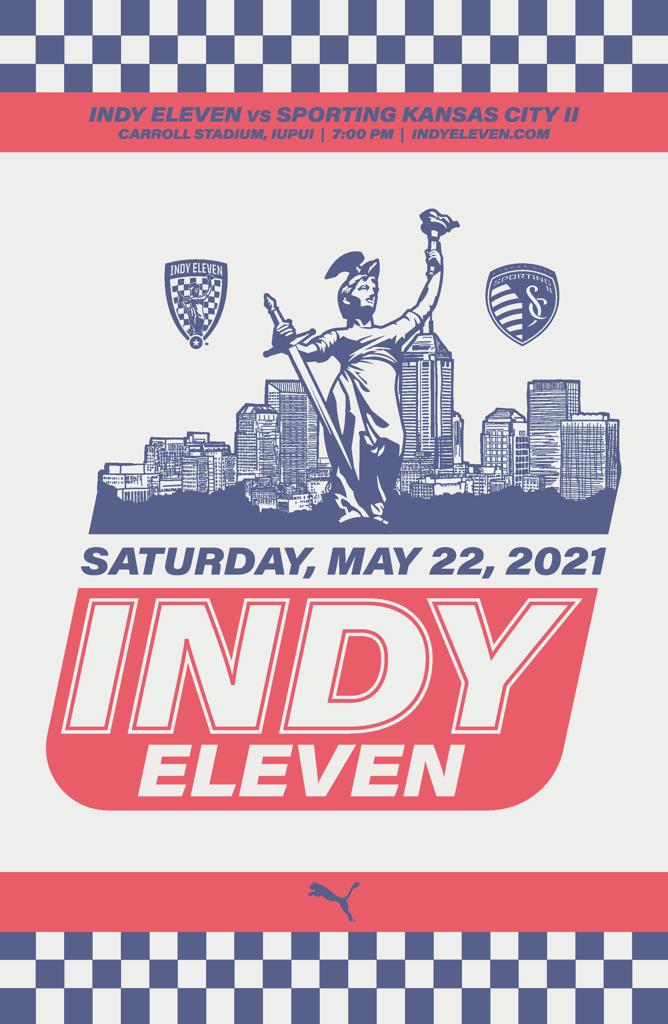 Kudos to Zach McNulty for his Racing Indy Night gameday poster that pays homage to the classic 1986 Indy 500 logo! Pick up yours Saturday at the Guest Services tent, located on the West Concourse at Carroll Stadium.

The “Airing of Grievances” may be a Festivus tradition each December, but Indy Eleven will need not wait so long to share its problems with Sporting Kansas City II left over from the 2020 campaign. The two Central Division sides square off in the first of four 2021 meetings Saturday at The Mike, and while SKC enters the contest winless in their first four outings of the season, Indiana’s Team doesn’t need to be reminded of the “feats of strength” the Kansans can display after last year’s surprising season split.

Why would the Boys in Blue seek revenge against the squad that it finished seven points above in the Group E standings last year? Firstly, SKC earned one of the shock results of the Championship season last Aug. 1, their 1-0 triumph at Lucas Oil Stadium snapping the second-longest home undefeated (28 games) and winning (11 games) streaks in USL Championship history.

More importantly, Sporting’s 2-1 victory over the Eleven on Sept. 30 denied the Boys in Blue the chance to clinch a postseason berth in their penultimate game of the regular season, a quest that fell two points short of its aim one week later. The lack of playoff soccer for the first time since joining the USL in 2018 was indeed a considerable driver in Indy’s offseason roster makeover – and precisely because there are so many new faces around, revenge may not be the primary source of motivation for Indiana’s Team this week.

If one bit of history does pull through, the hope is for the continuation of entertaining affairs with ample goals being scored. Indy Eleven has bagged multiple goals in four of the six previous contests (1.67 avg.), while Sporting has scored in every meeting – one goal in five games and two in the other (1.17).

A considerable factor on Saturday will be the amount of rest each team will have had entering what is expected to be the hottest day in the Circle City thus far in 2021. Indy has had ample time to get on the same page following its last run out back on May 8, a 0-2 defeat to division-leading FC Tulsa, while Sporting KC II will be traveling cross country and playing on two days’ rest after dueling LA Galaxy II to a 1-1 road draw on Wednesday night.

This series is a relatively new one for Indy Eleven, beginning in 2019 after the “artist formerly known as Swope Park Rangers” (changed after the 2019 campaign) jumped to the USL Championship’s Eastern Conference.

Last year’s four-game series – contested entirely at Lucas Oil Stadium – was split down the middle, with each squad alternating hard-fought, one-goal victories during the condensed calendar. Indy captured a pair of 2-1 victories on July 18 and Sept. 9, with Paddy Barrett and Jeremy Rafanello bagging second half game-winners, respectively. The Sporting KC II wins ... well, refer above for the heartbreak those caused, no need to rehash them here once again.

Above we discussed how revenge may not be a dish served hot on Saturday night ... but you may forgive Farr if that’s not the case. After seeing considerable time between the posts in 2019 while spelling an injured Evan Newton, Farr would start only one contest in 2020 – the 0-1 defeat in August that snapped Indy’s pair of near-league-record home streaks. Despite not having much work to do on the evening – he faced only one other shot on frame outside of Daniel Barbir’s 70th minute tally – Farr was doomed to the hard-luck “L” on his ledger after none of the Eleven’s 13 shots hit paydirt. Between the bad taste that loss left and conceding twice the last time our against Tulsa, you better believe the new #1 netminder for Indiana’s Team in 2021 will be itching to leave his mark on Saturday night.

The Sporting Kansas City II roster is, not surprisingly, rich with homegrown talent, developed over the years by the MLS club’s acclaimed Academy set-up. Mensah is not “that guy” – in fact, he is one of the few “outsiders” brought in by SKC II Head Coach Paolo Nagamura over the offseason, and the fact the organization would go outside of their sphere is perhaps all you need to know about how much they value the Ghanaian forward. Despite being only 23 years of age, Mensah has already made a name for himself in USL circles in short order, collecting 26 goals and 14 assists in 61 starts for Penn FC (2017), Nashville SC (2018-19), and Pittsburgh Riverhounds SC (2020) the last four seasons.

After missing SKC II’s first two contests, Mensah added another tally in the assist column in his second start Wednesday at LA Galaxy II – on a play where he hit the post on a shot and hustled to recycle the rebound into a cutback helper on Dominik Resetar’s opener on the hour mark. That play is just a snapshot of the target man’s active evening, which featured his assist, three shots, two chances created, two offsides, and a slightly terrifying 30 duels entered (winning exactly half).