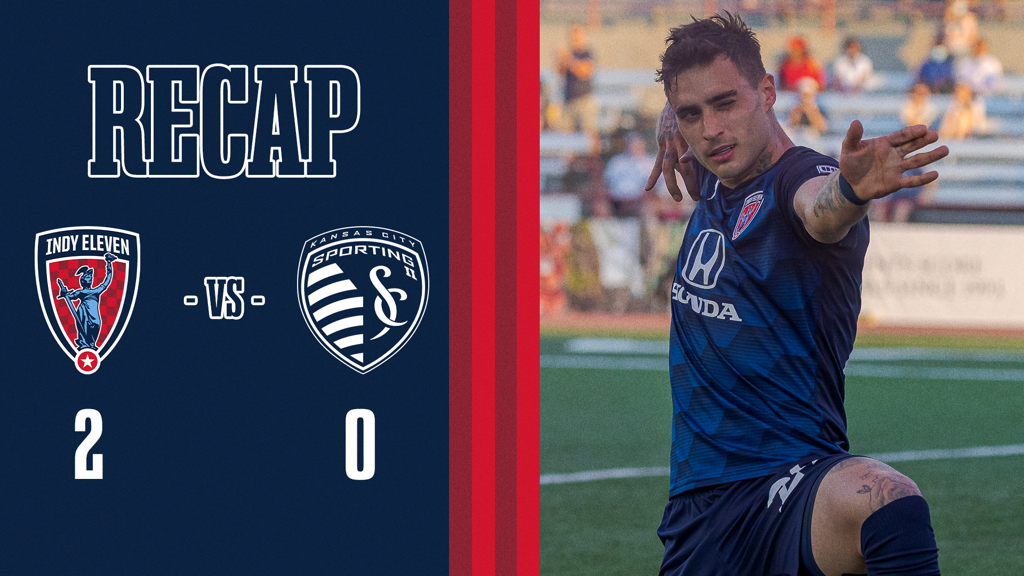 “(Attacking) was something we obviously talked about after the last home game, needing to take a little bit more risk, needing to play forward a bit more, create with a little bit more tempo and speed,” said Indy Eleven Head Coach Martin Rennie, who was able to celebrate his birthday with the team’s first home win of the season. “It really started to come together in the second half. I thought that we definitely deserved the chances and the goals that we got, and we created some other good chances that were just a little bit off. Overall it’s a very good win for us.”

The start of the match was devoid of many quality chances, the first look of any danger coming in the 14th minute when Hamilton raced to reach midfielder Nick Moon’s ball over the enemy backline, but SKC ‘keeper Kendall McIntosh barely reached it first and was able to head the ball into safety from just outside his area.

In the 24th minute it was the Eleven nearly finding paydirt on a free kick from just left of the area, but defender Neveal Hackshaw headed forward Wild’s delivery to the top of the six just wide of the left post. Wild took matters into his own feet on another free kick on the half hour mark, forcing McIntosh into a difficult save at his upper right corner on a shot from 30 yards.

Wild was at it again off a short corner with midfielder Nicky Law three minutes later, accepting the return and running towards goal before firing a low shot into the near side netting. Another Law corner in the 42nd minute found the head of center back A.J. Cochran, but his attempt from the six was sent right to McIntosh on his line. Despite holding a 6-1 advantage in shots in the opening stanza, Indy Eleven would enter the halftime break still knotted at nil-nil.

Indy’s plethora of set piece opportunities finally paid off in the 53rd minute. Wild’s outswinging corner service to the six met the head of Hamilton, who thundered home the chance to give the Canadian his first goal for the Boys in Blue and the Eleven a deserved 1-0 advantage.

“Our assistant coach Max [Rogers] put together some (set piece) plays, and he actually wanted me on the goalkeeper,” explained Hamilton. “But I told him, ‘No, I score headers.’ So I cheated off the goalie a little bit and that’s why I was in that position and I proved him right, so we had a little bit of a laugh at that.”

Fittingly on Racing Indy Night, the Eleven attack kept its collective foot on the pedal, continuing to rush numbers forward. Wild forced McIntosh into a low, diving save at his left post in the 56th minute before playing provider once again on Indy’s second in the 65th minute, this time slipping Arteaga into the area. The Venezuelan did well to cut back and find a yard of space before curling a low shot from 15 yards out that bounced squarely off the base of the far-right post and in, doubling the Indy lead at 2-0.

Sporting Kansas City’s first shot on goal came on a free kick in the 75th minute, but the attempt from 30 yards by Ropapa Mensah was reflective of the Kansas side’s increasingly tired legs, taking a couple of bounces before being easily saved by Eleven netminder Jordan Farr.

On the other end it was Arteaga attempting the spectacular in his chase for a brace a few minutes later, his sidewiding shot forcing McIntosh to make a crafty tip over his crossbar. In the 84th minute Arteaga had a more conventional chance to move the scoreboard, but his chip of Moon’s square ball just missed the upper right corner. SKC had one last chance to get back in the game in the 88th minute, Tyler Freeman’s cheeky turn and backheel inside the area finding the run of Bailey Sparks, whose low shot was saved well by Farr.

Indy Eleven will renew one of the USL Championship’s most heated rivalries the next time out, as Indiana’s Team will cross the Ohio River next Saturday, May 29, to take on Louisville City FC. The first of four LIPAFC (Louisville-Indianapolis Proximity Association Football Contests) in 2021 is set to kickoff from Lynn Family Stadium at 7:30 p.m. ET, and fans can watch the action live via streaming video on ESPN+ and follow live updates from the @IndyElevenLive Twitter feed, presented by Central Indiana Honda Dealers.

After that rivalry showdown, Indy Eleven will return home for back-to-back home games on Wednesday, June 2, against OKC Energy FC (live on MyINDY-TV 23, ESPN+ and Exitos Radio 94.3 FM/exitos943.com) and Saturday, June 5, versus Memphis 901 FC (WISH-TV, ESPN+ and Exitos Radio 94.3 FM/exitos943.com).  Tickets for both 7:00 p.m. kickoffs at Carroll Stadium are now available and can be purchased at indyeleven.com/tickets or by calling 371-685-1100 during regular business hours.