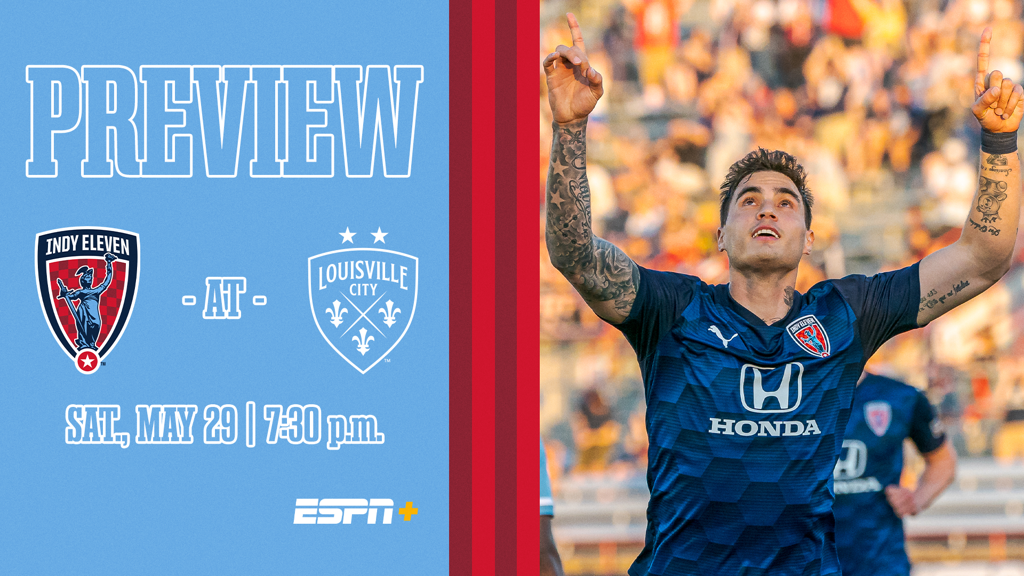 Take the history of Yankees-Red Sox, throw in some of the petty vitriol of Ohio State-Michigan, and finish with a splash of the begrudging respect of Balboa v. Drago (and perhaps some of the latter’s fictional leanings) and what do you get? The Louisville-Indianapolis Proximity Association Football Contest, of course, the 2021 edition of which kicks off Saturday night on the wrong side of the Ohio River.

The first of four regular season LIPAFC installments should serve as a fair test for both rivals, each of which have registered two wins in their first three contests. Those results include home triumphs last Saturday that marked each squad’s best showing of 2021 so far – Indy Eleven a 2-0 victor over Sporting KC II at “The Mike”, and Lou City a 2-1 winner over San Diego Loyal SC at Lynn Family Stadium.

Indy Eleven’s three run outs so far have followed pretty different scripts – an opening win at Birmingham Legion FC led by stout defense and an opportunistic finish, a home loss against FC Tulsa that saw the squad dominate possession but eventually chase the game after failing to convert on its chances, and the win over SKC II that was the most complete effort of the early season on both sides of the ball.

Last Saturday’s affair saw Head Coach Martin Rennie trot out a new-look 3-4-3 formation that allowed the new forward trio of Jordan Hamilton (goal), Manuel Arteaga (goal), and Gordon Wild (two assists) shine throughout. With Hamilton and Wild at full health for the first time in the regular season, fans got their first look at the fruits of the Eleven’s offseason attacking overhaul – and the early results were more than favorable, resulting in eight shots on goal and myriad chances both from the run of play and set pieces. Meanwhile, a high-pressure defensive approach throughout the evening saw Indiana’s Team allow only three shots – and no attempts on target until the 75th minute – en route to a second clean sheet for the squad collectively and goalkeeper Jordan Farr individually.

Meanwhile, while Lou City FC has thrown out three different formations in as many contests (and even switched head coaches on the fly after its season opener in late April), its overall philosophy has not seemed to change in the slightest – dominate possession and the chances will come. LCFC has hovered near 60% possession in each match and collectively outshot the opposition 57-23 (20-8 on goal), but even with those commanding figures Lou City registered a closer-than-it-appeared 2-0 win over Atlanta United 2 and a 1-1 draw against Birmingham before last weekend’s more comfortable breakthrough over San Diego.

So, what will we see when the greatest rivalry known to mankind is rekindled Saturday in Kentucky? Will Rennie stand his charges down and look to absorb Lou City’s standard possessive approach? Or bolstered by last weekend’s performance, will he release the attacking hounds in an attempt to flip his side’s recent LIPAFC fortunes? Will recently installed LCFC sideline boss Danny Cruz have some new wrinkles to show Indy up his sleeve? Or does he stick with what has kept his side undefeated at home through three times out, looking to keep the Eleven on its heels? Only the next riveting 90 minutes of the fabled LIPAFC rivalry will answer those questions.

Forgive Indy Eleven fans if they would rather forget the “modern era” of the LIPAFC rivalry, which Louisville City has controlled over the last three seasons. Since joining the USL Championship in 2018, Indiana’s Team has garnered just one win in nine regular season meetings – and that coming right out of the gates in May 2018 courtesy of an Ayoze PK-fueled 1-0 win at Lucas Oil Stadium. Throw on top of that postseason losses to LCFC in both 2018 & 2019 and you get a 10-game overall winless streak (4 draws, 6 losses) that Indy Eleven players, coaches, fans, mascots – anyone associated with the squad, really – is desperate to see snapped.

Despite the mostly forgettable results, Indy Eleven has actually managed to bring a point back across the river from three of its five regular season meetings in Louisville, including their first match at Lynn Family Stadium last August 8, a 1-1 draw that saw Tyler Pasher equalize near the hour mark. However, things went south for the Eleven from there, with LCFC collecting wins in their final three meetings, a 1-0 triumph in Kentucky followed by two disappointing results 11 days apart at Lucas Oil Stadium (1-3 L on Sept. 5 and 0-2 L on Sept. 16).

The 2021 series will continue back in Louisville on June 26 before again renewing late in the season in Indianapolis with games on Sept. 18 and Oct. 16 at Carroll Stadium.

Much consideration was given to reigning USLC Team of the Week member Gordon Wild, but we instead favor Arteaga for this weekend’s affair because ... energy.

When you’re trying to flip the script in a derby, you need someone who’s going to put forth a relentless amount of energy and display a real sense of passion – and perhaps a fair amount of “bite” as well.  Someone whose effort can spark his teammates to reach a little deeper in those pivotal moments, and maybe pull a little magic out of his hat. Enter the Venezuelan striker, who has displayed the willingness to keep up constant pressure on both sides of the ball – and has not been shy to try and pull off the magnificent during his short stint for the Boys in Blue.

Plus, the dude’s gonna shoot his shot(s). Arteaga’s 12 shots from just three games are the fourth most in the Championship thus far, and he’s probably unlucky to only have two goals from his four shots on target in 242 minutes. Bottom line, Arteaga is going to look to make stuff happen, and with two of the team’s three goals to this point under his belt, he’s a pretty good candidate to keep that trend going. He also might be the best bet to be the first player other than Pasher to hit the back of the net against LCFC since the 2018 campaign, a streak spanning seven matches in the series.

Speaking of someone who’s not shy to shoot ... enter last season’s reigning USL Championship shot-taker Mr. Lancaster, who paced the shortened 2020 season with 58 attempts towards goal and already has 10 shots this season through three games.

After placing third on last year’s Golden Boot chart with 12 tallies, the London native opened his 2021 scoring account with the opener in Lou City’s win over San Diego last Saturday. The brash 28-year-old striker’s three goals are the most for a Louisville City FC player in the LIPAFC’s modern era, and now that he’s off the scoring schneid this season you can bet he’s itching to add to that total on Saturday night.