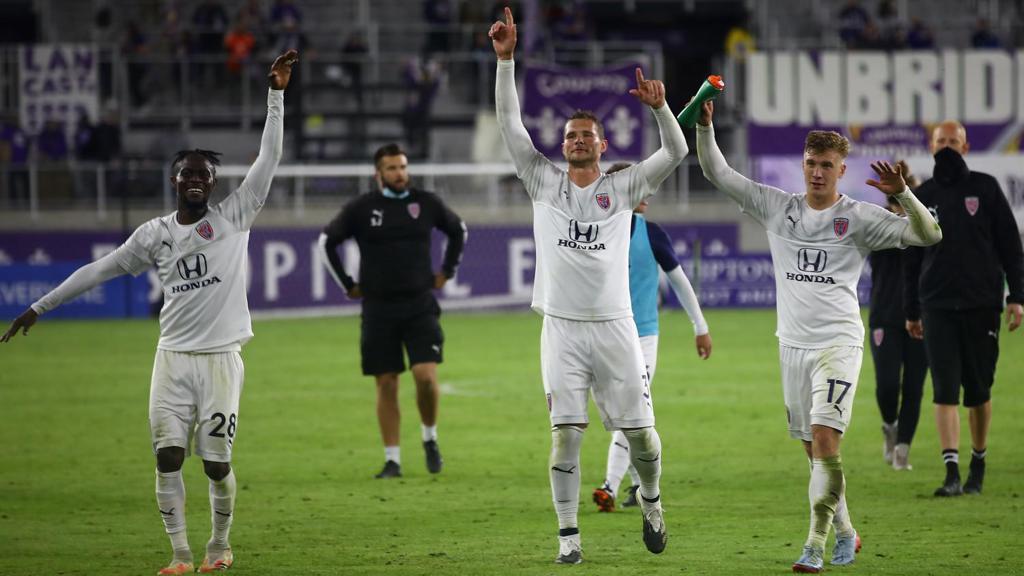 LOUISVILLE (Saturday, May 29, 2021) – Indy Eleven used a pair of penalty kick conversations by forward Jordan Hamilton in the second half to notch a 2-1 comeback victory over Louisville City FC in a riveting chapter of the Louisville-Indianapolis Proximity Association Football Contest rivalry. The triumph in front of 10,731 fans at Lynn Family Stadium snapped Indy Eleven’s (3W-1L-0D, 9 pts.) 10-game winless streak against its archrival dating back to their first USL Championship meeting in 2018 and put Indiana’s Team atop the Central Division table alongside FC Tulsa after four games.

The goals were Hamilton’s second and third of the early 2021 season, with all three tallies coming in Indy’s last two contests. His PK finishes marked the only two shots on goal for an opportunistic Eleven side that proved difficult to break down and found its best attacking form in the second 45 minutes.

“The players just showed so much character and determination and belief, and that’s really important to see,” said Indy Eleven Head Coach Martin Rennie. “Without that you can’t be successful, but with that you can do a lot, so seeing that belief and that character really made me happy.”

Indy Eleven did a superb job of soaking up Louisville’s possession advantage early on, with only City FC forward Cameron Lancaster’s first time shot from 20 yards in the eighth minute giving Indy goalkeeper Jordan Farr even the feintest of trouble. Lancaster was also at the center of the game’s next moment in the 11th minute, his tackle from behind on Eleven midfielder Patrick Seagrist earning the Englishman the game’s first caution. Two minutes later Lancaster nearly got on the end of a lengthy ball up Route 1, but he instead met the firm and fair shoulder of Farr, who read the ball accurately at the top of his area and drew the better of their collision.

At the half hour it was Indy flexing its best attack of the first half thus far, midfielder Nick Moon gaining half a yard on his man in the right side of the area before crossing for Seagrist, only to see the ball float just over his back post run. Lancaster was at it again in the 35th minute, turning and firing from the edge of the area but seeing his shot rise over the bar, followed shortly by Niall McCabe doing the same from 10 yards farther. A minute later it was Seagrist crossing back post from the left side of the LCFC area, and while Hamilton’s sliding redirection inside the six hit the outside of the netting, the bang-bang chance was deemed offside regardless.

Indy Eleven nearly got into the halftime break unscathed, but Lancaster inserted himself into the action again in the 45th minute to help the home side to its opener. McCabe’s cross towards the six looked like it might be cleared out, but Lancaster stepped across to get a touch that laid the ball off for midfielder Corben Bone, whose laser from 10 yards beat Farr at his left post to put LouCIty FC up 1-0 heading into the half.

Despite officially being outshot 10-0 in the opening stanza and down a goal, Rennie saw plenty of resolve in his charges coming out of the break.

“The players put that goal behind them and just came out and really stayed focused on what they had to do,” explained the Indy sideline boss. “They increased their energy, increased their tempo, and really finished the game strong – and looked good doing it.”

Controversy came in the 57th minute when Indy midfielder Gershon Koffie tried to get around Paolo DelPicclo just inside the area, the Ghanaian going down after what appeared to be a quick two-handed shove by the Louisville captain. In the end, neither Koffie nor DelPiccolo got the point to the spot or yellow for simulation from referee Elijio Arreguin that they wanted – but six minutes later he would indeed reward a penalty kick to the visitors.

Indy earned the chance through a nice tackle by midfielder Nicky Law in his final third and fast distribution by Peter-Lee Vassell on the counter that found Hamilton in space. The Canadian carried into the left side of the area and rode the sliding challenge of defender Sean Totsch to win the PK, which he slotted left after sending LCFC ‘keeper Chris Hubbard the wrong way to even the LIPAFC donnybrook at 1-1.

The Boys in Blue managed the rest of the match expertly, allowing only half chances and shots from distance until extra time – just before which they took the lead again through Hamilton from the spot. Substitute forward Manuel Arteaga’s press in the center circle forced a miscue by former Eleven midfielder Tyler Gibson, allowing the Venezuelan striker to strip defender Alexis Souahy and race in unimpeded on Hubbard, whose sliding challenge at the top of his area was fortunate to draw only a yellow card along with the penalty concession. Hamilton got the better of the 12-yard duel with Hubbard for a second time, his shuffle step again forcing Hubbard to react early. The finish into space, this time to the right, allowed Hamilton and Indy to grab the lead just before the match entered five minutes of stoppage time.

The final 90 seconds saw some nervy moments, McCabe dragging a shot from 20 yards just wide left and DelPiccolo’s onrushing effort from the same distance soaring over the Indy goal. Shortly after the latter attempt, the final whistle signaled a breakthrough win for a new-look Indy squad, one that may have very well set a new tone in one of the USL Championship’s most high-profile derbies.

“It’s a new team, it’s a new group of players. We made quite a lot of adjustments so that we could win games like this. It’s nice to do that, and obviously we have to keep doing that,” expressed Rennie. “It’s 2021, it’s a new season. In life, if you focus too much on the past you miss the present moment and the future opportunities, so I’m not too much focused on what’s happened in the past.”

Tonight’s match was the first of five games in an 18-day stretch for Indy Eleven that continues with back-to-back home games this Wednesday, June 2, against OKC Energy FC (live on MyINDY-TV 23, ESPN+ and Exitos Radio 94.3 FM/exitos943.com) and Saturday, June 5, versus Memphis 901 FC (WISH-TV, ESPN+ and Exitos Radio 94.3 FM/exitos943.com).  Tickets for both 7:00 p.m. kickoffs at Carroll Stadium are now available and can be purchased at indyeleven.com/tickets or by calling 371-685-1100 during regular business hours.