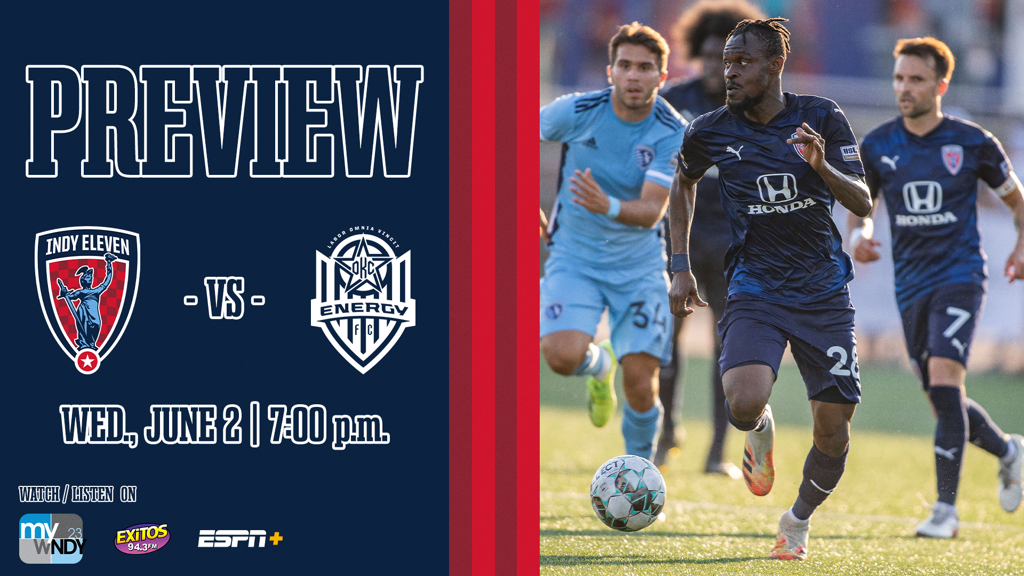 Winners of two in a row and three of its first four contests, Indy Eleven will enter its lone Wednesday home contest of the 2021 season against OKC Energy FC trying to sustain its hot start to the USL Championship campaign. On paper, the match-up against a winless OKC side looks favorable for Indy to do just that, however, with both teams entering on short rest the supposed script could be torn up should both managers look to turn over their sides during a congested period on both club’s calendars.

For Indiana’s Team, Wednesday’s affair will be the second match of a 5-game, 14-day slate that kicked off about as successfully as could be imagined on Saturday night via a 2-1 comeback win at Louisville City FC. In that palette-cleansing rivalry result for the Boys in Blue, forward Jordan Hamilton struck twice from the penalty spot in the second half, including the game-winner in the 88th minute that snapped a 10-game winless streak in the legendary LIPAFC series.

Perhaps more importantly, that result helped to further forge the identity of a new-look Eleven side that is still very much learning how to play together, with Head Coach Martin Rennie praising his group’s resolve, determination, and focus after the match. With the Boys in Blue returning home, look for Rennie’s charges to carry out a similar plan on Wednesday night as they did in their previous contest at “The Mike”, a thorough 2-0 victory over Sporting KC II on May 22 that saw a pressing 3-4-3 formation impose its will on both sides of the ball.

On the other side, OKC Energy FC will be playing its third game in eight days, the first two seeing the Oklahoma outfit dueling to a scoreless draw against Memphis 901 FC at home on Saturday after falling 0-1 at Birmingham Legion FC last Wednesday. When coupled with a 1-1 draw at Sporting KC II earlier in May, Energy FC has shown the ability to make things tight on the road, so it will be contingent upon Indiana’s Team to try and unlock what has been a fairly stingy OKC defensive unit that has allowed one goal or fewer four of its six times out. It’s the Energy FC attack that has been less consistent, midfielder Villyan Bijev doing the heaviest of the lifting so far after playing a hand in three of their foul goals to date (two assists, one goal).

While Indy Eleven is no stranger to Sooner State squads having squared off against Rayo OKC during the 2016 NASL season (2W-1L-0D, all 2-1 scorelines, for the record), this will mark the first match-up between the two clubs born in 2013 and currently in their respective eighth seasons of play.

The most famed link between the two sides was defender and IUPUI-product Kyle Hyland, who suited up for Indy Eleven’s first two seasons in 2014-15 before landing with Energy FC for the 2016-20 campaigns.

These three-game weeks make this space a little more of a crap shoot when it comes to knowing who will be in the XI each time out, but our guess is that the veteran midfielder will be in the mix – and mixing things up, per usual.

You’re not going to see a lot of the “sexier” stat numbers – goals and assists – in Koffie’s columns; it’s not that he’s incapable of a final unlocking pass or a savvy finish, it’s just that’s not necessarily what his deep-sitting midfielder role is all about. So, you have to look a little deeper at what he provides – and Saturday night that was playing smart passes in order to keep some possession and a willingness to do the dirty work – drawing fouls (3), winning duels (5 of 7), and winning clearances when needed (3).

The #6 role is not glitz and glamour, so if you haven’t noticed the solid contributions of Koffie to this point, that’s okay. Against a team like OKC that may pack things in a little more when playing away, you may just get to see Koffie shine a little brighter with more chances to see the ball.

There will be one familiar face on the away bench Wednesday in Osmond, who logged more than 1,800 minutes in 24 appearances (20 starts) across the 2019-20 campaigns for the Boys in Blue. While the affable Aussie was a dependable spot starter for Rennie sides the last two years, he has found himself a fixture in his new home, serving as one of four players to log all 540 minutes in Energy FC’s six games to date.

As expected, Osmond is at or near the top in every meaningful defensive statistical category for OKC, including 25 clearances that rank the 6’3” center back third across the Championship. However, Indy better not sleep on ol’ Mitch when he’s in the final third, as he already has a goal to his name and placed three of his four shots on target – with both of those numbers placing third on the OKC squad.