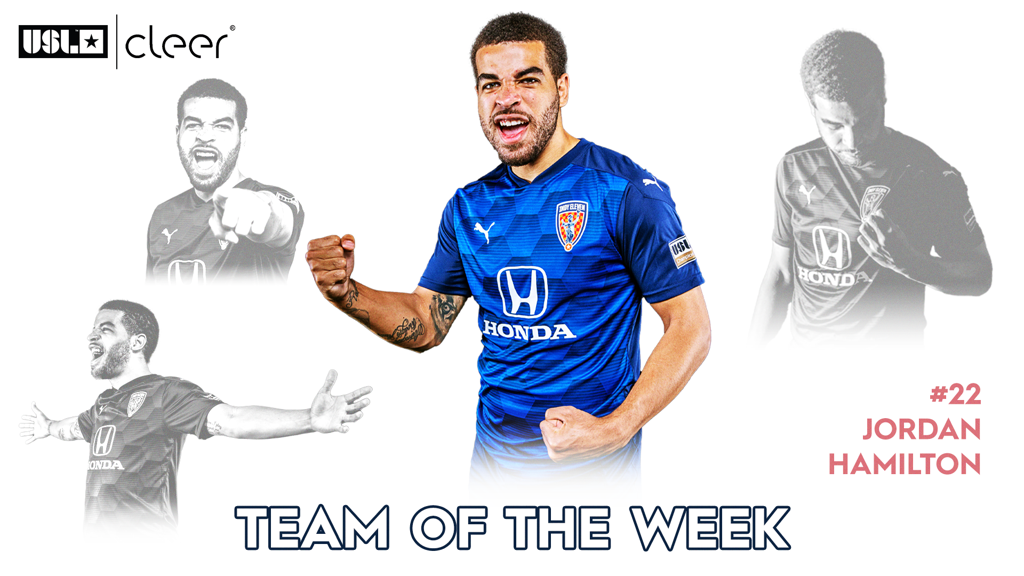 INDIANAPOLIS – For a second straight week Indy Eleven placed a forward on the USL Championship’s Team of the Week Presented by Cleer Audio, with striker Jordan Hamilton this time earning the recognition for his Week 6 performance.

The native of Scarborough, Ontario, earned his TOTW nod by notching a pair of penalty kick conversions in last Saturday’s 2-1 win at Louisville City FC, which snapped the Eleven’s 10-game winless streak in the rivalry series. Hamilton earned the first spot kick himself after drawing a foul inside the penalty area in the 63rd minute and stepped up to take the crucial winner from the spot in the 89th minute after fellow forward Manuel Arteaga was taken down by the ‘keeper a minute earlier.

Since injury limited the 25-year-old striker to substitute appearances in Indy’s first two contests, Hamilton has scored three times across his first two starts, including the game-winners in both the Louisville victory and a 2-0 triumph over Sporting KC II on May 22. For more details on the two-time MLS Cup champion and prolific USL Championship scorer, click here to visit his bio page on indyeleven.com.

Hamilton is the third member of the Boys in Blue to earn a weekly recognition from the USL Championship thus far in 2021, coming on the heels of forward Gordon Wild’s Best XI placement last week (Week 5) and defender A.J. Cochran’s “honorable mention” nod on the Week 2 TOTW bench. The Championship’s Player of the Week is selected by the USL National Media Panel, which is made up of representatives from each media market in the Championship.

Indy Eleven returns home this week for back-to-back home games on Wednesday, June 2, against OKC Energy FC (live on MyINDY-TV 23, ESPN+ and Exitos Radio 94.3 FM/exitos943.com) and Saturday, June 5, versus Memphis 901 FC (WISH-TV, ESPN+ and Exitos Radio 94.3 FM/exitos943.com). Tickets for both 7:00 p.m. kickoffs at Carroll Stadium are now available and can be purchased at indyeleven.com/tickets or by calling 317-685-1100 during regular business hours. Both matches can also be followed in real time via updates on the @IndyElevenLive Twitter feed, presented by Central Indiana Honda Dealers.

M – Danny Griffin, Pittsburgh Riverhounds SC: Danny Griffin scored the opening goal in the Hounds’ 3-0 victory against the New York Red Bulls II and also won 4 of 4 tackles and made nine recoveries and three interceptions during the contest.

F – Jordan Hamilton, Indy Eleven: Jordan Hamilton scored both goals for Indy from the penalty spot, including the side’s late winner, and completed 12 of 16 passes as Indy defeated Louisville for the first time since 2018.

F – Jonny Bolivar, Loudoun United FC: Jonny Bolivar scored his first goal for Loudoun to lift the side to a 1-0 victory on the road against New Mexico United, while also recording six shots overall and completing 11 of 15 passes.