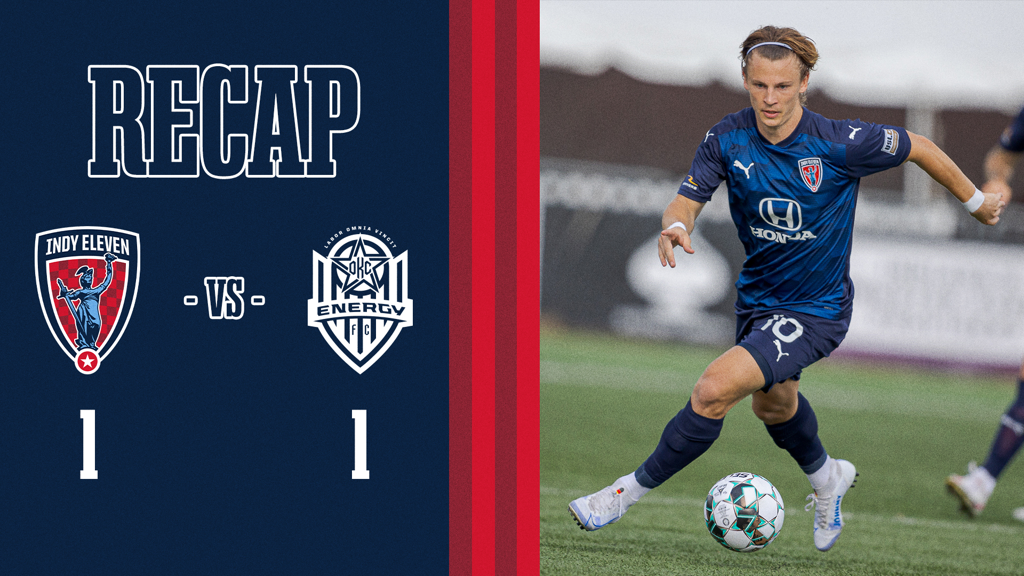 INDIANAPOLIS – Indy Eleven used a late first half goal by midfielder Nick Moon to take a lead over OKC Energy FC, but the visitors would find a second half equalizer through Frank Lopez to force a 1-1 draw at IUPUI Michael A. Carroll Stadium. The result kept Indy Eleven unbeaten in its last three times out (2W-0L-1D) and pushed Indiana’s Team back atop the Central Division standings, its 10 points even with Birmingham Legion FC.

“I really felt like the whole team the first half was pretty good, the second half wasn’t quite as energetic and as driven from the team as I was expecting. I felt like we were almost playing the result more than the game,” said Indy Eleven Head Coach Martin Rennie. “That’s not how we play and that’s not how we win. I think coming off of a big win the game before was a little bit of a letdown in the second half and something we need to put right.”

The match took 10 minutes or so to pick up the pace, but it did so quickly when Eleven forward Gordon Wild collected in midfield and raced to the top of the area only to his shot high. A minute later OKC forward Villyan Bijev broke out himself, beating a defender to get towards the endline but ultimately firing a shot that Eleven goalkeeper Jordan Farr let slide through his six-yard box without worry.

A Wild set piece delivery nearly paid dividends in the 17th minute, but defender Nedelkjo Malic’s header at the six glanced just wide left, as did shots from the edge of the area by forwards Manuel Arteaga and Cammy Smith in the 20th minute. Moon got in on the shot parade in the 28th minute, running onto a free ball 25 yards out that rose just over the crossbar.

After a flurry of OKC set pieces fell by the wayside around the 35th minute, Wild again found space on a counter opportunity, firing a chance that didn’t miss the near upper left corner by much. It was midfielder Nicky Law’s looping ball over the OKC backline finding Wild once again in the 39th minute, this time a mishit ball bouncing to a fortunate Cochran on his line.

Instead of finishing, it was Wild playing provider to give Indy the opener in the 42nd minute. The German’s in-swinging corner kick swerved to meet Moon at the six, where he thundered home a header to notch his first goal of 2021 – and give Wild his league co-leading third assist of the early season.

The second stanza opened with mostly half chances through the first 15 minutes, but sparked to life in the 63rd minute when Lopez turned on an Indy defender and nearly caught Farr off his line, only to see his chipped effort bounce just wide. Six minutes later Lopez would indeed even for the visitors, his lunging effort to get on the end of defender Robert Coronado’s cross to the six landing just inside the right post to square the proceedings.

Before being subbed off, Wild would have one last go at goal in the 75th minute with a shot from 20 yards that Cochran handled on the bounce. The last quarter hour and four minutes of stoppage elapsed with neither side offering a major threat to break the deadlock, sending both squads home with a share of the spoils.

Tonight’s match was the second of five games in an 18-day stretch for Indy Eleven that continues this Saturday, June 5, versus Memphis 901 FC (WISH-TV, ESPN+ and Exitos Radio 94.3 FM/exitos943.com).  Tickets for the 7:00 p.m. kickoff at Carroll Stadium are now available and can be purchased at indyeleven.com/tickets or by calling 317-685-1100 during regular business hours.