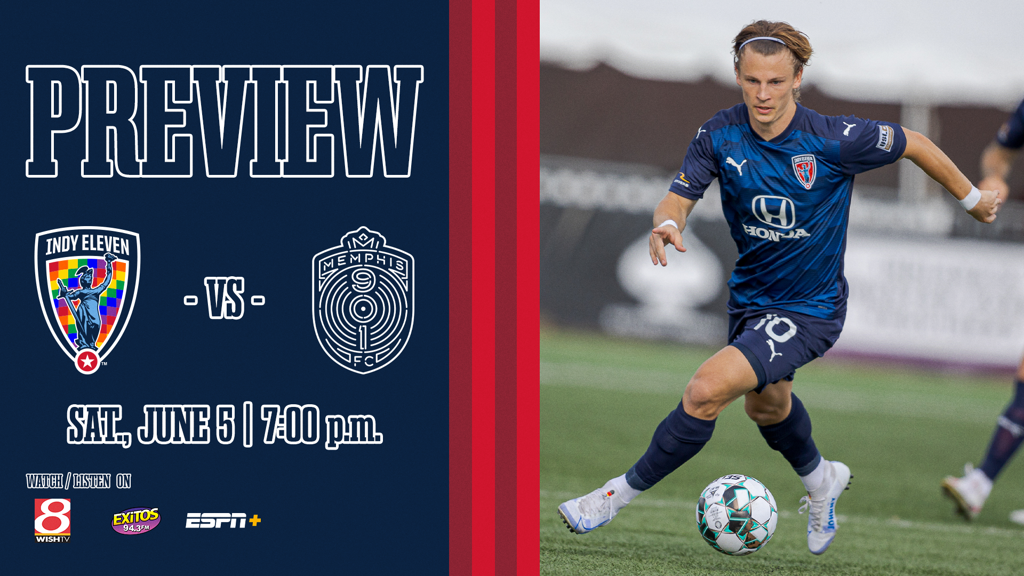 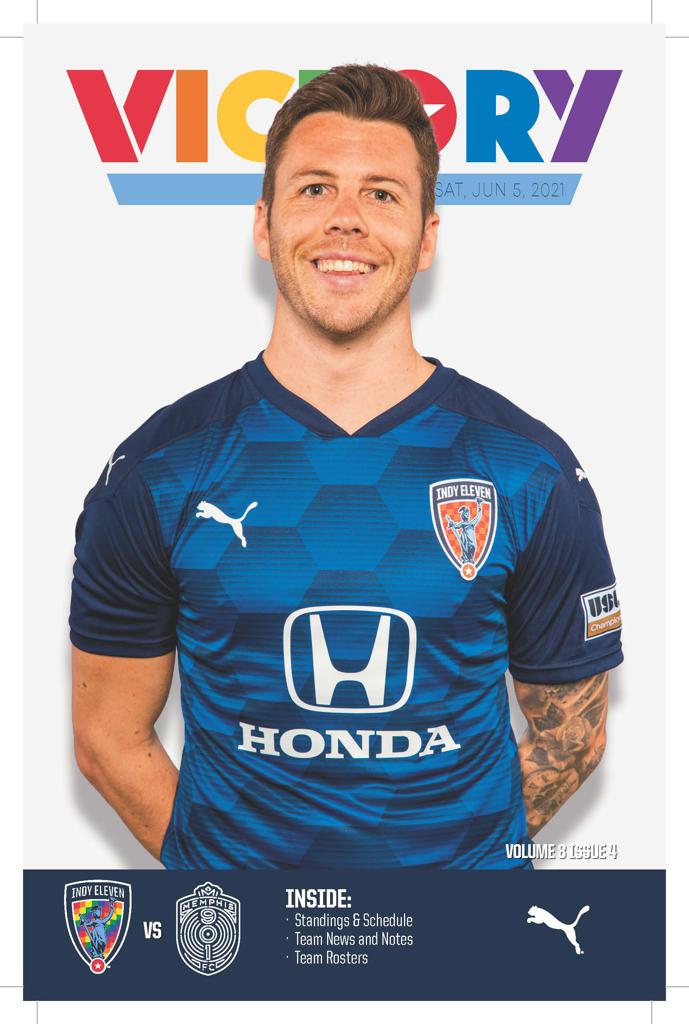 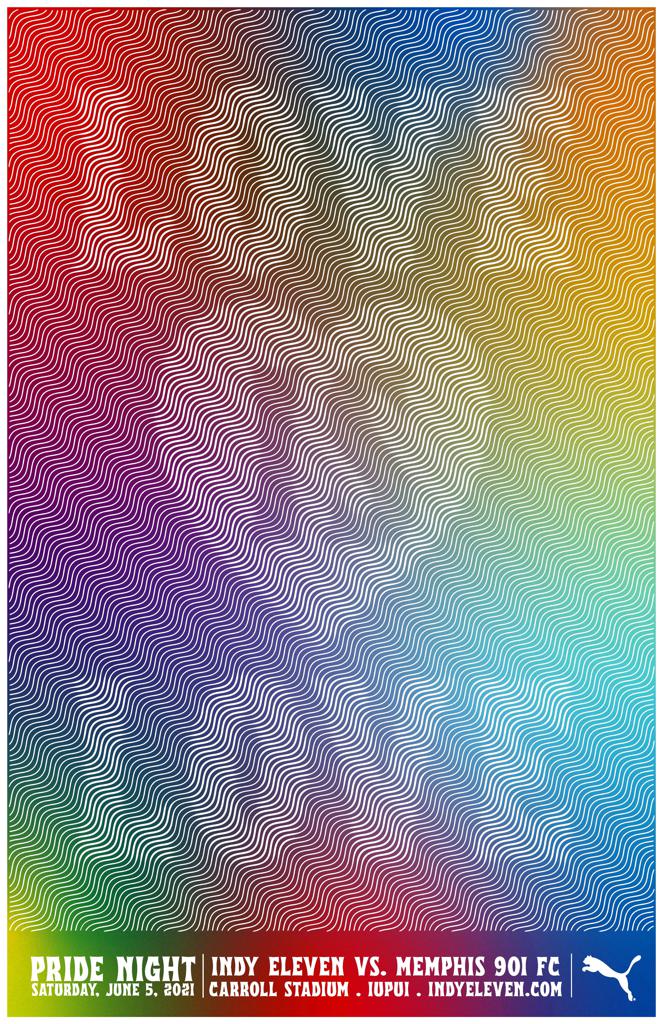 Thanks to our old friend Patrick Cummings for designing the Gameday Poster for this year's annual Pride Night. Be sure to pick yours up at the Customer Service tent on the West Concourse while they last! 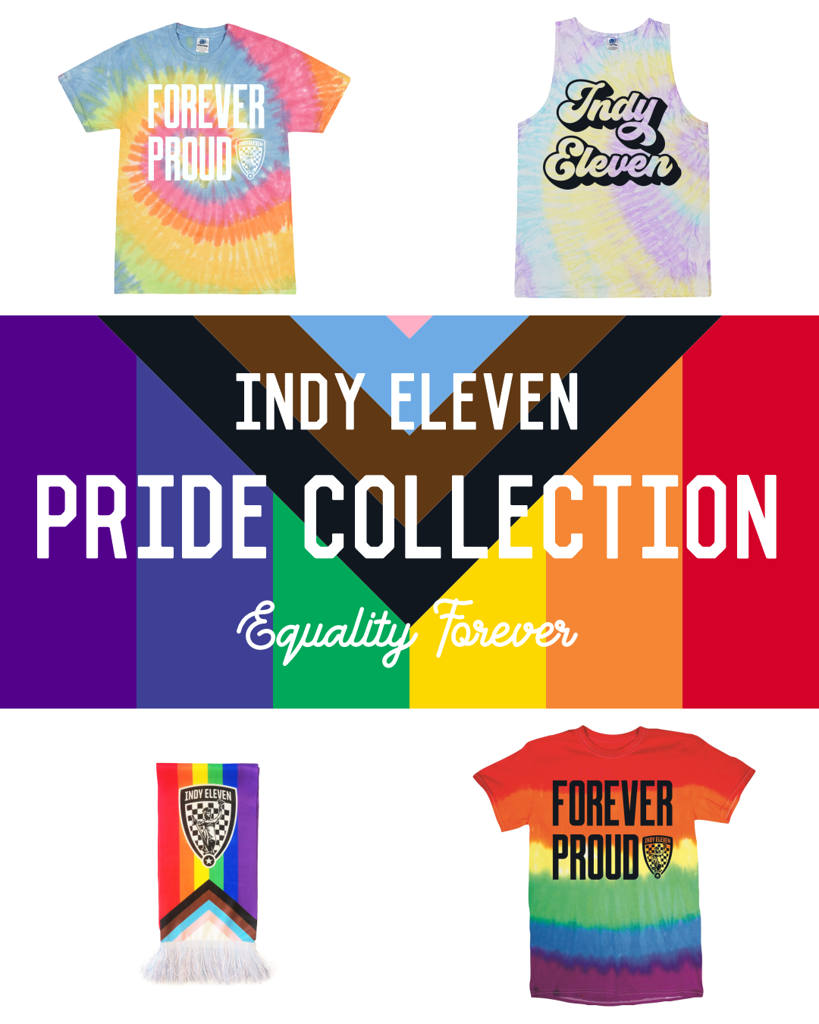 The Indy Eleven Shop will proudly unveil this year's line of Indy Eleven Pride merchandise at Saturday night's match! If you can't make to to The Mike, get your gear at shop.indyeleven.com starting on Sunday.

For the second time in four days, Indy Eleven will play host to a scrappy squad hungry for points and looking for its first win of 2021, this time on Saturday evening when Memphis 901 FC comes to the Circle City for Pride Night at Carroll Stadium.

While Indy Eleven leapt back to the top of the Central Division standings with Wednesday night’s 1-1 draw against OKC Energy FC, Indiana’s Team felt like it left points on the table after surrendering the lead in the 69th minute. In the second match of a four-game, 12-day gauntlet, Head Coach Martin Rennie slightly rotated his lineup, which charged out of the gates in the first half and was unlucky to be up only 1-0 at the half through Nick Moon’s 42nd minute header. Those missed opportunities to pad the lead piled up and eventually came back to the Boys in Blue, who stayed unbeaten for a third straight match (2W-0L-1D) despite being forced to share the spoils.

Indy will be forced into more rotation with the departure of left back Neveal Hackshaw, who left the squad Thursday to report to the Trinidad & Tobago Men’s National Team ahead of the Soca Warriors’ upcoming FIFA World Cup Qualifying matches. With a third game in a week and the longest road trip of the season at El Paso ahead midweek, don’t be surprised to see more squad switches up Rennie’s sleeve in an attempt to keep his lads as fresh as possible on what is slated to be a steamy day in Central Indiana.

While new Memphis Head Coach Ben Pirmann must worry about roster turnover of his own on Saturday, it’s not because of mileage on his squad’s legs, but rather a red card and more international call-ups. Forward Kadeem Dacres scored one of 901 FC’s goals and assisted on the other, and also leads or co-leads the squad in crosses (11), shots (7), and shots on goal (3), but after picking up a second yellow in the 89th minute at OKC last weekend, the veteran Championship striker will sit Saturday night out, putting even more of the attacking burden on his running mate up top, Laurent Kissiedou (1 goal, 7 shots, 2 shots on goal). Another 901 FC first XI fixture in midfielder Dre Fortune has joined Hackshaw with Trinidad & Tobago, while Memphis’ defensive depth will be limited with the absence of Raul Gonzalez as he continues national team duty with Puerto Rico.

Indy Eleven enters Saturday’s match with a spotless record in the short history with Memphis dating back to the Tennessee side’s expansion season of 2019. That year, the Boys in Blue started the series with a 3-0 victory at AutoZone Park on June 8 before equaling that scoreline at Lucas Oil Stadium on October 5.

Last year, Indy Eleven began its regular season on March 7 by finishing the game’s final four goals past American soccer legend Tim Howard in a 4-2 win that marked the first time in the Eleven’s then seven-season history it had posted a victory after going behind multiple goals on the road. That game was the lone “pre-pandemic” match of the start-and-stop 2020 USL Championship season for the Boys in Blue.

Indy Eleven defender Rece Buckmaster will be suiting up against his former side on Saturday night (1G/1A in 14 GP in 2020), while midfielder Mitch Guitar will be going up against the side that loaned him to Memphis just prior to the start of this season (no appearances for Indy in 2020). Indy Eleven also acquired former Memphis striker Cal Jennings this past offseason, but he never saw time for Indiana’s Team after the squad transferred him to MLS’ Los Angeles FC in March.

Wild has been off to nothing less than a, well, “Wild start” with Indiana’s Team. The Leonberg, Germany native and former LA Galaxy man has found early success up top with the Eleven, notching three assists in his first four appearances, including the corner kick service on Nick Moon’s goal against OKC in Wednesday’s 1-1 draw. Wild’s three assists are good enough to tie him for the USL Championship league lead in the category. Wild has yet to net for the Boys in Blue, but it has not been for a lack of effort as his six shots on target also leads the Eleven. Having scored 18 goals across the 2018 & 2019 seasons for Charleston Battery and Loudoun United FC, respectively, he knows how to score at this level, so look for the German to find the back of the net soon enough.

A big question mark in the offseason was who could replace the goal-scoring machine over the last two seasons that was Tyler Pasher. The transfer of the speedy scorer to Houston Dynamo FC of MLS this past offseason raised plenty of questions about where exactly Indy’s goals would come from, with Wild being just part of a handful of attacking players with good experience entering the prime of their careers.  While Wild has yet to score, he is the only player to register any assists thus far for the Eleven, officially helping on three of Indy’s four goals from the run of play – and each to three different players as well. Wild has quickly become a stalwart as the right forward in Rennie’s 3-4-3 attack-minded formation, proving quick and dangerous with the ball at his feet and more than a little fearless, having won 22 duels so far this season. Whether part of the lineup or providing a spark off the bench, look for Wild to continue his swashbuckling ways into the heart of the Memphis defense come Saturday night.

Bright spots have been few and far between for Memphis so far this season, but they can find consistency in Mark Segbers. The University of Wisconsin alum has played every minute for Memphis while doing a little bit of everything so far this campaign. As part of his primary defensive duties, Segbers helped guide Memphis to their first clean sheet of 2021 against OKC last time out. However, don’t let the 25-year-old’s defender listing fool you, as his attacking chops are extremely polished as well – and in much more demand this season. After contributing two assists on five key passes and 23 crosses in 10 games in 2020, Segbers has already tallied one assist (on one of six crossing attempts) and notched a team-high eight key passes in 270 minutes of action.

That said, Segbers will primarily be tasked with containing Indy’s left-sided attacking players, a group likely containing some combination of Manuel Arteaga, Cammy Smith, Patrick Seagrist, or Ayoze - with perhaps a dash of Nicky Law and the afore-mentioned Gordon Wild in doses. Segbers will have to be ready to contain an Eleven attack looking to break out and score a bundle of goals to make up for Wednesday’s missed chances – and continue a torrid pace of 3.33 goals per game scored against Memphis in their brief history (including a four-spot against Segbers & Co. last year). Look for Segbers to be aggressive on defense and add to his eight interceptions while also giving the Indy backline some food for thought as he gets upfield to deliver one of his trademark crosses or a crucial pass to unlock the Eleven.