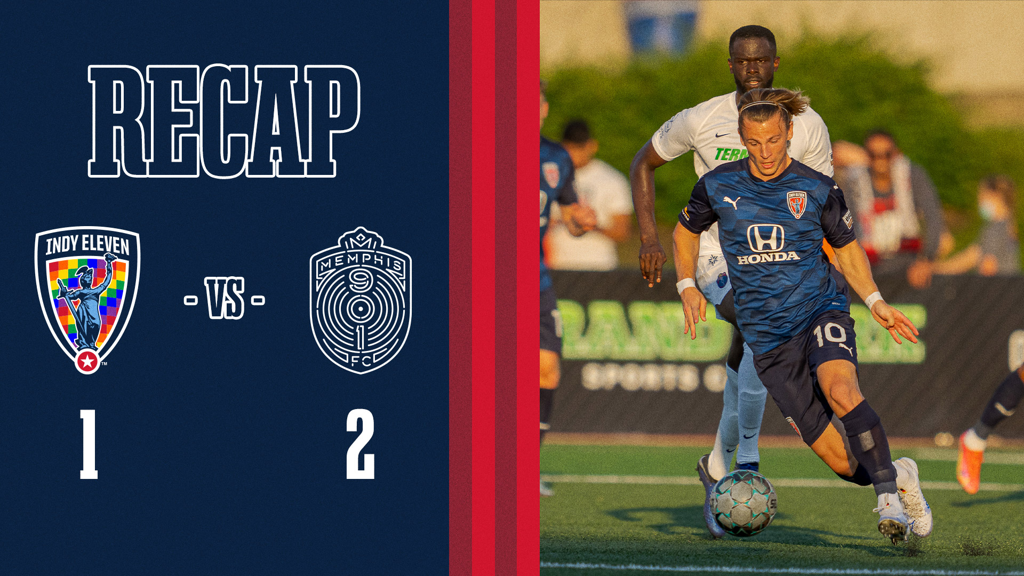 INDIANAPOLIS – Indy Eleven saw its three-game unbeaten streak snapped in surprising, and somewhat controversial, fashion, falling 1-2 against Memphis 901 FC Saturday evening at IUPUI Michael A. Carroll Stadium. Defender Karl Ouimette came off the substitute’s bench to tally deep into second half stoppage time, long after what should have been an early equalizing goal by forward Manuel Arteaga in the 17th minute was not awarded.

“We went for it really hard and got the goal at the end, and to be honest I think if we were given another minute or two, we could’ve gotten another goal because that was the way it was going,” said Indy Eleven Head Coach Martin Rennie. “I feel like tonight we ran out of time and that was disappointing, but it was good to see the fight right to the end and see the goal at the end.”

It was Memphis getting a dream start just over two minutes in. 901 FC midfielder Laurent Kissiedou’s through ball up the middle slipped Michael Salazar past his man and into the Indy area, where the striker slotted low and left past a diving Jordan Farr to put the visitors up before both sides could take a deep breath. Farr would be tested again in the 8th minute by Kyle Murphy’s first-time shot from straight on, doing well to stay alert and cradle the chance on his line.

Despite Memphis continuing to push the pace, it was Indy Eleven that should have moved the scoreboard next, only the referee crew didn’t – or couldn’t – see it that way. Arteaga’s rocket from 25 yards out bounced off the underside of the crossbar and then over the goalline; however, with the assistant referee well off the goalline out past the penalty area, the valid goal was not recognized despite desperate pleas from the home side.

Memphis would take advantage of defensive miscues by the Eleven to double their lead in the 35th minute. After Salazar stripped the ball free in midfield and carried into the area, the Eleven backline recovered well enough to block his initial shot. However, after a missed clearance the ball bounced to Murphy, who calmly slotted his shot from eight yards inside the far-left post. Memphis would hold steady for the final ten minutes of the stanza and carry its shock 2-0 advantage into the halftime break.

Rennie made a trio of changes at the break in an attempt to spark his side, with midfielders Nicky Law and Nick Moon and forward Gordon Wild entering the fray. Wild nearly made an immediate impact with a corner kick less than a minute into the half, but A.J. Cochran’s header was pushed just wide right.

Farr would come up big on the other end in the 56th minute, when Memphis defender Mark Segbers danced into the area on a mazy run and poked a chance from close range, which the Indy netminder went low to poke away from goal. A minute later it was Segbers again creating danger, his cross from inside the area nearly finding Salazar at the far post if not for a deflection on the way by an Indy defender.

Wild had a claim for a point to the spot in the 68th minute after drawing contact inside the Memphis area, but play continued on. In the 75th minute it was midfielder Gershon Koffie attempting a looping shot over Berner that bounced just wide, continuing Indy’s frustrating night in the final third. Farr was called upon again in the 78th minute, coming up big on Kissiedou’s blast from distance, leaping well to get a two-handed parry on the ball.

Indy would keep the pressure up into stoppage time, Moon’s near-post attempt three minutes forcing Berner into action. Another Wild service on a corner would finally pay off in the sixth minute of stoppage time, the ball deflecting off of Koffie before Ouimette sent it through traffic inside the six and into the roof of the net to set up a frantic finish. The comeback would run out of time, however, sending the Boys in Blue to a disappointing home result.

The Boys in Blue return home on Tuesday, June 15, when they’ll play host to Pittsburgh Riverhounds SC for a rare 8:00 p.m. ET kickoff at “The Mike”, tickets for which are available by visiting at indyeleven.com/tickets or by calling 371-685-1100 during regular business hours.  The lone home national television broadcast of 2021 for Indy Eleven will be featured on ESPN Deportes and can also be followed locally on WISH-TV and Exitos Radio 94.3 FM/exitos943.com.