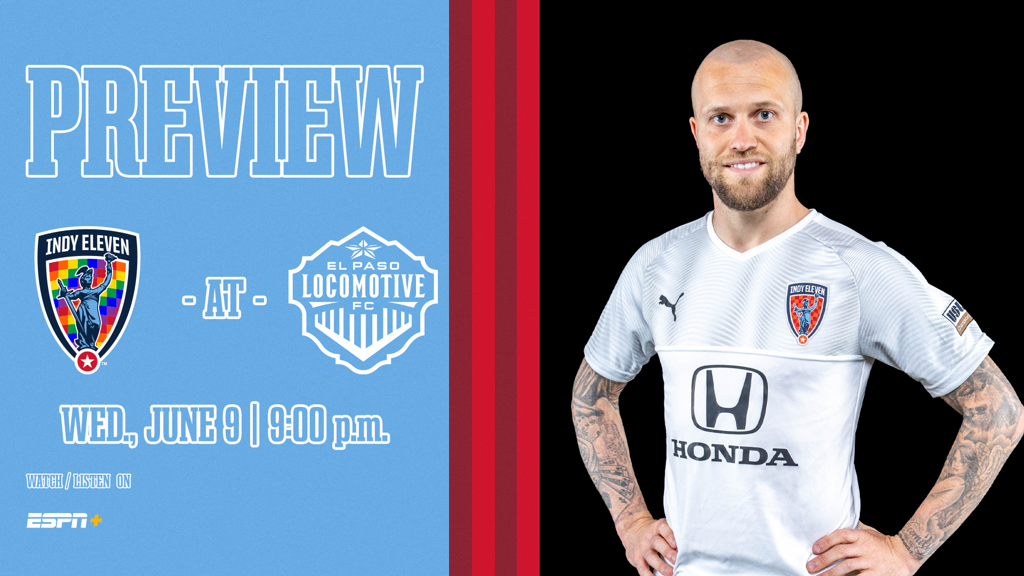 After having its three-game undefeated streak snapped four days prior, Indy Eleven will look to rebound on the road this Wednesday for a rare 9:00 p.m. ET kickoff in its first-ever meeting with Western Conference side El Paso Locomotive FC.

Indiana’s Team will be looking for a bounce back win in its fourth match in 12 days and improve its Central Division standing after a shock and somewhat controversial 1-2 loss against Memphis 901 FC last Saturday at IUPUI Michael A. Carroll Stadium. First half goals from 901 FC’s Michael Salazar and Kyle Murphy in the 3rd and 35th minutes, respectively, gifted the visitors their first win of the season. Eleven defender Karl Ouimette managed to keep Memphis goaltender John Berner from registering his second clean sheet of the season, hammering a shot in the back of the net deep into second half stoppage time, long after what should have been an early equalizing goal by forward Manuel Arteaga in the 17th minute was not awarded.

Heading into the tail end of a five-game, 18-day stretch and still without defender Neveal Hackshaw, who left the squad last Thursday to report to the Trinidad & Tobago Men’s National Team camp ahead of a pair of FIFA World Cup Qualifying matches, Indy will likely be forced into more rotation in an attempt to keep fresh legs for the next two matches. With temperatures projected to be in the mid-90’s around kickoff, Indy Eleven Head Coach Martin Rennie will be looking to put a heavy emphasis on recovery efforts leading up to the match.

Coming off an intrastate 1-0 rivalry win at Austin Bold FC six days prior, Locomotive FC will get its first taste of schedule congestion this Wednesday, kicking off a spell of three games in 10 days that may force the Texan side to rotate some of its key players. Head Coach Mark Lowry has already experimented with squad rotation following his team’s scoreless draw against Sporting Kansas City II on May 30, making five changes to his starting lineup last time out in Austin. The changes proved fruitful, as 17-year-old Diego Luna netted his first professional goal and the game-winner in his first start, assisted by former Indy Eleven defender Macauley King (more on him below). Though El Paso is currently tied for the lowest goal production across the Championship, the team has put up one of best defenses heading into Week 8, conceding a league-best one goal in its first four matches, a stat Indy Eleven’s offense will look to disrupt in the midweek fixture.

While Indy Eleven has made previous trips to Texas during its North American Soccer League era to face off against San Antonio Scorpions (2014-15), this will mark the first match-up against El Paso Locomotive in both team’s franchise histories.

King singed his first professional contract with Indy Eleven ahead of its 2019 USL Championship season after completing his collegiate career at Young Harris College. The Englishman went on to make 22 appearances (17 starts), tallying one goal, three assists and created 10 chances to help Indy reach the 2019 USL Championship Eastern Conference Final before eventually heading to El Paso in August 2020.

Nicky Law has been, well, laying down the law in the midfield for Indiana’s Team so far this season. The English import has started his first season stateside strong after coming over from England’s SkyBet League Two side Exeter City FC. Law has added a major veteran presence to Indy Eleven’s midfield, having made over 500 career appearances across Europe, including top-flight stops with English Premier League side Sheffield United and Scottish Premiership’s Rangers F.C. Learn more about Law’s career by reading his player bio: IndyEleven.com/Nicky-Law.

Law has slotted into a key midfielder role where he has become a mainstay and a vocal leader, leading every Indy Eleven player not named Jordan Farr in minutes on the pitch at 494 in six appearances (four starts) heading into Week 8.

Looking forward to El Paso, Law will need to continue his work as a master distributor in the midfield.  The 33-year-old has quickly become a crucial component in Indy’s offensive build, leading his teammates, as well as the entire Eastern Conference, with a jaw-dropping 16 chances created since his debut. Not only does Law lead the Eleven in key passes, but he also leads in total passes with 309 to his name, averaging nearly 56 passes per game thus far. A key cog in the engine room, it’s hard to believe that Law has yet to record an assist or a goal on the season, but there would be no better time to notch his first tally in either column than against an El Paso defense that is as strong as any defense in the USL Championship.

Ketterer has returned to the Lone Star State after embarking on a brief stint with Major League Soccer side Portland Timbers. The 27-year-old keeper found himself with big shoes to fill while in the Rose City, where he was brought in on an emergency loan after injuries to three of Timbers’ four goalkeepers. He kept two clean sheets in three matches and brought home wins against the San Jose Earthquakes and LA Galaxy, before falling to the Philadelphia Union. Ketterer was returned to El Paso on June 2nd and will look to replace Adrián Zendejas between the sticks this Wednesday against the Boys in Blue.

The Racine, Wisconsin native has made one appearance for El Paso so far this season, a 1-1 draw in the team’s season opener at home against New Mexico United. Last season, Ketterer helped guide El Paso to the top of the Group C table – which was composed of New Mexico United, Colorado Springs Switchbacks and Real Monarchs SLC - while maintaining a Western Conference-best eight clean sheets in 16 regular season contests. The Bradley University alum also helped lead El Paso to the Western Conference Final, before ultimately falling to Phoenix Rising in penalties. Ketterer looks to lead a defense that has allowed only a league-best one goal in four games against an Indy Eleven squad looking to capitalize on key moments.