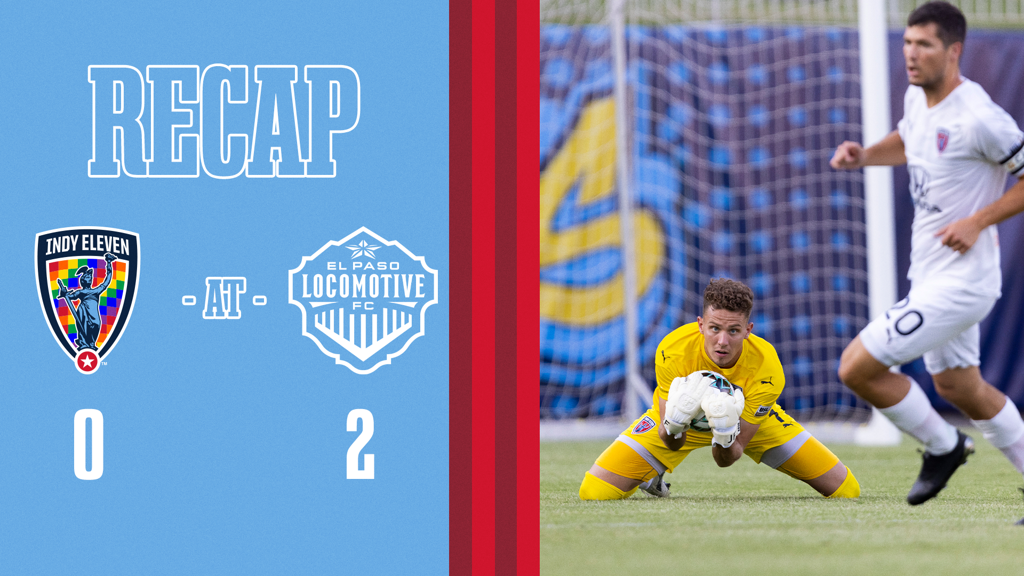 “It was a hard game and we didn’t start well. It was the worst possible start giving away an early goal. That was very frustrating because we worked on making sure we defended those situations well,” said Indy Eleven Head Coach Martin Rennie. “We lost another one but kept pushing, working and trying to get goals out of a couple of chances. It seems like after this stretch of games that we didn’t have that extra energy we needed to get the goal.”

It was Locomotive FC getting the early lead in the second minute of the match. El Paso defender and former Boys in Blue Macauley King lobbed his cross from the right flank into the middle of Indy’s penalty area to an unmarked Nick Ross, who took a touch and hammered his volley off the top of the crossbar and behind Jordan Farr for the first goal of the evening. The hosts nearly doubled their lead five minutes later when another cross from King connected with Luis Solignac as he slipped between Indy’s backline, nodding a header near the spot which luckily rebounded off the far-left post for Farr to quickly collect.

El Paso continued to pressure Indy’s defenders early in the first half with Solignac getting another look at goal in the 16th minute. The Argentinian gained possession near the centerline and launched into a bit of give-and-go play with teammate – and Indy Eleven Class of 2014 – Dylan Mares as the striking pair charged towards goal, with Eleven defender Karl Ouimette in tow. Farr did well in attempting to smother the play, but a slight shove from Ouimette sent Solignac leaping over the ‘keeper, grazing his forehead with his cleats and halting the play. After a quick check Farr was cleared to continue play.

Indiana’s Team found their first dangerous moment of the evening in the 26th minute when midfielder Gershon Koffie slipped a pass through the middle to Jordan Hamilton, with the forward laying the ball off to Cammy Smith in El Paso’s attacking third. The Scotsman took a touch and tipped the ball into Locomotive’s 12-yard box creating an opportunity for Hamilton, but goaltender Logan Ketterer charged off his line and collected before Hamilton could get a shot off.

El Paso had two more glances at goal to close out the first half. Eder Borelli came dashing down the left flank and sent a cross from the byline through the middle Indy’s area. King nodded the ball down which Farr was to collect. The clock eclipsed into first-half stoppage time before El Paso had another opportunity withyet another cross from the left landing in a scrum of players just outside the goal. Solignac came close to getting his first goal of the night, but not before the ball was cleared out of danger by an Indy Eleven defender.

El Paso entered the second stanza swinging, with Ross collecting another on-target attempt a minute after the whistle. Solignac volleyed a pass back to Ross inside Indy’s area for a one-touch shot, Farr quickly diving down for the save. The home side’s persistence would pay off, finding their second goal of the night by way of forward Diego Luna in the 49th minute. A string of 1-2 passes from Solignac fed the ball to the 17-year-old, whose shot from distance took an unfortunate deflection off an Indy defender’s boot and moved just out Farr’s reach and over the line near the right post.

Farr was tested once again in the 55th minute when Luna struck from 15 yard out, the attempt bouncing comfortably into the ‘keeper’s gloves. Eleven forward Gordon Wild had his first look at goal two minutes later after a shove from behind on Hamilton earned a free kick opportunity outside ELP’s box for Indy Eleven – and a yellow card for El Paso’s Bryam Rebellon. Midfielder Nicky Law faked forward and back with Wild ultimately blasting the dead ball on frame from 25 yards out, forcing Ketterer into a falling save.

El Paso returned fire in the 60th minute – Mares’ shot from distance jumping out of Farr’s grasp and leaving the goaltender to scramble andto collect. Luna returned once again in the 63rd minute for yet another shot from just outside the box, Farr stopping the attempt early with a massive stop near the edge of the box.

Wild looked to make his mark on the match once again in the 65th minute. A long ball from the back found the German outside of ELP’s box, a light touch brought the pass down and beat past two Locomotive FC defenders for a shot on goal, but Ketterer palmed the attempt down to keep Indy off the board.

Both sides continued searching for goal scoring opportunities throughout the remainder of the half, but neither team could find quality chances as the fourth official blew the final whistle after four minutes of stoppage time.

The Boys in Blue return home to finish its stretch of five games in 18 days on Tuesday, June 15, when they’ll play host to Pittsburgh Riverhounds SC for a rare 8:00 p.m. ET kickoff at “The Mike”, tickets for which are available by visiting at indyeleven.com/tickets or by calling 371-685-1100 during regular business hours.  The lone home national television broadcast of 2021 for Indy Eleven will be featured on ESPN Deportes and can also be followed locally on WISH-TV and Exitos Radio 94.3 FM/exitos943.com.