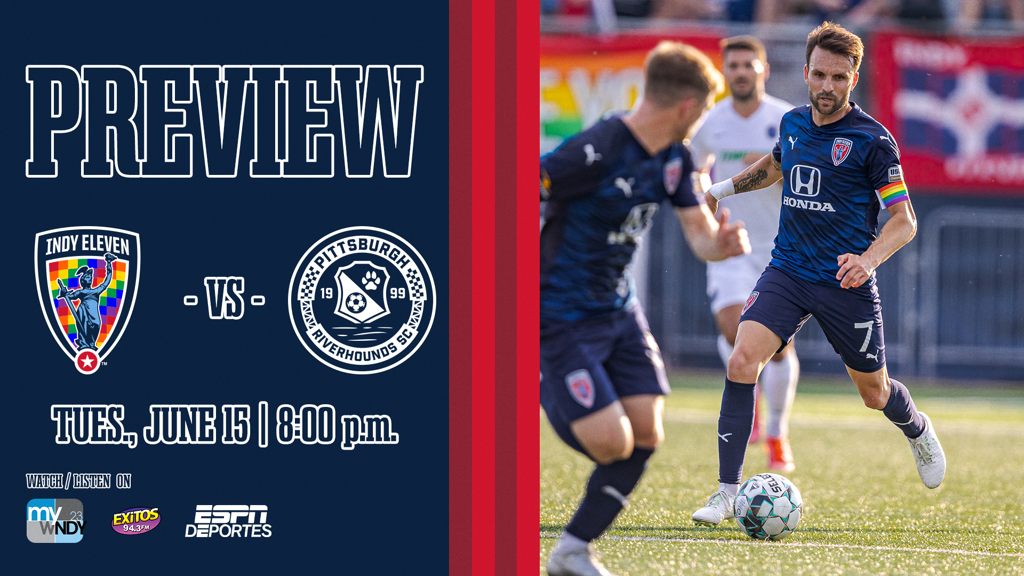 Indy Eleven will look to return to winning ways when the team heads Back Home Again this Tuesday for a rare 8:00 p.m. ET kickoff at IUPUI Michael A. Carroll Stadium in its lone matchup against Eastern Conference foes Pittsburgh Riverhounds SC.

The Boys in Blue will conclude their grueling five-game, 18-day gauntlet after suffering a second consecutive  defeat, the recent result coming as a 2-0 loss at El Paso Locomotive FC last Wednesday at Southwest University Park. A goal out of the gate in the 2nd minute from El Paso’s Nick Ross had Indy Eleven chasing the game early under the hot Texas sun. The home side doubled their lead in the 49th minute by way of 17-year-old Diego Luna, the youngster getting a lucky deflection off an Indy defender’s boot that pushed the attempt just out of goalkeeper Jordan Farr’s diving reach. Score aside, Farr undoubtedly had a strong outing after putting up six saves throughout the midweek fixture, tying San Diego ‘keeper Trey Muse and Tacoma Defiance’s Spencer Richey for second most saves across the league in Week 8.

With a five-day buffer between the last fixture and the next, the Eleven roster will have a few extra days to focus on recovery efforts. Rotation in the lineup has been a major component for Head Coach Martin Rennie’s gameplan over the last handful of matches, but with the squad getting a few extra days to catch their breath, expect to see fresher legs returning to the Starting XI. Indy’s back line will receive an extra boost with defender Neveal Hackshaw returning from Trinidad & Tobago National Team duty. The 25-year-old has been absent from Indy’s roster for the last two matches, having joined the Soca Warriors for a pair of FIFA World Cup Qualifiers against the Bahamas and Saint Kitts and Nevis on June 5 and 8, respectively.

Pittsburgh secured a point Saturday evening at home following a 1-1 draw in the team’s first-ever meeting against The Miami FC. An opening goal from leading scorer forward Russell Cicerone in the 9th minute was the first that the Riverhounds had netted at home in 2021, having fell in 1-0 fixtures at Highmark Stadium against Charlotte Independence on May 22 and Austin Bold on June 6. However, a strike from Miami’s Christiano François three minutes into first half stoppage time leveled the game, the match eventually ending in a stalemate and the points split. While Riverhounds may not have found their scoring boots on home turf, the team has been heating up on the road with a 2W-1D-1L away record, netting seven goals and conceding three. With just three days’ rest heading into Tuesday’s contest, Head Coach Bob Lilley may be eyeing the potential for some squad rotation to take on an Indy side with fresher legs.

Indy Eleven enters this Tuesday leading its series against Pittsburgh Riverhounds SC dating back to Indy’s inaugural USL Championship season in 2018. That season, Indy battled the Riverhounds to a scoreless draw at Highmark Stadium on May 11, followed by a 2-2 stunner at Lucas Oil Stadium on August 2018, but eventually ended the 2018 season falling 3-2 back on the road in September.

The 2019 series started in Indy’s favor as the team secured a 2-1 win at Lucas Oil Stadium on June 1 before falling 3-0 at Pittsburgh on September 28.

The scales tipped in Indy’s favor in 2020 with the Boys in Blue with tallying wins in both contests. Former Indy Eleven forward Tyler Pasher stunned the league with a world-class strike that found the back of the net for the game-winner in the seventh minute of second half stoppage time to win 1-0 on the road on July 22. Pasher was the hero once again on August 15, scoring the game’s lone goal and secured three points in front of a home crowd at LOS.

Oh captain, my captain! Named Captain prior to kicking off the 2021 USL Championship season, Ayoze has been a man after Boys in Blue fans hearts since joining the team in 2018. The Spaniard came over from former NASL rivals New York Cosmos and hasn’t looked back since, aging like a fine Pinot Noir over the last four seasons in the Circle City. However, there is no denying Ayoze is on the wrong side of 30, having turned 35-years old last November (Happy belated Birthday, Ayo). Though he’s only managed 176 minutes across four games this season, the Eleven’s elder statesman has been an asset when marshalling the left flank.

A strength to Ayoze’s game is his passing ability as he currently leads his teammates with an average of almost 59 (58.8, to be exact) passes per 90 minutes. The winger’s creative ability is also akin to a Picasso painting, skillfully picking passes through the gaps in any opponents’ defense. Ayoze only has two key passes and has yet to tally an assist so far on the year in limited action, so look for that number to improve as Indy’s team captain gets into midseason form and especially against an Eastern Conference rival in the likes of Pittsburgh.

Not only is Ayoze a looming threat in the active field of play, but he also often dangerous from set pieces as well. The Puerto de la Cruz, Spain native often finds himself whipping in corners, sending in free kicks or stepping up to the penalty spot. Chances from dead ball situations can be dangerous, especially for a team who scored five of their seven goals from set pieces, with three of those coming from corner service and two from the penalty spot. Ayoze did have the opportunity to slot home a penalty against Tulsa, but was unable to convert as his shot rung off the crossbar. In the event of a penalty, look for the captain to step up and redeem himself for the extremely rare miss earlier this season.

Pittsburgh finds themselves battling through a rocky start to the season, but Jordan Dover has been nothing but consistent in their backline over the last four seasons. The Guyana international has featured in all seven games so far for the Riverhounds, five of those matches in his side’s Starting XI. Speaking of appearances, Dover hit a career milestone of 100 USL Championship appearances in Saturday’s match against The Miami FC. Dover finds success with his passing abilities as he is among one of the leading playmakers for this squad with nine chances created. Despite his best attempts to play playmaker, Dover has yet to register an assist this season.

Dover will no doubt play a key role in a Pittsburgh offense that tends to score in bunches or not at all. Dover has a knack for stepping in front of passes with nine interceptions so far this season. Be on the look for the Pittsburgh wideman to take advantage of any loose passes from the Eleven and spark a counterattack that could have game changing implications.