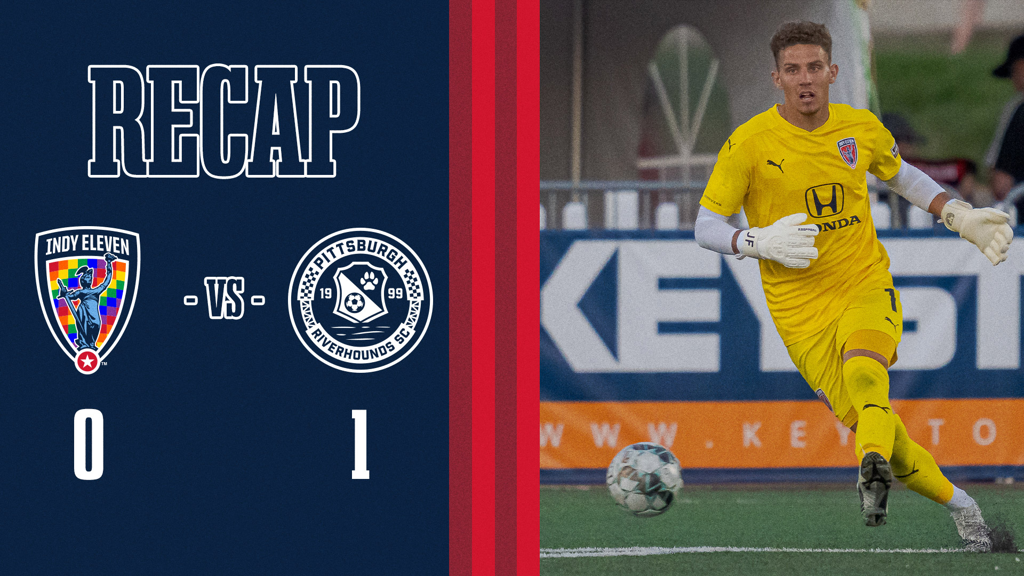 INDIANAPOLIS – Another chapter in the tight, hard-nosed series between Indy Eleven and Pittsburgh Riverhounds SC unfolded this evening at IUPUI Michael A. Carroll Stadium, with Pittsburgh this time pulling out a 1-0 victory over Indiana’s Team. Despite holding a man advantage over the final 30-plus minutes of the second half, the Eleven could not overcome a packed-in Riverhounds side and a late first half goal by forward Thomas Williamson.

While the opening of the match was anything but ragged, no chances of note came about for either side until Eleven forward Gordon Wild struck the right post off a 20-yard free kick opportunity in the 25th minute. The German striker set up the chance himself with a lengthy run into the final third that was cut down by Riverhounds SC captain Daniel Griffin, who drew the first of an eventual six yellow cards.

Minutes after Riverhounds defender Jalen Robinson provided danger on a header pushed high off a corner kick, a similar free kick opportunity to Indy Eleven’s in the 36th minute would see the visitors take the lead. It was Williamson stepping up to the set piece and banging a driven shot off the end of the Indy wall, the deflection bouncing inside the right post and past stranded Eleven ‘keeper Jordan Farr to move the scoreboard first.

While Pittsburgh had controlled the chances through the first half, the script shifted in the second 45 minutes, thanks in large part to a pair of yellow cards shown to Riverhounds SC defender Jelani Peters in the 59th and 62nd minutes that put Indy Eleven a man up for the duration of the match.

Pittsburgh did well to flood the gates of its defensive third with numbers, but their dam nearly broke in the 85th minute via an apparent finish by Eleven forward Manuel Arteaga that was correctly negated by the offside flag. From there Riverhounds SC managed the game out by repelling a flurry of crosses pumped inside the penalty area to secure the full three points and leave the Eleven winless in its last three times out at Carroll Stadium.

The Boys in Blue will take to the road for their next two contests, starting this Sunday, June 20, at Sporting Kansas City II (5:00 p.m. ET, live on ESPN+), and continuing at Louisville City FC next Saturday, June 26 (live on MyINDY-TV 23 & ESPN+).

Indiana’s Team will then return home on Saturday, July 3, to take on Birmingham Legion FC on “Indy-Pendence Night” at Carroll Stadium. Tickets for the 7:00 p.m. ET kickoff are limited but still available and can be secured by visiting indyeleven.com/tickets or by calling 317-685-1100 during regular business hours.  Fans who can’t make it to “The Mike” can follow the action on WISH-TV 8, ESPN+, Exitos Radio 94.3 FM/exitos943.com, and the @IndyElevenLive Twitter feed, presented by Central Indiana Honda Dealers.