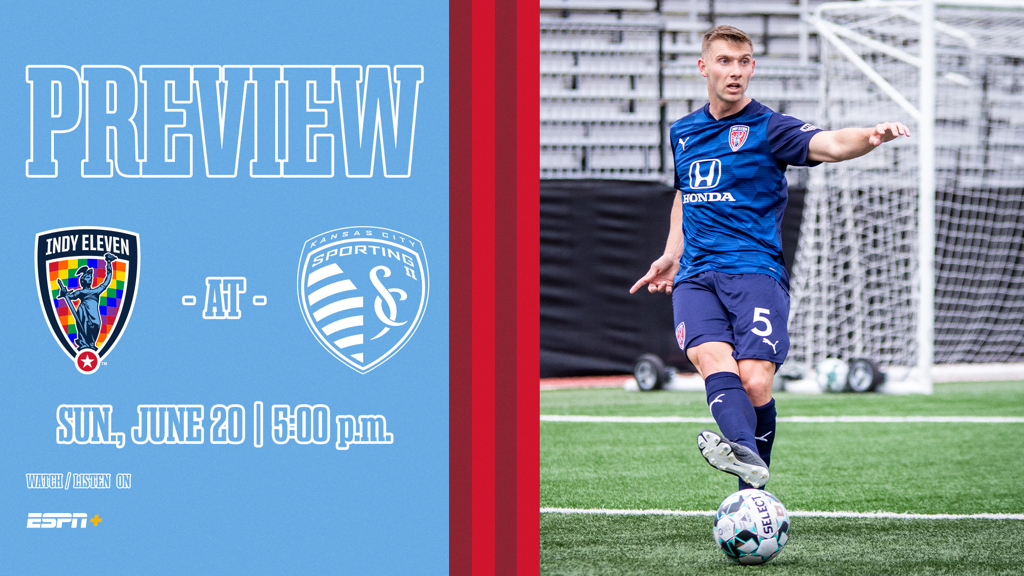 No two ways about it, Indy Eleven heads into Sunday away tilt at Sporting KC II with more questions than answers at the moment after a tumultuous start to June. Since entering the month atop the Central Division standings, a disappointing home draw on June 2 vs. OKC Energy FC and three consecutive losses in an 11-day span to follow led to Wednesday’s mutual moving on of now former Head Coach Martin Rennie. That shuffling leaves Assistant Coaches Max Rogers (who currently carries the Interim Head Coach tag), Phil Presser, and Andy Swift to lead the Boys in Blue into battle in the short term while the search for a permanent replacement picks up steam.

Despite the recent struggles, the Boys in Blue still sit in decent shape in the middle of the Central table – and with plenty of time to right their ship as they enter the “second quarter” of their Championship campaign. Perhaps the best way to hit the “reset button” at the moment is by facing the team against which it had its best showing thus far – and that happens to be the case this weekend. Indiana’s Team put together its most complete performance of the early season in the May 22nd meeting at Carroll Stadium, the 2-0 win featuring a high-flying attack (including the first rollout of the Jordan Hamilton-Manuel Arteaga-Gordon Wild troika up top) and energetic, pressing defense all over the field that stymied Sporting all evening long.

It’s the attack that has been Indy’s Achilles heel during its current four-game winless drought, having been shut out in its last two outings and scoring only once in its last seven halves of action. The last three times out versus Memphis, at El Paso, and most recently Wednesday night against Pittsburgh, it has been the opposition that has started on stronger footing when it comes to creating chances, a trend that will be imperative for Indiana’s Team to reverse if its wants to start a new era off in strong fashion.

The start of June also seemed to mark a turning point for SKC II, only in the opposite direction. After starting the season by going winless (0W-3L-3D) and scoring just twice in its first six outings, the floodgates have opened for the Kansans, who have bagged nine goals in their three games this month. While that scoring deluge has only resulted in one victory – its first of the season via a 4-1 home thrashing of FC Tulsa on June 2 – that triumph and the two results on the road that followed against current third-place sharers Atlanta United 2 (2-2 D) and Tulsa (3-4 L) have signaled a shift in how one might look to take on the Kansas side when compared to the two sides’ first affair just under a month ago.

The all-time series has largely titled towards Indiana’s Team, including a 3-1 victory in their only meeting at Children’s Mercy Park on April 15, 2019, that started their competitive ledger. The last six matches have all taken place in the Circle City, including a split of the four contests held at Lucas Oil Stadium during the revamped 2020 season, three featuring 2-1 results in addition to a 0-1 loss by Indy on Aug. 1 that snapped the second-longest home undefeated (28 games) and winning (11 games) streaks in league history.

The first meeting of 2021 marked the Eleven’s only home win to date in its first five games upon returning to Carroll Stadium, Gordon Wild assisting on a pair of second half goals by Jordan Hamilton and Manuel Arteaga to spark the side to a convincing 2-0 victory.

We aren’t going to lie to you folks, with an interim regime in place it’s a bit of a crapshoot as to how the Eleven will line up against Sporting Kansas City II on Father’s Day. There is also no denying it was a bleak result Tuesday night, but that a bright spot was the play of our newest defensive Swiss Army knife (and former front office intern) Jared Timmer. The pride of Hudsonville, Michigan and Butler University stepped into a defensive midfield role for thie first time in an Indy uniform to partner centrally with Nicky Law against Pittsburgh – but it is indeed a role Timmer is familiar with. “I’ve played defensive mid just about my whole life all through college, and I really just transitioned to a center back/right center back role turning into a professional,” Timmer explained after Tuesday’s match.

The second-year pro’s experience was obvious, as he commanded the holding midfield role with integrity and panache. The former corporate partnerships intern found a way to partner with his teammates, completing 71 passes, good for second most only behind Man of the Match Neveal Hackshaw. Not only was he a strong distributor, but he was strong taking away the ball as well, winning ten duels to bring his season total to twenty-eight.

While defensive statistics aren’t always the most eye-catching, it’s been the Eleven’s defense that has kept them in games – and Timmer has played a solid role on that side of the ball in his six appearances to date. With his versatility to play in both a defensive midfield and back line capacity, it’s hard to imagine many starting XI’s for the Boys in Blue going forward that don’t include Timmer as a defensive focal point – especially this Sunday with SKC II’s attack in high gear as of late.

Tyler Freeman is another of the many promising players that have come through the Sporting Kansas City Academy. Currently at the ripe old age of 18, he’s already in his third season featuring for SKCII after signing a homegrown professional contract with the squad’s MLS parent club at 15 after impressing with their U-17 Academy outfit. If the name sounds familiar to Eleven fans, that may be because Freeman has goalscoring experience against the Boys in Blue, netting an 88th minute consolation goal in SKCII’s 1-2 defeat at Lucas Oil last September. He enters Sunday’s match on the heels of an absolutely wild game against FC Tulsa on Wednesday, when he netted twice after coming on as a sub in the 76th minute to nearly spur a comeback in their eventual 3-4 defeat.

The SKCII forward has a knack for scoring late, with all of three of his goals this season coming in the 84th minute or later. Despite playing just 33% of the team’s available minutes (264 of 810), Freeman’s three goals are good for the SKCII team lead and has him on an impressive goal-per-game pace early on (averaging one goal per 88 minutes, to be exact). While he’s on the field to finish chances, he can create them as well, though none of his four chances created have been converted into assists. Whether in the first XI or off the bench, expect the young gun to bring speed, a surprising amount of experience, and a knack for late magic to a match where Indy’s backline will need to focus for a full 90 (and then some) to try and get its season back on track.