RECAP | Eleven Back in Win Column with Away Triumph 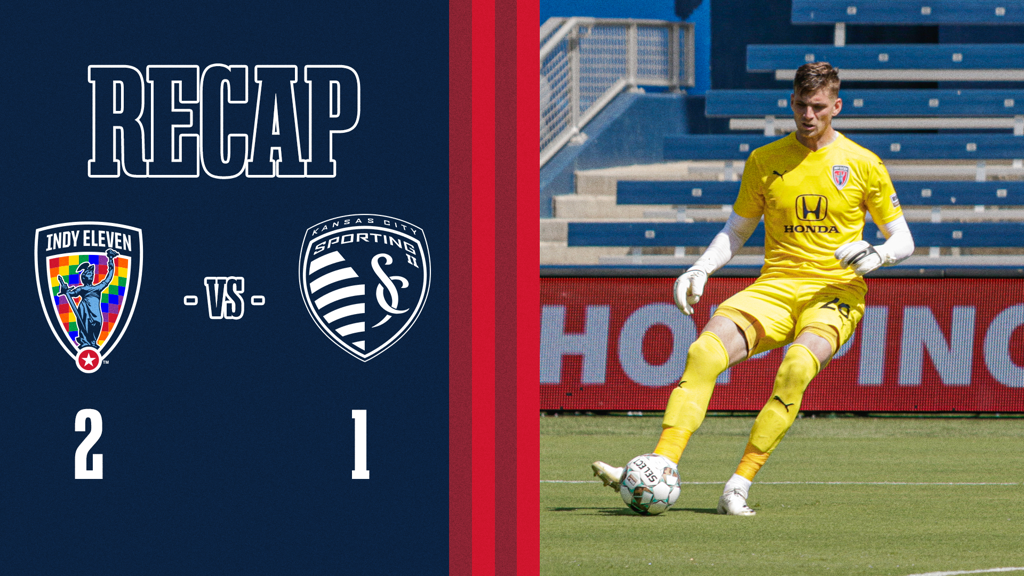 Interim Indy Eleven Head Coach Max Rogers took charge midweek of a squad desperately in need of waking up its attack, and it was midfielders Nicky Law and Gordon Wild who obliged, scoring on either side of the half to get the cogs of the offense turning.

It would be Indy that took the first real chance of the game in the sixth minute, when Manuel Arteaga went streaking down the right side before cutting into the box. The forward’s shot took an awkward deflection off an SKCII defender and spiraled over goalkeeper John Pulskamp before bouncing just wide of goal. Arteaga nearly broke free in the ninth minute before he was closed down just outside the box, forcing his shot to go well wide.

Law saw yellow in the 12th minute for a law-breaking challenge to stop a SKC II counter-attack, but it was his goal in the 19th minute that opened the scoring at Children’s Mercy Park. After collecting a deflection at midfield, Wild sprinted forward to capitalize on the mistake and did well to play Ayoze into the left side of the area. The Indy captain’s beautiful first-time cross beat Pulskamp and found an in-stride Law, who slotted home easily with a low right footed shot. It was Law’s first goal since joining the Boys in Blue this past winter and his first ever goal in the United States after a 16-year career in the United Kingdom.

The Eleven’s goal was as glorious as its lead was brief, as SKC II forward Enoch Mushagalusa found space out wide in the 20th minute, then managed to find his way past an Eleven defender on the endline. Mushagalusa cut inside and took a low shot that snuck through traffic and found the back corner of the net past ‘keeper Bobby Edwards, who made his first appearance for the Eleven in place of an injured Jordan Farr.

Two of Indy Eleven’s five first half corners nearly struck paydirt in the following quarter-hour, but Karl Ouimette’s header and Neveal Hackshaw’s poked redirection, both from the edge of the six, were stopped well by reaction saves from Pulskamp. It was another set piece in the 36th minute that nearly found the back of the net for Indy, but Arteaga steered Wild’s swerving free kick from 30 yards out just wide.

Sporting ended the half with a flurry of chances, but Edwards was up to the challenge, starting with a pair of stops on Rojay Smith in the 42nd and 45th minutes – the first a spectacular, full-diving effort on the Jamaican’s shot from distance. Edwards could do nothing about the following two chances deep into an eventual 11 minutes of stoppage time, but Tyler Freeman shanked his effort just yards from goal and Mushagalusa hammered a shot from 20 yards off the woodwork. SKC II would have one final look just before the halftime whistle when Freeman’s cross found Jahon Rad, but it was Edwards to the rescue again with a diving stop to deprive SKCII of the lead.

It wouldn't take long after the break for Indy to grab their second, with Arteaga slipping a beautiful pass through the SKCII backline to spring Wild in the 50th minute. The German danced to round the ‘keeper and, despite setting up a tight angle, managed to roll it into the back of the net to give the Boys in Blue the 2-1 lead. The finish marked Wild’s first goal since 2019 and his first as a member of the Eleven to pair with his three assists on the season. The Boys in Blue almost struck again in the 56th minute when Hacksaw laid off for Arteaga, but Pulskamp made a third mind-bending save of the match, contorting his body to keep SKC’s deficit at one.

Edwards went pound-for-pound with Pulskamp, denying Mushagalusa his second goal in the 59th minute after the Congolese striker received an impressive through ball from Jacob Davis. While the chances continued into the final half-hour, none would majorly threaten goal until the 83rd minute, Smith once again knocking on the door with a shot from distance that barely missed wide left. While seven minutes of stoppage would be signaled, SKC II would take it down to the wire with one more solid chance in the 98th minute through Bailey Sparks. The SKC Academy project found Kayden Pierre’s cross in heavy traffic and redirected from inside the six, but it was Edwards making a remarkable save on his line to deny the last-gasp attempt, his eighth save of the afternoon preserving all three points for Indiana’s Team.

After snapping their winless streak at four games, Indy Eleven will head across the Ohio River for the next chapter in the LIPAFC rivalry this Saturday, June 26, when the Boys in Blue will take on Louisville City FC for a second time five weeks at Lynn Family Stadium (7:30 p.m. kickoff, live on MyINDY-TV 23 & ESPN+).

Indiana’s Team will then return home on Saturday, July 3, to take on Birmingham Legion FC on “Indy-Pendence Night” at Carroll Stadium. Tickets for the 7:00 p.m. ET kickoff are limited but still available and can be secured by visiting indyeleven.com/tickets or by calling 317-685-1100 during regular business hours.  Fans who can’t make it to “The Mike” can follow the action on WISH-TV 8, ESPN+, Exitos Radio 94.3 FM/exitos943.com, and the @IndyElevenLive Twitter feed, presented by Central Indiana Honda Dealers.