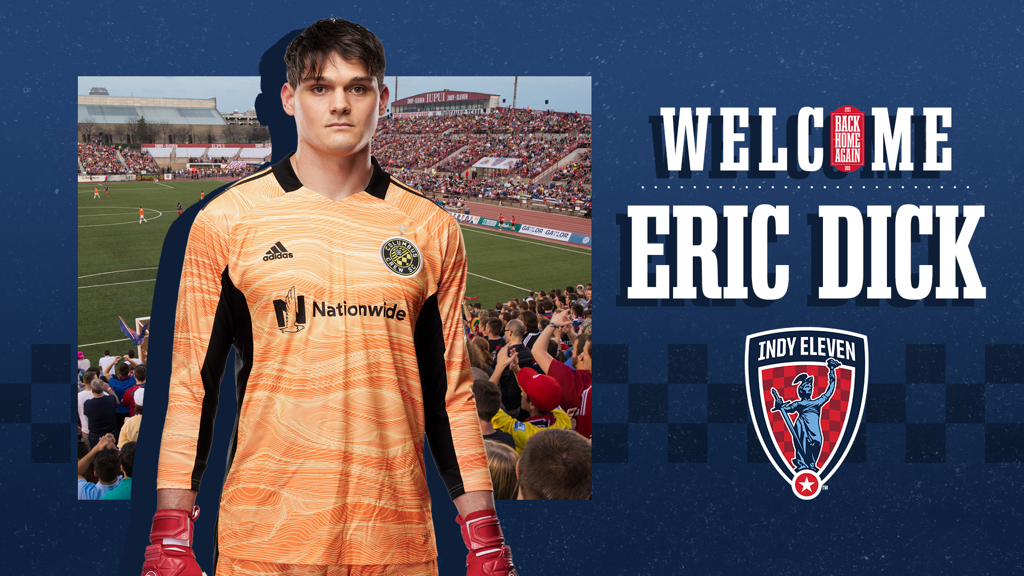 INDIANAPOLIS – Indy Eleven today announced the club has agreed to a loan agreement with Major League Soccer side Columbus Crew SC that will bring Carmel native Eric Dick to Indiana’s Team. Terms of the deal that brings the former Butler University standout goalkeeper back to Central Indiana will not be released, per club policy.

The transaction provides Indy Eleven with some veteran cover between the posts while goalkeeper Jordan Farr recovers from a hand injury suffered during last week’s match against Pittsburgh Riverhounds SC. The 26-year-old netminder will compete for playing time with Bobby Edwards, who made an impressive eight saves in his Indy Eleven debut on Sunday that helped the Boys in Blue to a crucial 2-1 road win at Children’s Mercy Park – the venue that Dick called home for much of his budding professional career.

“Indy Eleven is delighted to bring in a familiar presence in Eric Dick, who knows our league and our club quite well,” said Indy Eleven Interim Head Coach Max Rogers. “Being the professional he is, we expert Eric to get up to speed with the squad quickly and be able to step in seamlessly if called upon.”

Dick was signed by the defending MLS Cup champion Crew SC this past offseason after being drafted by Sporting Kansas City in the first round (13th overall) of the 2018 MLS SuperDraft. Dick made one MLS start for the Kansan side in 2019 and spent most of his first three seasons in the pros in the USL Championship, making 24 combined appearances with Swope Park Rangers (2018-19), Tulsa Roughnecks FC (2019), and Phoenix Rising FC (2020).

While playing at Butler from 2013-17, Dick compiled an impressive 0.96 goals against average and 28 shutouts as a four-year starter (71 appearances), culminating with an All-BIG EAST First Team Selection following his senior season in 2017.

While at Butler, Dick suited up alongside new Eleven teammate Jared Timmer for his final three seasons, while another new Eleven defender, A.J. Cochran, will be familiar with the Carmel native after they both joined Phoenix for the 2020 Championship campaign.

Dick has reported to the team’s Grand Park training center home and will be available for selection this Saturday, June 26, when Indy Eleven (4W-4L-1D, 13 pts, 3rd place in Central Division) returns to action with the next chapter of the legendary Louisville-Indianapolis Proximity Association Football Contest rivalry against Louisville City FC (5W-2L-1D, 16 pts., 2nd in Central). The second meeting between the LIPAFC combatants at Lynn Family Stadium in five weeks’ time is set for a 7:30 p.m. ET kickoff and can be seen live on MyINDY-TV 23 & ESPN+ and followed online via the @IndyElevenLive Twitter feed, presented by Central Indiana Honda Dealers.

Indiana’s Team will then return home on Saturday, July 3, to take on Birmingham Legion FC on “Indy-pendence Night” at Carroll Stadium. Tickets for the 7:00 p.m. showdown – featuring $3 concessions prices on beer, wine, cocktails, sodas & all food items – are limited but still available and can be secured by visiting indyeleven.com/tickets or by calling 317-685-1100 during regular business hours.  Fans who can’t make it to “The Mike” can follow the action on WISH-TV 8, ESPN+, Exitos Radio 94.3 FM/exitos943.com, and the @IndyElevenLive Twitter feed.