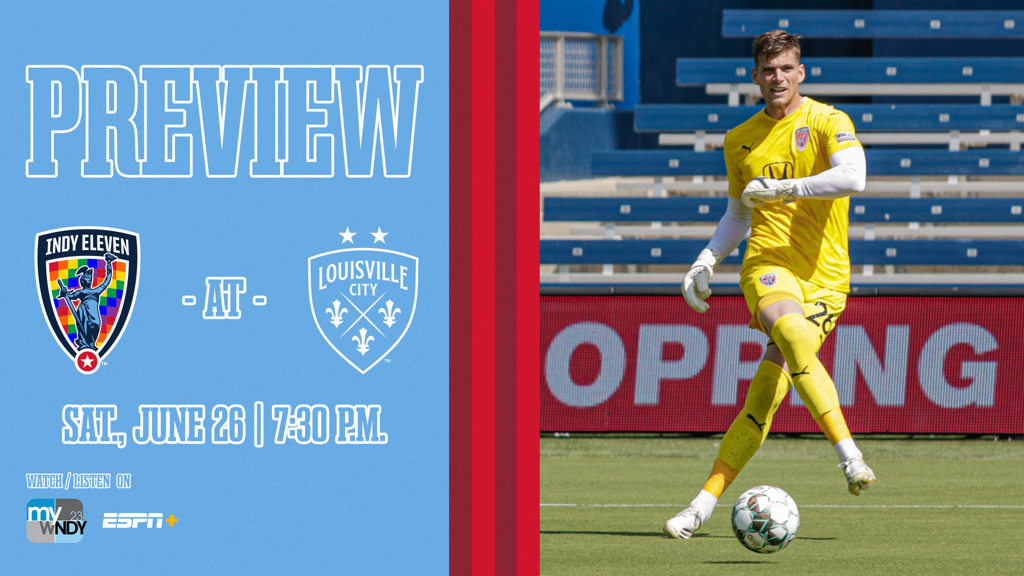 Following a turbulent week, Indy Eleven bounced back and snapped its four-game winless streak with a 2-1 away victory at Sporting Kansas City II last Sunday afternoon. Interim Head Coach Max Rogers was able to get the job done in his first match at the helm and secured a valuable three points that saw Indiana’s Team shift back into the top half of the Central Division over the weekend.

Rogers will lead once again for this weekend’s tilt just across the Ohio River, where the Circle City squad will look to take over the Central’s second place spot from Louisville City FC in the latest chapter of the storied Louisville-Indianapolis Proximity Association Football Contest, colloquially known as the LIPAFC.

Saturday’s match will mark the tenth in a still young season for Indiana’s Team, which will look to match some answers to the laundry list of questions surrounding the squad heading into the next stretch. Some of those seemed to get answered in Rogers’ debut with the Boys in Blue putting seven shots on target against SKC II, equaling the total from their previous three games. A second trip to Lynn Family Stadium in five weeks’ time will be an excellent test to see if Indy’s offense can replicate that aggression more consistently against a LouCity side that allowed only two shots on frame (both from the penalty spot – in their first affair on May 29.

Having scored five of seven goals from set pieces through its first eight outings, open-play goals from Nicky Law and Gordon Wild in the Father’s Day contest at Sporting KC II was a refreshing change of pace for the attacking corps. It was Englishman’s goal in the 19th minute that no doubt jolted Eleven fans out of their seats as the Wild-Ayoze-Law connection fired in perhaps Indy’s most impressive team goal so far this season. If that wasn’t enough, the full-field build that led to Wild’s game-winning goal gave fans a glimpse of what the Rogers’ era may hold for Indiana’s Team.

Louisville City comes into this match with very different storylines surrounding them. Despite having lost Head Coach John Hackworth just one game into the 2021 season, the Boys in Purple have bounced back as of late after a sluggish start under interim coach Danny Cruz. LCFC has scored eight times while collecting all nine points in their last three contests – home shutouts against Memphis 901 FC (3-0) and Birmingham Legion FC (2-0) preceding a takedown of FC Tulsa on the road last time out (3-2). The team across the river has a newfound knack for scoring early, with all three goals last Saturday in Tulsa coming in the first 10 minutes before they held on late to secure the triumph. This Louisville team will no doubt come out hungry to avenge their first loss in the LIPAFC rivalry since 2018 – and to prove they are the premier team in the Central Division.

The all-time series has not particularly favored Indiana’s Team, specifically on the road. In a COVID-shortened 2020 season the Boys in Blue couldn’t find the right way forward against Louisville, drawing once on the road and losing the other three matches, those results stretching their overall winless streak in the rivalry dating back to 2018 to 10 games.

However, the Eleven did manage to squeak out a 2-1 victory last time out on Louisville's home turf on May 29, the win coming on the back of two Jordan Hamilton penalties in the second half. The Canadian received a USL Championship Team of the Week nod for his performance that put Indy in the win column for the first time in their history against Lou City on the road.

The proximity of the contest will no doubt play a factor into the matchup. With just a little over one hundred miles separating the two rivals, fans of the Boys in Blue will hit the road and make themselves heard at Lynn Family Stadium. Should the Eleven find victory once more against their rivals, it’ll mark the first time Indy has beaten Louisville twice in a calendar year in the history of the LIPAFC rivalry.

“Bobby Edwards with the save!” is something you may have heard once or eight times last Sunday if you tuned into Indy’s match at SKC II. One of the Eleven’s 16 offseason acquisitions, Edwards made his long-awaited debut for the Boys in Blue Sunday filling in for an injured Jordan Farr. Edwards came out of the gate strong with an astounding eight saves in his debut to stifle Sporting KC’s attack that recorded 22 shots. With Farr out for a bit of time, it’ll be the 25-year-old between the sticks for Indiana’s team moving forward, and rightfully so after that performance.

The former FC Cincinnati man is well traveled in his short career already. Edwards played collegiately for St. Joseph’s University, Monmouth University, and Mount St. Mary’s University before hopping across the pond to begin his pro career for Portadown in the Northern Ireland Football League Championship. Edwards would help lead Portadown to the title and promotion back to the NIFL Premiership before joining FC Cincinnati in 2020 and, eventually, Indy Eleven. You can learn more about the affable Edwards via our appropriately titled “Get to Know: Bobby Edwards” feature from earlier this season.

The New Jersey native will have a daunting task this weekend when the Boys in Blue pick up the LIPAFC rivalry, as he’ll be tasked with keeping one of the USL Championship’s most in-form squads in check. LCFC’s 14 goals from its first eight games is tied for the third-most in the Eastern Conference and fifth overall – and with eight of those coming in its last three outings Edwards will no doubt have to bring his A-game to Lynn Family stadium. However, with a fantastic debut under his belt, the butterflies should be gone and the sky's the limit for the man in goal, and Indy will need him in top form for the rivalry bout.

While most teenagers are trying to figure out algebra, Jonathan Gomez is trying to figure out if he’s going to play for the United States or Mexico internationally. Good problem to have. Gomez has been called into Mexico’s squad to train in the past and was recently named to the 60-man preliminary Gold Cup roster for the United States. While Gomez is a longshot to make the USMNT cut, the 17-year-old could be the left back of the future for whichever country he chooses – but he is most definitely the left back of the present for Louisville City FC.

Beginning his career with North Texas SC before signing with Louisville, Gomez was playing in USL League One at only fifteen, when he made eight appearances for the Texan side. He’s started off his third full professional season with a bang, having already notched an assist to add to his first professional goal against FC Tulsa last weekend, a sublime foot-footed shot in the 7th minute that put Louisville ahead 2-0 at the time.

The wide defender has started six of LCFC’s eight games so far this season, but didn’t feature in the 18 for the first LIPAFC meeting. However, Gomez has become a stalwart in the Lou City backline in recent weeks thanks to a team-leading 17 interceptions, and he also ranks as the team’s second-best duelist with 38 duels won. These defensive stats may not be as glamorous as the goal and assist, but it is eye popping that a 17-year-old is a top two player defensively in multiple statistical categories for the most dominant Eastern Conference franchise over the last handful of years.

You may have heard the phrase “young gets it done.” Louisville is employing that strategy with Gomez, and it is paying off in huge dividends thus far. The Keller, Texas native will be tasked with containing forward Gordon Wild, who fired home his first Indy Eleven goal this past Sunday. It’ll be a battle between two players in good form, and it may just tilt the game one way or the other.