Eleven Explode for Three Goals on the Road, Earing a Road Point from Rivalry Tilt 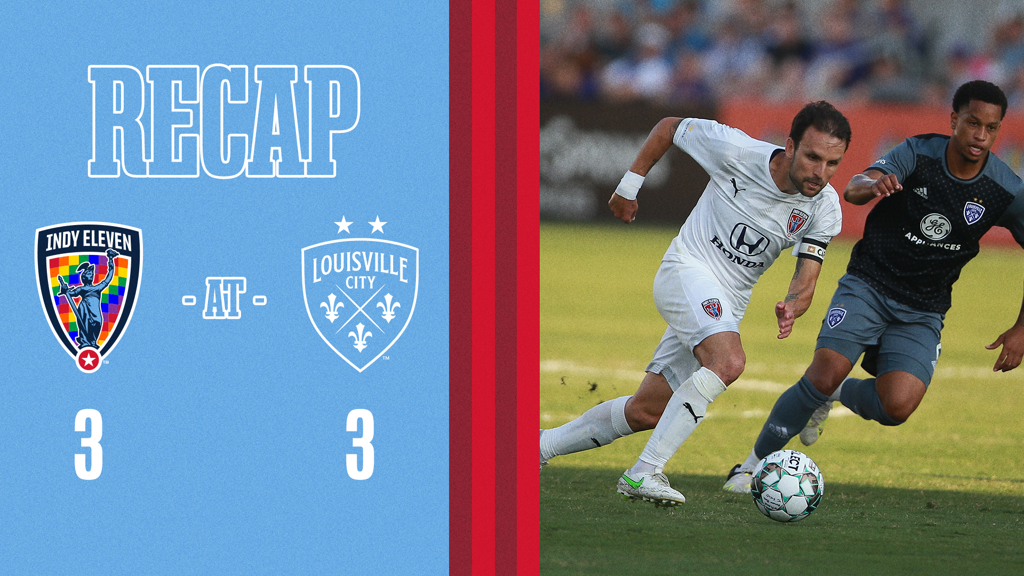 LOUISVILLE, KY. – Indy Eleven’s suddenly charged attack tallied a season-high three goals, but this time out it was only good enough to split the points as rival Louisville City FC found  trio of their own to cement a 3-3 draw in a thrilling chapter of the Louisville-Indianapolis Proximity Association Football Contest (LIPAFC) rivalry. Goals by Indy’s Cammy Smith, Neveal Hackshaw and Manuel Arteaga all came in the first half, the first two drawing Indiana’s Team even, only to see a late Corben Bone tally force a share of the spoils for the home side.

Under the guidance of Interim Head Coach Max Rogers, Indy has found five goals over the past two matches, revitalizing an attack that had scored just twice in its previous four games. With goals finding the back of the net left and right, Rogers remains still unbeaten over his first two games in charge of the Boys in Blue, tonight’s draw coupled with a 2-1 win last Sunday in his sideline boss debut at Sporting Kansas City II.

The first 20 minutes provided four of the six goals and bundles of excitement for the 10,927 in attendance at Lynn Family Stadium – including a sizeable traveling Brickyard Battalion contingent. Louisville struck first in the sixth minute with the game's first concrete chance. Forward Brian Ownby snaked through the Indy defense and deep into the box before delivering a low cross that found the feet of Paolo DelPiccolo, who slotted home with a nifty flick from three yards out. However, it wouldn't take long for the Boys in Blue to find an answer, as only three short minutes later Indy found themselves in a threatening position just outside of Lou City’s eighteen. Eleven captain Ayoze laid the ball off to Hackshaw, whose delectable cross found the head of Smith. His nod home resulted in his first goal as a member of Indy Eleven, and also gave Hackshaw his first assist of the season along the way.

The Eleven couldn’t celebrate for long as they found themselves behind yet again in the 14th minute, when 17-year-old defensive sensation Jonathan Gomez saw his chance and took it. The LCFC defender had space and said “Why not?” from 25 yards out, his shot deflecting off the leg of Indy defender Karl Ouimette, which sent goalkeeper Bobby Edwards the wrong way and put Lou City ahead 2-1. Yet again, Indy would hit back quickly, evening up just six minutes later. A Gordon Wild corner was cleared out and eventually played back to midfielder Nick Moon, who served a ball in on a silver platter to Hackshaw. The Trinidad and Tobago international found himself behind the Lou City backline with only the ‘keeper to beat – and he did just that with a deft, first-time touch that slotted home to the bottom right corner for his first goal this season.

After the excitement of the first 20 minutes the sides settled in defensively, but each would still find a chance or two. Arteaga streaked down the right side after a ball from Wild in the 28th minute, but his shot was deflected away. Minutes later it would be Ownby again sauntering down Louisville’s right flank before whipping in a swerving cross, but it was met by the outstretched foot of Ouimette before it could find Niall McCabe at the back post, drawing applause from a thankful Edwards.

With each team trying desperately to nab a third goal before the halftime window for a bit of an extra edge, Indy was the one to break out in the 41st minute. A beautiful bit of buildup play down the left resulted in Ouimette finding Arteaga, whose 1-2 with the Scotsman Smith resulted in a perfectly weighted ball into the top of the area. The Venezuelan’s left-footed finish delivered his third goal as a member of the Boys in Blue, ending an electric half that gave Indiana’s Team three goals in a match for the first time in 2021 and a 3-2 advantage heading into the break.

After the goalfest that was the first half, it took 10 minutes into the second for either team to provide danger. Again it was Ownby at the center of it as he cut horizontally just outside the box and eventually slid the ball through the Eleven defense to Gomez, who looked to grab his second goal only to see his close range shot defended well by Edwards at his near post.

Louisville held onto the lion’s share of possession moving forward and consistently knocked crosses into the box from both wings, but Indy’s defense looked impenetrable, at least until the 78th minute. Ownby found space on the right wing before zeroing in on Corben Bone with a sweeping cross. In traffic at the corner of the six, Bone proceeded to flick home his second goal against the Boys in Blue this season, this time leveling the game at 3-3 to set up a hectic finish.

Louisville nearly struck again in the 85th when Kyle Greig was left in the middle of the box with space, but the forward couldn’t help but send the ball straight into the hands of Edwards. The defensive trio of Hackshaw, Ouimette and A.J. Cochran stood tall through the final ten minutes and sent away several Louisville attempts, but one last cross found the 25-year-old Edward’s hands in the 95th minute just before the final whistle, sealing a point for each side.

After three down years in the LIPAFC rivalry series, Indiana’s Team has started the 2021 slate by taking four of a possible six points from two away days at Lynn Family Stadium. The two sides will take the summer off before renewing acquaintances in Indianapolis on Sept. 18 and Oct. 16.

Indiana’s Team will return home next Saturday, July 3, to take on Birmingham Legion FC on “Indy-Pendence Night” presented by IBEW Local 481, featuring $3 concessions all evening at Carroll Stadium. Tickets for the 7:00 p.m. ET kickoff are limited but still available and can be secured by visiting indyeleven.com/tickets or by calling 317-685-1100 during regular business hours.  Fans who can’t make it to “The Mike” can follow the action on WISH-TV 8, ESPN+, Exitos Radio 94.3 FM/exitos943.com, and the @IndyElevenLive Twitter feed, presented by Central Indiana Honda Dealers.