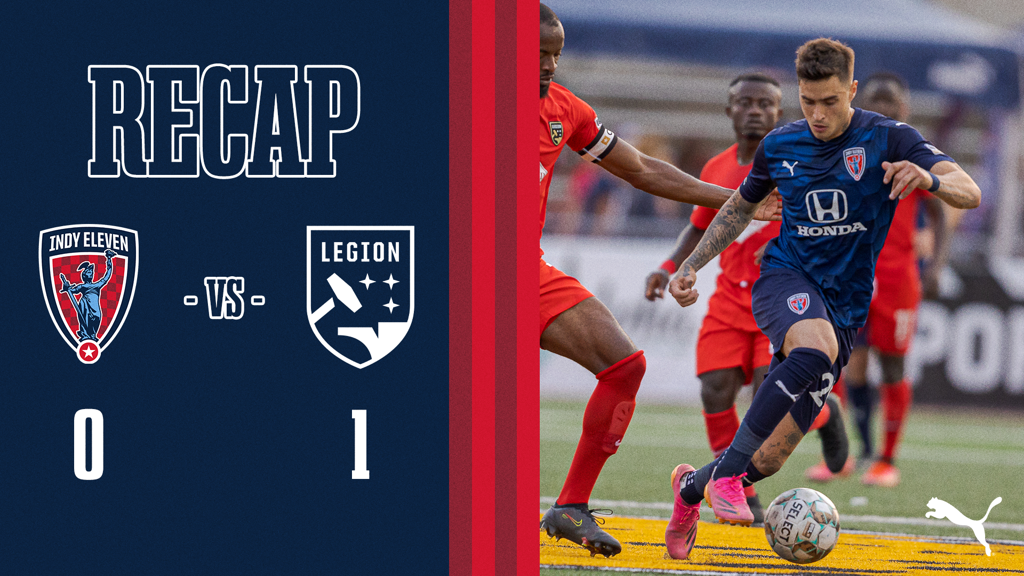 INDIANAPOLIS  – While Indy Eleven goalkeeper Bobby Edwards recorded five saves, it was an early penalty kick conversion sent past him by Birmingham Legion FC striker Neco Brett that made the difference in a 1-0 defeat for the Eleven Saturday evening at IUPUI Michael A. Carrol Stadium.

“The first half was obviously a slow start. They got a penalty, which I think was a harsh call, but it is what it is. They got that inside of ten minutes so it didn’t take a specialist to see we started the game slowly,” said Indy Eleven Interim Head Coach Max Rogers. “But we grew into the first half and obviously had some good balls into the box, but we missed that final touch.”

The loss kept Indy Eleven (4W-5L-2D, 14 pts.) in fourth place in the Central Division standings, while Legion FC (7W-3L-1D, 22 pts.) used the three points to go back atop the Central table. Indiana’s Team continues to see struggles on its home pitch, having now gone winless in its last four times out at “The Mike.”

It was Birmingham taking the lead through somewhat suspect means in the eighth minute, when Legion FC talisman Neco Brett calmly converted from the penalty spot to register his eighth goal of the season. The PK was set up two minutes prior when J.J. Williams made the most of limited contact inside the penalty area under Karl Ouimette’s challenge.

Indy’s first chance to even up came in the 13th minute, when Nicky Law’s sliding attempt to get on the end of Manuel Arteaga’s near post cross came up just short. In the 15th minute Legion FC midfielder Mikey Lopez stepped up from his deep midfield position to drill a 25-yard shot that curled just past the upper corner, and Arteaga hit one much the same 10 minutes later that put Birmingham’s backline on notice. It was Arteaga on Gordon Wild’s cross in the 34th minute that forced longtime Eleven foe, Birmingham netminder Matt VanOekel, into his first save of the night, and Wild threatened goal himself a minute later with a bending shot that bounced just wide.

Birmingham grappled back the attacking momentum over the final five minutes of the half, nearly finding a second when Bruno Lapa got behind the Indy backline, but Eleven ‘keeper Edwards was on the spot – and off his line quickly – to punch away the loose ball. Brett chased glory in the 44th minute with a sidewinding shot from distance that sailed high, that chance marking the final threat of the half for either side.

After getting outshot 10-5 in the opening half, the Eleven made a determined effort to start on the front foot in the second 45. Just two minutes in midfielder Nick Moon’s shot from the top of the area nearly took a fortunate deflection past VanOekel, only to see the veteran netminder make a reflexive recovery. Arteaga got his first look of the half after gaining a half yard of space in the 54th minute, but his near-angle blast from eight yards was always going to be wide.

The Eleven nearly pulled off a spectacular equalized in the 64th minute when Arteaga headed back a laid off ball for a charging Wild, who sliced his shots from near the spot just wide. Arteaga nearly headed one home himself off a Moon cross three minutes later but pushed it wide as well. In between, Edwards provided cover for an Eleven giveaway in its defensive third by charging off his line and going low to stop Brett’s breakaway, and then drew a yellow when he pounced on the rebound and drew a late kick from Legion FC substitute Jaden Servania.

After another Wild shot from distance was pushed wide in the 75th minute, Legion FC was able to neutralize the proceedings down the stretch, drawing fouls and holding the possession deep into regular time. Lopez nearly tallied from distance in the 85th minute only to see his chance spin wide, while Eleven midfielder Nicky Law’s turning effort from 12 yards missed the far right post, but not by much. As the match entered four minutes of stoppage time, it was Wild drawing a foul 25 yards out to give the Eleven one more quality opportunity, but the German striker’s attempt was collected well by VanOekel on his line. In fact, it was Brett who’d have the last say on a counter, his blast from 20 yards sailing high but effectively ending the match and securing a smash-and-grab three points on the road.

“I think we grew into the game and the second half was all us. The players were in good spirits to keep going, keep creating chances, but once again we just lacked that final ball, that final touch on a cross,” said Rogers. “As I said the spirit was really good and I think that's a real important for everyone to see.”

Indy Eleven will return home on Saturday, July 17, when it hosts Community Heroes Night, presented by Community Health Network Foundation, against Memphis 901 FC. Tickets for the 7:00 p.m. ET kickoff are limited but still available and can be secured by visiting indyeleven.com/tickets or by calling 317-685-1100 during regular business hours. Fans who can’t make it to “The Mike” can follow the action on MyINDY-TV 23, ESPN+, Exitos Radio 94.3 FM/exitos943.com, and the @IndyElevenLive Twitter feed, presented by Central Indiana Honda Dealers.