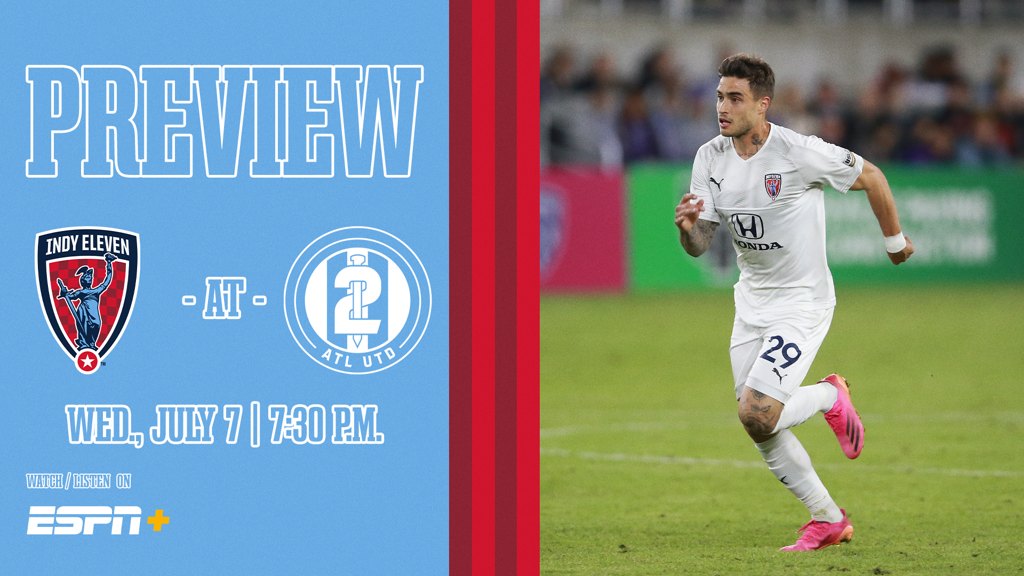 The Boys in Blue will look to bounce back in quick fashion on the road this Wednesday in their first meeting of the season with Atlanta United 2. Indy’s woes at home continued this past Saturday, falling to Birmingham at home 1-0 when Neco Brett notched the game-winning goal after a suspect penalty shout in the 8th minute of play, bringing the Eleven’s home record to 1W-4L-1D on the season. The Eleven have had much different luck on the road, accumulating 10 points (3W-1L-1D) away from home while taking down the likes of Birmingham, Louisville City FC and Sporting Kansas City II in opposition territory. Indy will be looking to do the same in Atlanta’s Fifth Third Bank Stadium Wednesday night.

Indy continues to create chances but can’t quite get on the end of them. In fact, the Boys in Blue registered 66% of the possession and 15 shots against Birmingham, but finished the game without finding a way to put one in the back of the net. While Indiana’s Team looked lively, they were unable to convert chances to salvage at least a point.

Though the winger missed a few matches with injury, Ayoze has since returned to his normal self and provided a spark along the left flank that caused issues for opposing defenses. Mix in a little flair with Nicky Law and Gordon Wild in the attacking third, and you’ve got an offensive triangle that can find space to play a ball. Moving the ball hasn’t been an issue for Indiana’s Team this season, with the team completing nearly 81% of its passes, but with the team’s goal total (12) sitting in the lower half of the full league standings, the flashes of brilliance fans have seen over the last three games will need to start finding the back of the net in order to secure a spot in the upper rungs of the Central Division ladder.

The Eleven have been experimenting with different formations since Interim Head Coach Max Rogers has taken over. The Boys in Blue still boast three at the back with two wing backs in tow, as they did to start the Birmingham game, but at times they have switched over to four at the back, which they switched to in the second half of the Birmingham game. The Boys in Blue manned a back four at times against Sporting Kansas City II, as well, but before these matches, it had been quite some time since Indy had played a true back four. When Indy switched to a back four in the second half, that was when they were really able to grab hold of the game and dominate possession against Birmingham, even if they couldn’t find a goal in the end. The team created chances and found themselves setting up shop in Birmingham’s final third, exactly where the Boys in Blue would like to conduct business. With Neveal Hackshaw away at international duty for an unspecified period of time at the CONCACAF Gold Cup, we could see Indy shift to two center backs instead of three, with one of their defensive stalwarts missing.

Atlanta United 2 will enter Wednesday night looking to move into third place in the Central Division, so long as they can walk away with a win. Atlanta snatched a 2-2 draw from Memphis 901 FC in the 94th minute on a penalty last Saturday, both teams finishing the game with ten men after a pair of red cards in the first half stoppage time, meaning that the Five Stripes will be without forward Matías Benítez for their midweek tilt with Indy. Atlanta’s squad has had a bit of a discipline issue having registered three red cards so far this season, which is tied for the league lead with Memphis and San Antonio FC. A bright spot for ATL is that Danial Sebhatu made his official debut and scored his first team goal at only 16-years-old against Memphis.

Also contributing to Atlanta’s offense is Darwin Mattheus, who like Indy’s own Manuel Arteaga made the move from Venezuelan side Zamora to the USL Championship last season. Mattheus is the team’s co-leader in chances created (10), and a big part of Atlanta’s offense surrounds his efficiency in slotting home chances. Atlanta has the fifth best conversion rate in the league (19%), further proving that United 2’s strike force is not one to be taken lightly.

This is the first time this season that these two teams will meet – and this is the last of its seven fellow Central Division opponents Indy will meet for the first time this season. The last time these teams squared off in league play was on September 25, 2019, Atlanta claiming a 2-1 home victory. Lots has changed since that meeting, as both teams will enter Wednesday evening with large roster turnovers in their first competition following a 2020 season that saw these teams separated into different divisions due to COVID-19 travel restrictions. .

As shown above, Indy has never notched a victory at Atlanta United 2, but will look for their luck to change this Wednesday. Indy has garnered two home victories against Atlanta in the past, but it has been a topsy-turvy 2021 that has seen Indy achieve much better results on the road than at home. Look for the Boys in Blue to come out with a tinge of confidence due to their success on the road so far this season.

Manuel Arteaga feels so close to breaking out. Since joining Indiana’s Team over the elongated offseason from Venezuelan side Zamora, the striker has netted three goals and assisted once in his first 11 appearances. Two of those goals came in Indy’s first three games of the season, before Arteaga got back on the score sheet in in the team’s 3-3 draw at Louisville on June 26. The former Primera División man has found success in his central attacking role due to his size and his strength, often bossing around defenders through a storm of physical play without once having been booked for it. This style allows the 27-year-old to find space and allows him to play the ball to his teammates or run at the goal himself.

The Venezuelan is getting in the right places, that much is evident from his five shots and four chances created in Saturday's match against Birmingham. Arteaga is third on the team with 11 chances created, trailing only the duo of Nicky Law (21) and Gordon Wild (19), but the forward has got to stay on target when it comes to his shooting boots. Of his team-leading 31 registered shots this season, only eight of them have been on target and only three of those have gone in for goals. Many of Arteaga’s shots require Indy’s faithful to hold their breath, with some going just wide of the post or just over the bar. With Arteaga often being so close to finishing his chances, it’s hard to believe he hasn’t grabbed more goals this season. In a game of inches, Arteaga is so close to kicking into high gear and becoming a scoring machine for Indy Eleven and there would be no better time to slam on the gas than after last weekend’s shutout.

Much of Atlanta United 2’s success has come from its ability to not rely on one person too much, but Aiden McFadden has been showing up in big ways for the Five Stripes. The Notre Dame Fighting Irish product is off to a hot start to his first professional season. The 22-year-old signed with Atlanta United 2 shortly after being selected 59th overall in the 2021 MLS SuperDraft by Atlanta’s first team and has featured as a kind of right back/winger combo throughout his rookie campaign. McFadden is currently one of fourteen USL Championship players to fire home five goals this season, registering braces against FC Tulsa and Memphis 901 FC.

However, much like the Arteaga, a majority of McFadden’s goals came at the beginning of the season, with the young gun only finding the back of the net once in June, albeit a big one that propelled ATL UTD 2 to a big 1-0 win in Louisville. The winger does like to create, having totaled five key passes in nine appearances up until this point, and swung in the cross that eventually led to Sebahtu’s first career goal.