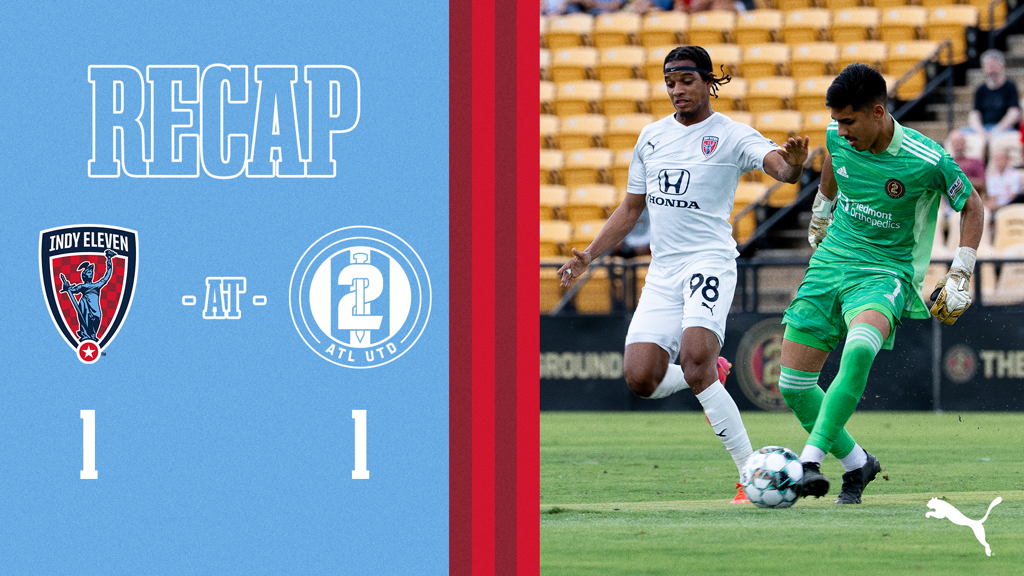 KENNESAW, Georgia – Indy Eleven continued its trend of grinding out results on the road, using Jordan Hamilton’s fourth goal of the season and seven big saves by goalkeeper Eric Dick in his Eleven debut to notch a 1-1 draw against fellow Central Division foe Atlanta United 2.

Tonight’s draw kept Indy Eleven (4W-5L-3D, 15 pts.) one point in front of ATL UTD 2 (3W-4L-5D, 14 pts.) in the middle of the Central standings. The result also kept Indiana’s Team undefeated in its last three road outings and pushed its road record on the season to an impressive 3W-1L-2D mark.

"Atlanta are a team who are well-organized, and they have some good talented players,” said Indy Eleven Interim Head Coach Max Rogers. “This was the first time we’ve played against them this season, so there were a few unknowns, but it was just about reenforcing the messages that we spoke about before the game in terms of how we wanted to press and the little details behind it, and also having the confidence of going to play.”

Facing the middle match of a three-game week, Coach Rogers made six changes to his starting XI from Saturday’s home contest against Birmingham Legion FC, including giving Dick, the Carmel native and Columbus Crew SC loanee, his first start between the posts since arriving in mid-June.

“It was always the plan to play Eric. He trains really hard, he’s great in the locker room, and he’s a great person – which is so important,” commented Rogers. “You can see the saves that he made tonight were really good. As I always say, goalkeepers are allowed to make saves – that’s what they’re there to do. Eric did well and I’m sure he’s relieved in a sense to get match minutes and can go forward from there.”

While the open of the game was end to end, choppy field conditions made the play ragged and chances hard to come by. The first shot on goal came from Indy Eleven midfielder Gordon Wild, whose curling shot for the far-left post was collected on the fly by ATL UTD 2 goalkeeper Rocco Rios Novo.

Atlanta outside back Aiden McFadden pressed up into the right side of the area twice to press the issue in the middle of the half, but Dick would do well to cut off the angle both times, first darting hard off his line before guarding his near post with a kick save.

While Indy Eleven would find some space via quick build-ups on the counter as the half continued, none resulted in much danger until the 44th minute when it was Wild again firing from near the top of the area, this time sending his shot whistling past the upper right 90. ATL UTD 2 closed the half with forward Darwin Matheus’ hard shot being blocked by Eleven midfielder Jeremiah Gutjahr, the resulting corner being cleared to end the first 45 minutes scoreless.

Indy Eleven was the aggressor coming out of the second half, the fresh legs of Nick Moon providing some added energy from the right flank. While Indiana’s Team had plenty of movement in the final third in the first 10 minutes of the stanza, it was a set piece that midfielder Peter-Lee Vassell sent just high from 30 yards out in the 54th minute that provided the most danger.

Just after the hour mark it was Atlanta United 2 midfielder Chris Allan turning a half chance into a threat from 25 yards, but Dick did well to dive right and gather the skipping shot at his right post. A minute later, Atlanta sub Ajani Fortune tried his luck from 30 yards with a cheeky chip that floated harmlessly over the Eleven goal.

It was the Boys in Blue who finally broke through in the 64th minute, and it was the substitute Moon setting things up by picking off a pass at the edge of the final third and carrying into the right side of the area before cutting the ball back to the six. Hamilton hustled to get inside his mark and slid in to hook a shot around Rios Novo that gave Indy the lead, and Hamilton sole possession of the team lead in goals with four on the campaign.

Fortune tried to even up quickly with a flick from the corner of the six-yard box in the 69th minute, but Dick was quick off his line again to cut the angle and parry away for a corner. It was Fortune again being bold two minutes later, the forward ending his run from midfield with a 22-yard strike that clanged off the base of the left post and away from goal. The Five Stripes would indeed find their equalizer in the 72nd minute, when midfielder Connor Stanley accepted a ball 15 yards from goal with a one-touch turn away from traffic before firing into the far-right side, leveling the match at 1-1 heading into the final quarter hour.

Indy substitute forward Manuel Arteaga looked to put Indiana’s Team back up quickly, but his finish was negated after his splitting of the center backs was deemed to start from an offside position. Another man off the Eleven bench, midfielder Cammy Smith, tried to catch Rios Novo sleeping with a side-winding effort from 40 yards a minute later, the chance bouncing just wide left.  In the 82nd minute it was Moon setting up Arteaga with a through ball into the area, but the Venezuelan blasted his shot just past the upper right corner with only the ‘keeper to beat.

On the other end it was Dick making yet another huge stop in the 84th minute, this time batting away Alexander Garuba’s open header from 10 yards out. Three minutes later it was Rios Novo’s time to shine again, making a low save on Eleven midfielder Nicky Law’s placed shot towards the lower right corner and then pouncing on the rebound before Arteaga could tap in on the doorstep. After Arteaga pushed a shot from the top of the box just wide a minute later, Eleven substitute midfielder Aboubacar Sissoko once again pressed Rios Novo into action with a save of his hard blast from 20 yards, that chance in the final minute of regulation marking the final one of note to a frantic finish at Fifth Third Bank Stadium.

A busy week on the road for Indiana’s Team continues this Saturday, July 10, when the Boys in Blue head west to the Sooner State to take on OKC Energy FC (8:30 p.m., live on ESPN+). Indy Eleven will return home next Saturday, July 17, when it hosts Community Heroes Night, presented by Community Health Network Foundation, against Memphis 901 FC. Tickets for the 7:00 p.m. ET kickoff are limited but still available and can be secured by visiting indyeleven.com/tickets or by calling 317-685-1100 during regular business hours. Fans who can’t make it to “The Mike” can follow the action on MyINDY-TV 23, ESPN+, Exitos Radio 94.3 FM/exitos943.com, and the @IndyElevenLive Twitter feed, presented by Central Indiana Honda Dealers.