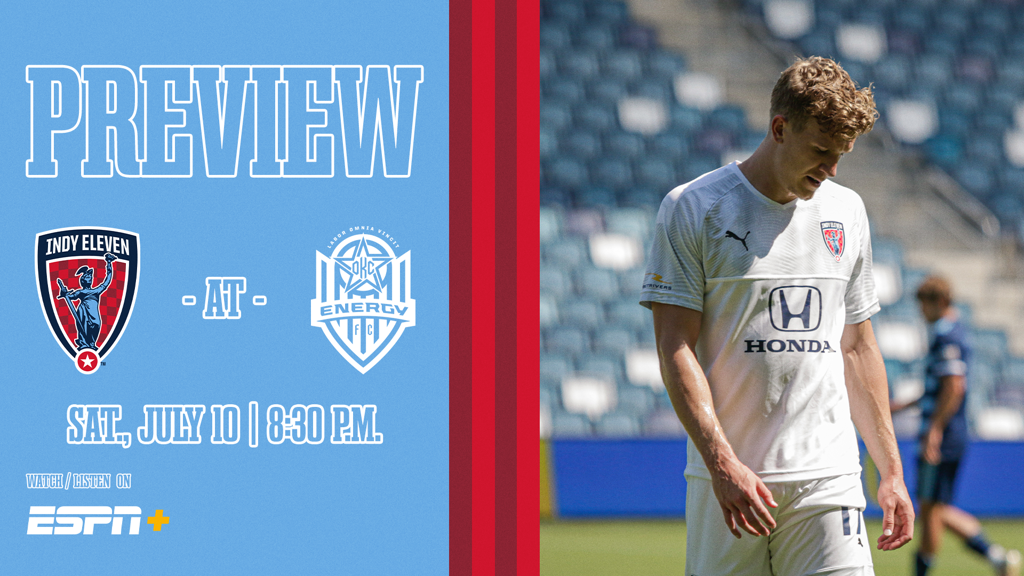 The Boys in Blue continue this week’s road show Saturday at OKC Energy FC on short rest after their 1-1 draw at Atlanta United 2 three days prior. The Eleven snatched the lead when Jordan Hamilton netted his team-leading fourth goal in the 64th minute after a wonderful ball in from Nick Moon. Ultimately, Atlanta would level the game late when Manchester United loanee Connor Stanley made a swift turn inside the box to fire home a well-placed goal in the 73rd minute. This leaves Indy undefeated in their last three road contests (1W-0L-2D), but also winless their last three times out overall (0W-1L-2D), leaving the squad eager to take three points away from an OKC team that has been energized as of late.

Through the highs and lows of Indy’s play throughout the season a consistent bright spot has been the performances of their wide players. Six of the Eleven’s ten assists have come from players who were gracing the wings, with five of those coming from the combination of Moon and forward Gordon Wild. It’s perhaps unfair to classify Wild as a “wide player” as he is naturally more of a traditional attacking midfielder or center forward, but the German has found a sort of second home manning Indy’s right forward position at times, swinging in crosses or dribbling through the defense. The Boys in Blue also rely on these wide players to be disruptive in defense and force opposing offenses inside where they let the likes of Indy’s center backs and holding midfielders knock balls away.

The Boys in Blue have looked their best when they use the creativity of the wide players to draw out defenses, allowing for central attacking players to become unmarked and deliver balls into the box. Moon was an immediate disruptor upon entering Wednesday night’s match at the half, and the attention he demanded resulted in space for others like was seen on the Hamilton goal.  Movements and chances like that are going to be what boost Indy’s goal conversion rate and garner the team increased attacking success. Indy’s offense has looked far more creative in recent weeks, now familiarity and consistency are the keys to putting it all together, and the boys on the wings will have a lot to do with that success.

Someone who will not be featuring for the Boys in Blue for some time is Indy’s favorite Trinidad and Tobago international, Neveal Hackshaw. The Soca Warriors defeated French Guinea in thrilling fashion, defeating them in penalties 8-7 (following a 1-1 draw), with Hackshaw converting the second penalty for the island nation. This means the Eleven will be without Hackshaw for at least the next two matches – Saturday at OKC and July 17 vs. Memphis 901 FC – and potentially longer should T&T pull an upset and advance from Group A in CONCACAF Gold Cup play.

His absence makes it even more of a challenge to incorporate fresh legs in defense on Saturday, but there are still options. With Jared Timmer, A. J. Cochran and Rece Buckmaster all starting both Saturday and Wednesday, look for some more possible rotation to keep things fresh and funky against the Energy, with Ayoze, Karl Ouimette and Nedeljko Malic being the freshest options, and Moon and Patrick Seagrist also working on less than the full 180 minutes across the last two outings.

OKC Energy FC are coming into this match with the energy of a toddler who just woke up from a nap. The Greens are on a four-match unbeaten streak, winning three of those, in a run of play that has birthed new life into their season. The Energy’s former manager, John Pascarella and OKC parted ways just two days after OKC’s 1-1 draw with Indy on June 2, and since then interim manager Leigh Veidman has his side feeling inspired, defeating Memphis 901 FC, Sporting Kansas City II, and ATL 2, all before a scoreless draw with FC Tulsa last Friday.

OKC has been getting it done defensively, only allowing two goals over this stretch and keeping two clean sheets. The Energy’s backline is being led by Connor Donavon and former Eleven center back Mitch Osmond, with that pair combining for an audacious 82 clearances, 29 blocks and 55 interceptions so far this season. The Greens haven’t been incredibly active offensively, only finding the back of the net ten times, but with a defense playing as well as OKC’s it may only take one goal for the Energy to find themselves in a spot to take points from any matchup.

Indy Eleven is no stranger to away days to the Sooner State, but it’s been five years since the team’s last trip to Oklahoma as it plans for its first USL Championship-era stop at Taft Stadium. The last time Indy made its way to the Electric City (no, not Scranton, Pa.) was to battle the now defunct Rayo OKC in the 2016 NASL Fall Season, in which Indy fell 2-1.

When the OKC Energy came to visit on June 2, the points were shared. Moon was able to open the scoring in the 42nd minute, but three points weren’t in the cards for the Boys in Blue as Frank López equalized for the Greens a little past the hour mark. Both Indy and OKC will look to tilt the nascent series in their favor as the schedule creeps towards the halfway point of the season.

Moon’s versatility has been on full display through the 2021 campaign, the second-year attacker having featured in several different roles for the Boys in Blue, mostly on the right side. Last year, Moon mostly played in a forward position for Indy, often playing second fiddle to former Eleven target man Tyler Pasher. Moon has experienced playing in both offensive and defensive positions through his colligate career and into his rookie season with former USL League One side Lansing Ignite, where he earned a spot on the inaugural All-League Second Team for his efforts. Though he’s spent a considerable amount of minutes in the attacking third during his time in Indy, Moon has since dropped back along the right flank while teammate Carl Haworth continues to rehab from a preseason injury. That hasn’t stopped his offensive production, as the 25-year-old is currently second on the team with two assists on nine chances created, also netting once in the previous meeting against OKC.

The Moon man has done well for himself defensively on the wing too, having won 66 duels so far this season (only trailing Manuel Arteaga’s 80) as well as adding 15 clearances and nine interceptions. Obviously, Moon is a strong contributor up and down the flank for the Eleven, and they’ll need him Saturday as the team concludes another grueling three-game week.

With his induction to Energy FC’s roster during the offseason, Bijev could very well be the missing attacking piece OKC having been searching for.. The Liverpool FC academy product is well traveled at the age of 28, having made stops in England, Germany, and his native Bulgaria before coming stateside in 2016 with Portland Timbers 2. Following a standout year with Timbers 2 that saw the striker named to the All-League First Team, Bijev was picked up by Western Conference giants Sacramento Republic FC and became one of the most recognizable names across the league during his tenure in the Golden State (2017-2020).

The Bulgarian has slammed home three goals in the past five games for the Greens, helping them find points in four out of those five. Bijev has slotted home four of OKC’s ten goals so far this season while also accumulating two assists over his 11 appearances. He’s creating chances at a high rate as well with 12 so far, which is good for third best on OKC. In fact, you’d be hard pressed to find an offensive statistical category for the Energy where Bijev isn’t near the top or at the top, showing just how integral he is to OKC’s offense. The Greens leading scorer stands at six feet tall and is good in the air and his physicality makes him a target man, something the Boys in Blue will have to keep a continual eye on throughout Saturday’s match.