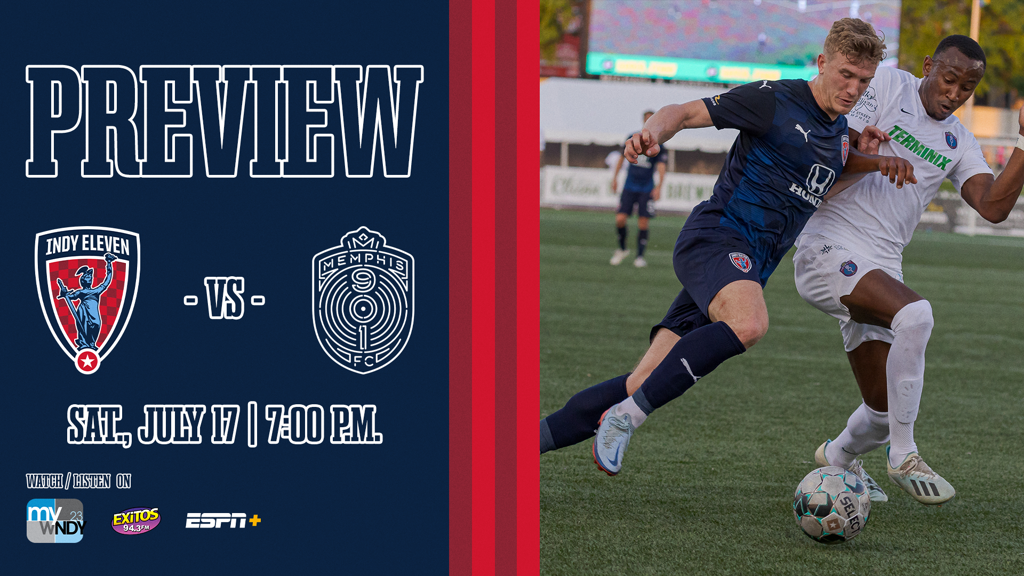 What the Boys in Blue absolutely did not do last Saturday was play 46’ of a soccer game. There certainly wasn't a weather delay followed by a power outage at OKC Energy FC’s Taft Stadium. Cammy Smith totally did not score his second goal of the season in the first half to initially put Indy Eleven up 1-0, before Energy FC found the back of the net to equalize. None of that happened, alright? Instead, OKC Energy and Indy Eleven will play at a later date. The Time Variance Authority forgives you for your confusion and encourages you to get ready for Indy Eleven’s match against Memphis 901 FC this Saturday at Carroll Stadium.

Indiana’s Team returns home looking to turn around its fortunes at The Mike, a task that will once again need to get done without defender Neveal Hackshaw, one of four USL Championship standouts representing Trinidad and Tobago at the 2021 CONCACAF Gold Cup. Indy will have to continue to patch the hole he leaves in their defense, as opposing teams average just over five more shots when Hackshaw isn’t present in the backline (11.5-16.75). Results have not favored the Boys in Blue when the 25-year-old has been absent on national team duty, but while their 0W-3L-1D record in such games could be cause for alarm, only one goal conceded in each of those last two outings – including the latest performance last Wednesday at Atlanta United 2 that saw the Eleven boast a season-high eight shots blocked and 12 interceptions – shows the coping mechanisms are coming into form.

Something that certainly isn’t lacking for Indy is the high volume of production they’re seeing from its goalkeepers. Jordan Farr, Bobby Edwards and Eric Dick have all stepped in between the sticks across the first 13 12 games, the first time in franchise history that Indy has had three different goalkeepers appear in goal in one season, with each making a significant impact. Farr, now in his fourth season with Indiana’s Team, is the #1 in the box, having registered 25 saves before he was sidelined with a wrist injury in June. Edwards stepped up in a big way, registering eight saves in his Indy Eleven debut at Sporting Kansas City II on June 20 that helped elevate his side to a much needed 2-1 victory. The Butler University Alumnus Dick was brought in on loan from Major League Soccer side Columbus Crew SC in response to Farr’s injury and made his debut against ATL UTD 2 with an inspired performance that saw seven saves from the Carmel native. With top showings from a rotating cast of ‘keepers, there’s no doubt that there are safe hands in goal for Indy, making Interim Head Coach Max Rogers’ top of the lineup sheet decision both easy and difficult at the same time.

Memphis 901 FC come into this weekend trying to find their way out of the basement of the Central Division – although their situation is not as dire as it first appears. Memphis has been riddled with injuries and players missing due to international duty throughout the 2021 season, but are starting to find solid footing and carry multiple games in hand on all but one Central foe. Kyle Murphy has caught fire in the goalscoring department for the Bluff City squad, having netted four times in the past three games and earning a nod to the bench of the USL Championship Team of the Week for Week 11 after scoring twice against Atlanta United 2.

It wasn’t all blue skies for Memphis in that game against ATLUTD 2 however, as they lost starting goalkeeper John Brener to a season-ending injury. However, Memphis signed former Saint Louis FC goalkeeper Kyle Morton on loan from MLS’ Houston Dynamo, providing a more than suitable back-up plan. Morton wasted no time, grabbing a clean sheet and helping Memphis take down Central Division leaders Birmingham Legion FC 1-0 in his debut last Saturday.

Indy Eleven will look to avenge its loss last time out against the Memphian side, which featured some questionable calls that didn’t fall in Indy’s favor. The most infamous was perhaps the “no-goal” call on forward Manuel Arteaga’s shot that banged off the bar and straight down across the goal line before rebounding back into play, for what would’ve been his third on the season at that point. It wasn’t meant to be for Arteaga or the Eleven that night, as they would eventually fall to Memphis 2-1, nearly clawing their way back into it after a goal from defender Karl Ouimette six minutes into second half stoppage time and a surge of Indy play right before the final whistle.

The Boys in Blue have historically owned this series, never scoring less than three goals in a meeting before first meeting of 2021. That includes their only previous meeting in Indy prior to 2021, a 3-0 victory at Lucas Oil Stadium on Oct. 5, 2019.

Another game, another player to watch nod for Nick Moon. Since (again) Indy definitely in no way played a game last Saturday, it’s only fair to highlight Moon for the Eleven’s matchup with Memphis (again). Moon’s versatility has been on full display through the 2021 campaign. In his second year with the Boys in Blue, Moon has featured in several different roles for Indy, mostly on the right side. Last year, Moon mostly played in a forward position for Indy, but Moon has experienced playing in both offensive and defensive positions through his collegiate career and into his rookie season with former USL League One side Lansing Ignite, where he earned a spot on the inaugural All-League Second Team for his efforts.

That hasn’t stopped his offensive production though, as the 25-year-old is currently second on the team with two assists on nine chances created. Moon looked dangerous once again in Saturday’s scrimmage, dribbling up and down that right side and looking for opportunities in attack.

Moon has been impressively on the wing, having won 66 duels so far this season (only trailing Arteaga’s 80) as well as adding 15 clearances and nine interceptions. Numbers don’t lie – Moon is a strong contributor up and down the flank for the Eleven, and they’ll need him to step up on both sides of the ball in order to send Memphis home to face the music.

Morton returns to USL Championship play once again after the former Saint Louis FC goalkeeper made the move to Major League Soccer with Houston Dynamo during the offseason. With Brenner now out due to a season-ending injury, Morton has been brought in on loan by Memphis to boost the side’s goalkeeping corps. The 27-year-old has spent a bevy of time with different USL Championship sides including the Rochester Rhinos, Pittsburgh Riverhounds SC, and most recently Saint Louis FC (R.I.P). Indy tallied a 1W-2L-1D record against Morton-guarded goals in 2020, the ‘keeper collecting a clean sheet and clinched playoff berth for STL along the way. Morton was also named as a 2020 USL Championship Goalkeeper of the Year for his efforts.

In Morton’s Memphis 901 FC debut he helped propel his new team to perhaps its biggest victory of the season so far, taking down division leader Birmingham Legion FC 1-0. The West Chester, Pennsylvania, native came up in a big way with eight saves over the course of the match, earning a spot on the USL Championship Team of the Week for Week 12 for his performance. The James Madison University alum is going to be a tough one to beat Saturday, but one of Indy’s missions will no doubt be throwing everything, including the kitchen sink, at Morton.