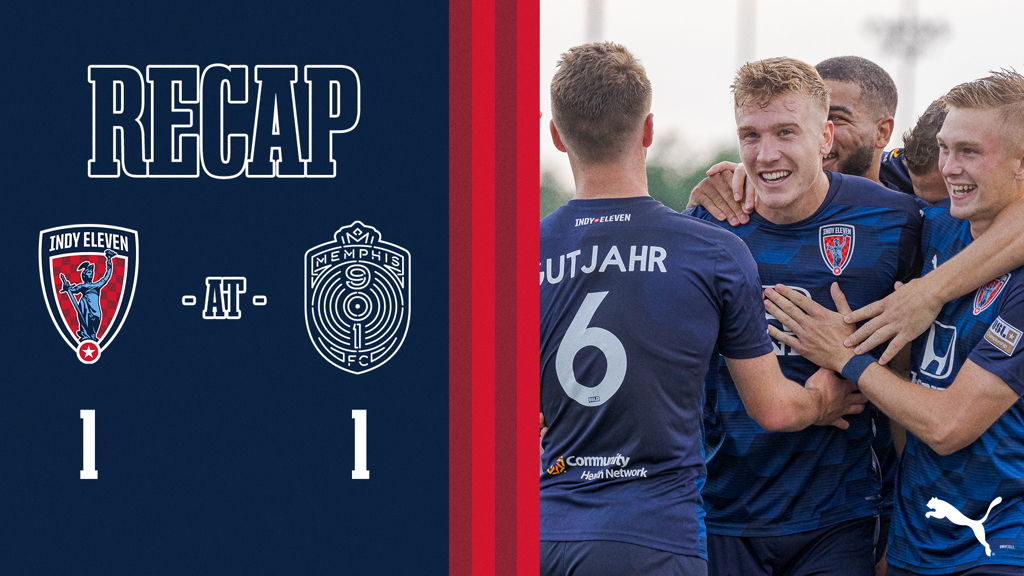 INDIANAPOLIS – Indy Eleven snapped a three-game home losing streak but was still left wanting for more after a 1-1 draw against Memphis 901 FC at Carroll Stadium on Saturday evening, Indy midfielder Nick Moon and Memphis striker Michael Salazar chiseling their names into the scoreboard with nearly back-to-back tallies early in the second half.

“It was generally good. In the transitional moments and when we lost the ball was really when they were their most threatening. They only had three shots on target and a lot from distance,” said Indy Eleven Interim Head Coach Max Rogers. “We might have lost a little organization and shape toward the end as we tried to push for a winner, but sometimes that happens. The disappointing thing is this is the third game in a row that we’ve been a goal up and we’ve conceded after that, so that’s something we really need to focus on going forward.”

Both sides took the time to find their footing in a relatively quiet opening, but Memphis fullback Niall Logue was the first to cause a ruckus in the 11th minute, sending a pass 40 yards down the field to connect with teammate Kadeem Dacres. Eleven goalkeeper Bobby Edwards was the only obstacle in Dacres’ path, but he was left untested as the shot beamed over his crossbar. The Boys in Blue responded with a chance of their own a minute later when Jordan Hamilton jumped on a poor 901 FC pass and saw open field ahead of him. Hamilton was chased down, but not before he could play a ball into Peter-Lee Vassell for a clear shot at goal, but the effort from the top of the box was batted wide by Memphis loanee goalkeeper Kyle Morton.

Fast forward to the 28th minute and Indy would threaten yet again, this time via a nice bit of buildup play from Nicky Law and Vassell that eventually found its way to Hamilton, whose blasted a low shot as the last Bluff City defender jockeyed him. However, Morton stuck an arm out and once again came up with an important save for the visitors. Indy found themselves attacking the Memphis defense 10 minutes later when Rece Buckmaster whipped in a curving cross from the right of the penalty box that pinged off the head of Hamilton, but the nodded effort bounced wide before being cleared out of play. The choppy first half featuring 19 combined fouls ended minutes later with the Eleven unable to capitalize on their 60% of possession held.

After asking a plethora of questions in the first half, Indy Eleven’s persistent attack eventually found an answer in the opening moments of the second stanza. In the 47th minute, Hamilton laid off Law’s diagonal ball for Vassell, who dribbled it over to Moon. After darting through the heart of the visitor’s defense, Moon drove the ball into the far post and out of Morton’s reach to notch his second goal of the season. Unfortunately, Indy’s lead was short lived as Memphis hit back just four minutes later to level the match. Dacres danced around in the outskirts of Indy box before taking a shot that deflected off the leg of an Indy defender and, unluckily, right to the feet of Salazar. The 28-year-old settled the ball and fired it into the back off the net from close range for his second goal of the season, both of which have come at Carroll Stadium.

A slew of substitutions in the 63rd minute saw the attack-minded trio of Cammy Smith, Manuel Arteaga and Gordon Wild enter the match for the Boys in Blue. Their impact was felt nearly instantly as Indy’s next chance came four minutes later when Wild chased a long ball down and crossed to Arteaga inside Memphis’ box. Though the Venezuelan appeared to be shoved while trying to size up the ball, but play continued as the ball rolled out to Moon for a curling shot, forcing Morton into tough save for an Eleven corner. Wild swung the ensuing dead ball to Jared Timmer in the heart of the area, but the Butler University alumnus nodded the chance wide.

After a lot of back and forth and no anxiety-inducing chances for either side, Memphis quite nearly found a winner in the 88th minute. A 901 FC cross found the feet of Logue, but the center back wound up and blasted a shot that went over the bar and into the Brickyard Battalion. Time dribbled away after that chance and the final whistled sounded, with Indy feeling sightly hard done not to get all three points and settling for a second consecutive 1-1 result – not counting its abandoned game last weekend in Oklahoma City that ended on a similar scoreline after 46 minutes of action.

Indy Eleven returns to Carroll Stadium one week from tonight on Saturday, July 24, when it hosts Birmingham Legion FC (7W-4L-1D, 22 pts., 2nd in Central Division) for the Alabama side’s second visit to “The Mike” in three weeks’ time. Tickets for the 7:00 p.m. ET kickoff on “Keep Indy Live” Night are limited but still available and can be secured by visiting indyeleven.com/tickets or by calling 317-685-1100 during regular business hours. Fans who can’t make it can follow the action on WISH-TV 8, ESPN+, Exitos Radio 94.3 FM/exitos943.com, and the @IndyElevenLive Twitter feed, presented by Central Indiana Honda Dealers.