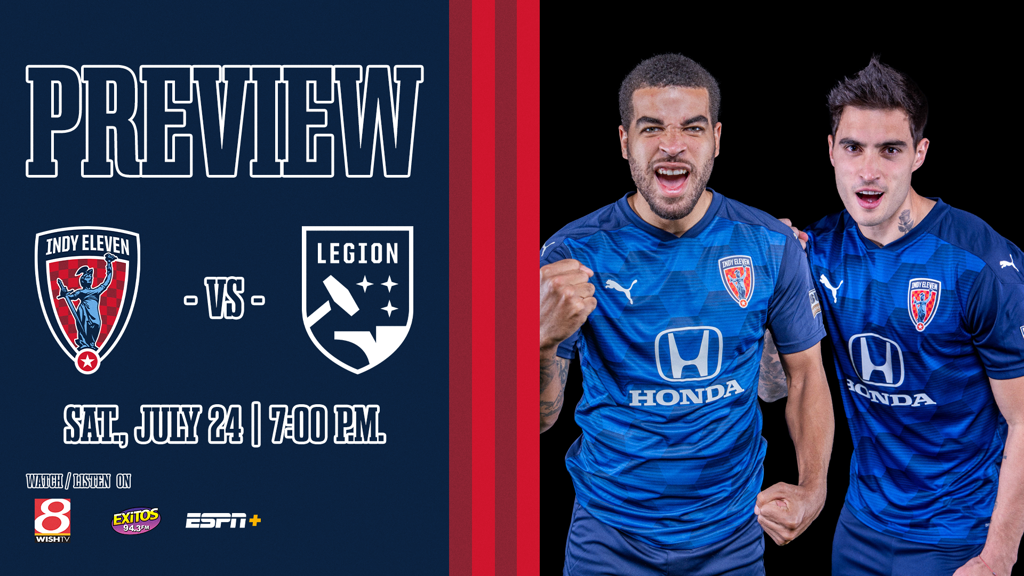 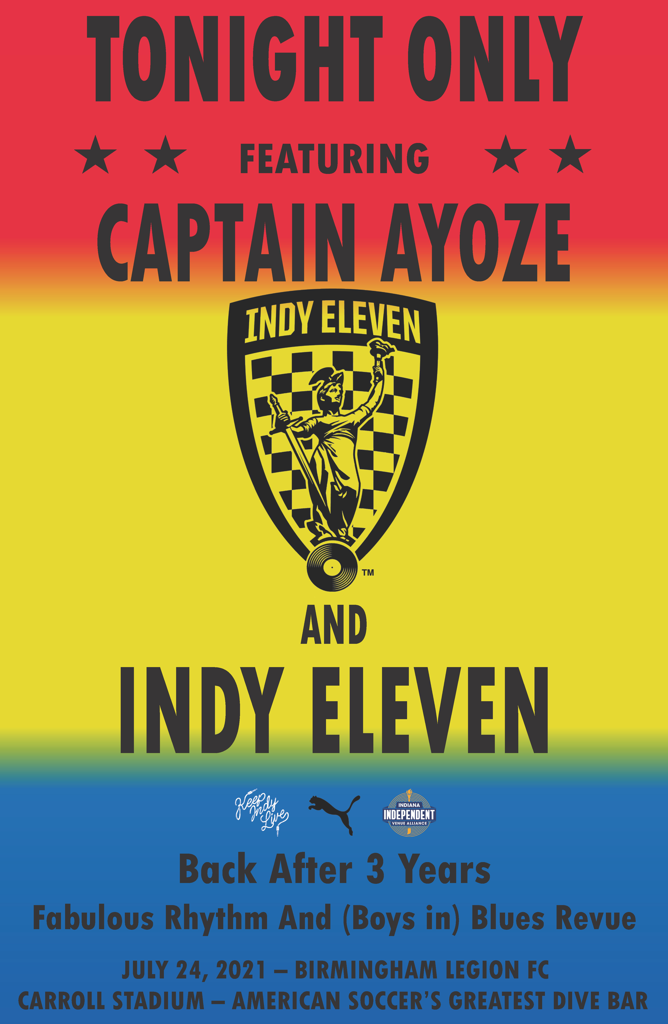 Be sure to pick your Keep Indy Live Night/ #INDvBHM poster up at the Customer Service tent on the West Concourse while they last! 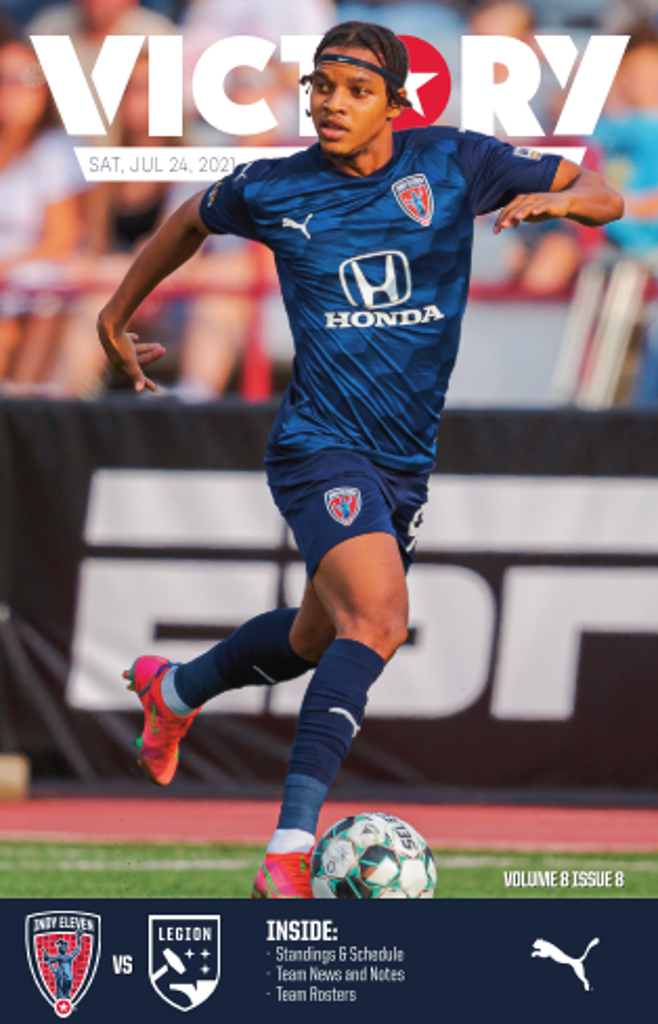 Indy Eleven trots into Saturday’s match against Birmingham Legion FC looking to put a “W” in the victory column at home for the first time since late-May, coming off the heels of a 1-1 draw at Carroll Stadium last Saturday against Memphis 901 FC. While it wasn’t the full three points the Boys in Blue had hoped for, the result did snap a three-game home losing streak – a small sign of progress for a squad that knows how important establishing home-field advantage at “The Mike” will be heading into the second half of the season.

That’s just part of a proverbial “glass half-empty or half-full” approach that can be taken when putting Indiana’s Team under the microscope as of late. Indy Eleven sits in fifth place in the Central Division heading into the weekend – and while that sits just outside of the playoff line, a win on the weekend could see Indy vault into third on the table. After a tumultuous start to June that saw Indy go 0W-3L-1D, since Max Rogers’ interim head coach appointment just over a month ago the Eleven have gone 1W-1L-3D. On one hand, it’s a sign of the tide turning as the team adjusts to new leadership on the fly; on the other hand, all three draws left Indy wanting for more after it held the lead in each contest. That said, the five games with Rogers at the helm has seen Indy steady the ship and find ways to achieve results, and in such a hyper-competitive division – spots #3 through #8 are separated by just six points - you can bet every hard-earned point will mean something come the end of the season.

Back to the last time out on Saturday, Eleven forward Nick Moon opened the scoring 47th minute with a full body effort in the box, the placement in the back of the net his second of the season. Unfortunately, Memphis answered back just four minutes later after an in-swinging cross into Indy’s box took an unlucky bounce to Michael Salazar for a shot and a goal. The theme of dropping points was foremost on the mind of Rogers & Co. in the aftermath of the match, and you can imagine that should Indy take another lead on Legion FC this weekend, every fan in the stadium might be able to hear the word “focus” being shouted in a Scottish/English-hybrid brogue from the far sideline.

Indy will be down a man entering Saturday’s match as Scottish striker Cammy Smith returned to the United Kingdom earlier in this week due to personal reasons, his departure leaving a hole in an attack that was starting to click. Defender Neveal Hackshaw has returned from international duty after Trinidad & Tobago was eliminated from Concacaf Gold Cup play, but will remain off the team sheet this week as he recovers from an illness that left him a late scratch from the Soca Warriors’ tournament finale last Sunday. Goalkeeper Jordan Farr and midfielder Carl Haworth continue to make positive strides while rehabbing from injury, but we’re still likely a few weeks away from seeing either one of them on the pitch.

Though down a few players, the combination of Nicky Law and Gordon Wild could pay huge dividends in Indy’s playmaking efforts. Law currently leads the team in chances created with 24 key passes, with Wild trailing by two. However, Wild leads Law, as well as the rest of the team, in assists with three to his name. Moon also enters the conversation having tallied two goals, two assists and nine chances created while marshalling the right flank. While fans have only seen a small sample size from Rece Buckmaster and Jeremiah Gutjahr so far this season, the Indiana University alums are options Rogers has called upon the last two times out (and really three times when counting the abandoned match at OKC Energy two weekends ago) – and it wouldn’t be a surprise to see them in the XI once again on Saturday.

Birmingham Legion FC enter this contest well rested, having not played in 14 days, and in good position, sitting second on the Central table, four points behind Louisville but with a game in hand on the Boys in Purple. In its last game on July 10th, Birmingham fell to Memphis 901 FC in a shock 1-0 result at home, failing to score for only the second time this season.

Despite its second place perch, offensive success has not been the Three Sparks’ strong suit this season, the team currently tied for second in fewest goals scored in the Eastern Conference (11), and with eight of those coming from striker Neco Brett alone. But you don’t always need a great offense when you have a great defense; Birmingham has only conceded nine times this season, the least amount of goals allowed in the East and second fewest across the entire Championship with only El Paso Locomotive (8) allowing less. Former Indy Eleven loanee Alex Crognale along with Phanuel Kavita and others have been throwing the hammer down in defense, with ‘keeper Matt Van Oekel acting as the anchor in goal.

Both Indy and Birmingham have claimed victory on the other's home ground this season, and both teams doing so by claiming 1-0 victories. Indy Eleven won its season opener on the back of a Manuel Arteaga goal in the first half that saw the Boys in Blue triumphant on a beach-like BBVA Field pitch. Birmingham returned favor just three weeks ago, however, taking all three points following a questionable point to the penalty spot – and subsequent conversion by Brett – in the club’s first trip to the Circle City this season. (Bonus Fun Fact: the July 3 game was the first of their four meetings to date that did not feature a red card.)

The Boys and Blue and Legion FC split their season series in 2019 at one game apiece, showing just how even these clubs have been in their short history. Indy entered the win column in the first-ever meeting between the two sides in a 3-0 thumping that saw goals from Tyler Pasher and Thomas Enevoldsen as well as a Three Sparks own goal. Indy wasn’t as lucky the second time around, dropping points in a 1-0 loss in the first trip to BBVA Field that September.

Indy has deployed one central forward throughout the majority of its 2021 USL Championship campaign – it has often just been the question of which in-form forward makes the starting eleven. Both forwards have their strengths and help the Eleven’s offense in different ways, Arteaga proving adept at getting in behind and pressuring back lines into mistakes, while Hamilton positions himself as a central target man in the final third and a primary target on set pieces. The strike duo has half of Indy’s 14 goals to their credit, Hamilton leading the team with four and Arteaga netting three (and really four, but we digress).

When looking ahead to Saturday’s, each forward has an argument to start. Hamilton has arguably had the better run of play of late, scoring against Atlanta United 2 on July 7 and contributing an assist in the first half of the abandoned match at OKC Energy three days later.  Hamilton earned the start last weekend against Memphis, registering a shot on target and a chance created that led to Indy’s goal, along with proving a reliable outlet in hold up play. However, Indy’s attacked looked rejuvenated once Arteaga (alongside Law & Smith) stepped on the pitch in the 63rd minute, the Venezuelan creating a chance of his own while also contributing one shot. With Arteaga already scoring once against Birmingham this season, it’s not an easy choice for Rogers to make when it comes to penciling only one of their names into the starting lineup, but you can rest assured you’ll see both forwards having chances to contribute against one of the league’s premier defensive units.

The man in goal for Birmingham has been a force to be reckoned with so far this season. Van Oekel is currently ranks tied for fourth across the league with 40 saves and is second in clean sheets (5). The 34-year-old is certainly no stranger to Indy Eleven and Carroll Stadium, as the 34-year-old was a longtime target of the Brickyard Battalion during the old NASL days while suiting up for Minnesota United (2014) and FC Edmonton (2015-16) prior to his return trips with Birmingham in recent years.

The Chesapeake, Virginia, native signed with Legion FC in 2019 and has faced Indy four times since then, keeping two clean sheets, one during the 2019 USL Championship season and one in his last match against Indy at Carroll Stadium on July 3rd. Van Oekel made three saves in that match and denied Indy only once in their first meeting this season while conceding a goal in Indy’s 1-0 victory on May 1st. Having allowed multiple goals only twice across his 12 starts so far in 2021, Van Oekel has shown the ability to contain opposing offenses and consistently keep his team in the match, a blueprint Indy will look to crack for another win against the Hammers on Saturday.